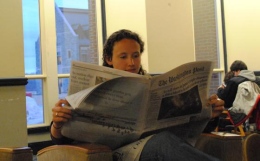 GUSA brought back the Collegiate Readership Program Monday, replenishing newsstands around campus with free daily copies of The New York Times, The Washington Post and USA Today after funding shortages had forced a hiatus that began in September.

The program, which offers complimentary newspapers to students on weekdays only, was stalled until the new GUSA leadership began their tenure last month.

At the Feb. 27 GUSA budget summit, the Finance and Appropriations Committee allocated $14,000 toward the readership program upon a request from the GUSA executive. This sum will fund the program throughout the rest of the spring semester, as well as the next academic year.

According to Laverriere, the rise in student activities funding as a result of Student Activities Fee and Endowment Reform made it possible to bring the program back and ensure its sustainability.

“We decided to bring it back because the Collegiate Readership Program is an extremely well-liked initiative that suffered from a lack of a permanent funding source,” Laverriere said. “Newspapers benefit students in multiple ways including helping them prepare for job interviews.”

Fin/App committee member Tyler Sax (COL ’13) was also key in negotiating the contract with USA Today and establishing the three locations in the program’s revival, according to Laverriere.

Students expressed their enthusiasm for the renewing of the program.

“I’m glad they started readership again. It’s very convenient since I can pick up a copy on my way to class,” Sharanbir Grewal (SFS’13) said.

According to Interhall’s Vice President of Student Advocacy Shea Houlihan (SFS ’13) however, not everyone on campus thought bringing back the program was necessary.

“We exist to serve residents and their interests, and because the Readership Program (for all its vocal support) did not appear to be a top concern [after a survey Interhall conducted], we directed our resources and efforts to serve issues that students reported they cared more about,” he said.