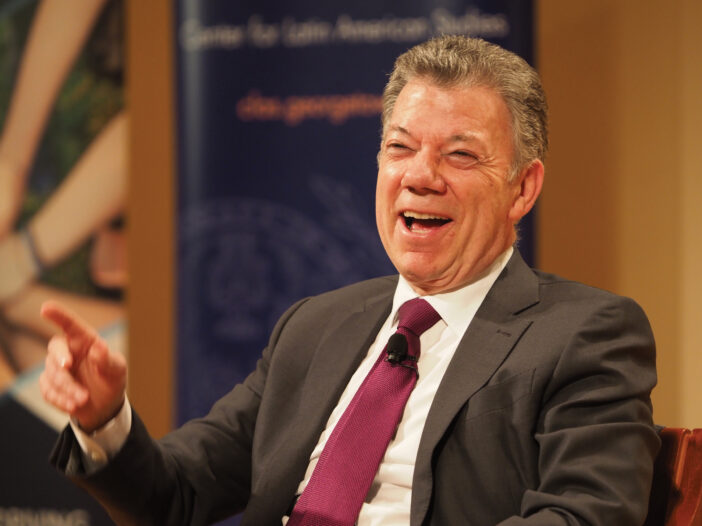 The event, titled “The Colombian Peace Agreement 5 Years Later: A Conversation with Juan Manuel Santos,” featured the former president in conversation with Alejandro Werner, founding director of the Georgetown Americas Institute, a university platform that aims to advance research, teaching and impact on policy decisions and challenges in Latin America. The event, which was held in Lohrfink Auditorium, was hosted jointly between the Georgetown Americas Institute; the School of Foreign Service (SFS); the Latin American Policy Association, a policy group in the McCourt School of Public Policy that discusses and debates policies around Latin America; and the Center for Latin American Studies, an SFS research and policy organization focused on the region.

The event falls five years after the signing of the Colombian Final Peace Agreement in November 2016 between Santos and the leftist Revolutionary Armed Forces of Colombia (FARC), which ended over 50 years of violent conflict that killed over 260,000 people and displaced millions more.

Colombia’s Final Peace Agreement focuses on restorative justice instead of punitive justice, where the victims are centered in the response to the crimes and perpetrators acknowledge responsibility, according to Santos.

“You don’t send the people that have committed crimes against humanity, war crimes, to jail,” Santos said at the event. “You judge them, you condemn them and you send them to an alternative punishment, which is repairing the victims, and that is exactly what we are doing now. In the process, and this is the first time that this has been done, we put the victims and their rights in the center of the negotiation.”

FARC leaders and others who committed crimes during the war have begun to admit responsibility for human rights abuses, according to Santos.

“Many of the FARC leaders have recognized that they are responsible for crimes against humanity, war crimes; they have said ‘I’m sorry’ to the victims, and we are in that process,” Santos said. “Difficult process, but it’s a necessary process because that is the way to heal the wounds. It takes time.”

Since the signing of the peace agreement in 2016, multiple ex-FARC leaders have admitted accountability for war crimes, including four former commanders who accepted accusations of crimes against humanity in February 2021.

To build a successful negotiating team, people from all groups and perspectives should be represented, according to Santos.

“The group that I created was a heterogeneous group that represented the different factors that had usually been against the peace process,” Santos said. “We brought in aspects which were important, including women in the negotiating team, and the indigenous communities and the ethnic aspect.”

With the perspective from indigenous communities and other groups within the country, many of the agreement’s proposals aim to improve sustainability and empowerment, Santos said.

“That’s why the agreement has an ethnic chapter that has very progressive proposals with the indigenous communities and the Afro-Colombian community, which, if implemented, will solve many of the problems we have right now,” Santos said. “Today, the best thing Colombia can do to contribute to this existential challenge to stop climate change is to empower the indigenous communities to protect the most valuable richness that we have, which is our biodiversity, our Amazon, our water fountains.”

Despite diverse perspectives in the peacemaking process, the agreement faced strong opposition from Colombians and other political parties because of the amnesty granted to many FARC members. The agreement failed in a public referendum in October 2016, less than two months before Santos officially signed it with the FARC.

With many different perspectives within a country, peacemaking is a delicate balance that requires compromise and collaboration, according to Santos.