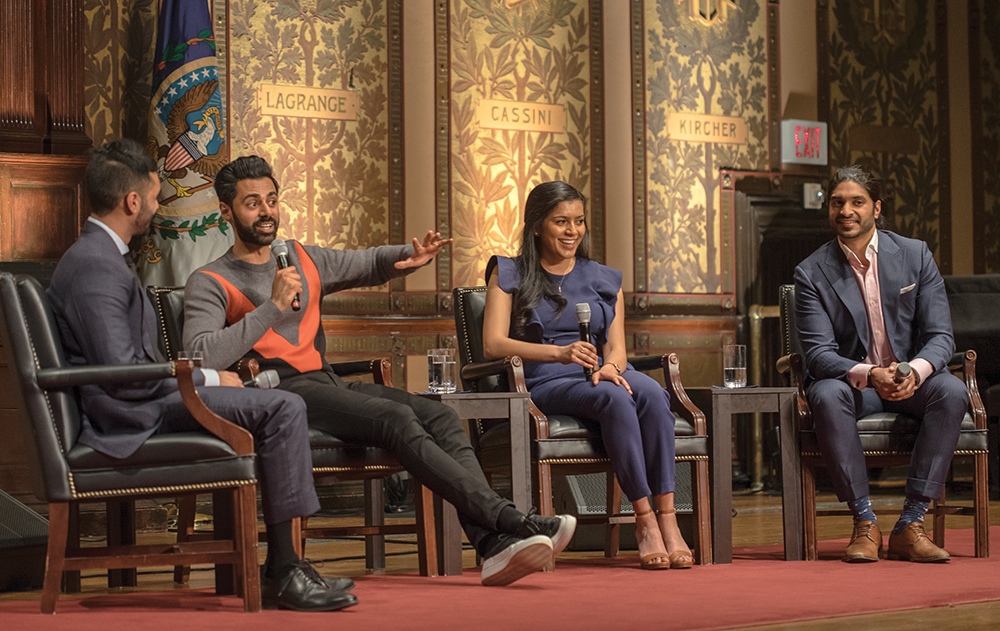 Comedian and political commentator Hasan Minhaj reflected on the role of identity in his comedy and called for the inclusion of diverse perspectives in the media industry March 28.

Both of Minhaj’s parents immigrated to the United States from India and raised Minhaj in the Muslim tradition. In his first stand-up comedy special, “Homecoming King,” which was released in 2017, Minhaj focused on his immigrant family upbringing and experience with racism around his Indian Muslim identity.

Minhaj said his identities as a Muslim and a first-generation American encourage him to define himself on inclusive terms.

Held in Gaston Hall, the event was hosted by the South Asian Society and co-sponsored by 14 other campus groups and offices, including Lecture Fund and the Muslim Student Association. The event featured a discussion between Minhaj, SAS President Vishal Menon (MSB ’19) and former SAS Presidents Vinoda Basnayake (MSB ’03) and Bhavya Jha (SFS ’17) and was followed by questions from the audience.

Minhaj hosts a weekly news-comedy show, “Patriot Act with Hasan Minhaj,” which premiered on Netflix last October, making Minhaj the first Indian-American host of a weekly comedy show. The show has covered topics including the 2019 Indian general election and political censorship in China. He has also commented on the death of Washington Post journalist Jamal Khashoggi in fall 2018, in an episode the Saudi Arabian government demanded Netflix remove.

Minhaj also previously served as a senior correspondent for “The Daily Show with Trevor Noah” and was the featured comedian at the 2017 White House Correspondents’ Dinner.

Leading roles held by members of minority communities increased 13.6 percent from the 2011-2012 to the 2015-2016 seasons, according to the 2018 Hollywood Diversity Report from the University of California, Los Angeles. The increase in diversity has been significant not only on the screen, but also during the production process, according to Minhaj.

“Over the last five or six years there has been a big push for inclusion and diversity in the writers’ rooms and in casting in shows, which I think has been a big win for everybody. I’ve seen that shift, and that has been really great,” Minhaj said. “A lot of time people think that inclusion and diversity is just in front of the camera, but there has been a lot of behind-the-camera stuff, in terms of the creation of the ideas producing the projects and all that stuff; that is a big deal.”

Universities and other communities should uplift diverse performers and empower new voices to share their perspective and humor, according to Minhaj.

“I think the good thing, and I think the thing that Georgetown and a lot of schools can tap into, is just give that stage to a diversity of voices,” Minhaj said. “Whether it’s South Asian female voices, whether it’s queer voices, let those performers perform.”

The “Patriot Act” news team and writers seek to amplify underreported stories that shed a light on little-known but nonetheless important issues, according to Minhaj.

Minhaj has been outspoken about college admissions practices on his Netflix show, criticizing a lawsuit by Asian-Americans suing Harvard University over the university’s admissions policy. In the show’s premiere episode, Minhaj accused the plaintiffs of potentially jeopardizing affirmative action with their suit, which alleges the university discriminates against Asian-Americans in its admission process.

In an interview with The Hoya before his event, Minaj commented on his views on the recent admissions scandal affecting Georgetown.

A March 12 Department of Justice indictment alleged that former Georgetown tennis coach Gordon Ernst accepted bribes from parents in an admissions scheme involving seven other universities. Ernst falsely designated at least 12 applicants as recruits for the Georgetown tennis team, according to the indictment.

The admissions cases should start a dialogue around the value universities place on legacy admission, according to Minhaj.

“I think it has opened up a conversation around legacy admissions and I think that that is a big topic, especially because we are talking about meritocracy and everyone having an even playing field when they are applying to go to school,” Minhaj said in an interview with The Hoya.

Minhaj said the DOJ allegations of admissions fraud at Georgetown and other elite universities did not shock him.

“I wasn’t surprised at all,” Minhaj said in an interview with The Hoya. “I think we saw a lot of these stories coming out from the sports world before, and now that something so public is happening in academia I think, you know, I was disappointed to hear about it but I wasn’t surprised.”