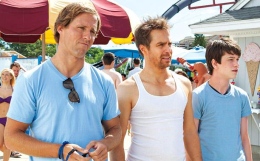 There’s something about water parks that makes everyone nostalgic.

The Way, Way Back, directed and written by Nat Faxonand Jim Rash, tells the story of Duncan’s (Liam James) coming of age. Or the equivalent of a coming of age story in the context of a potentially awful summer turned quirky and upbeat by a job at a water park.

The movie opens with 14-year-old Duncan stuck in what looks like a car ride from hell with his family: Mother (Toni Collette), her good-for-nothing boyfriend Trent (Steve Carell) and Trent’s daughter (Zoe Levin) on their way to Trent’s summer beach house. Duncan, painfully awkward and apologetically hunched over, finds refuge working at Water Wizz, an’80s style water park, away from those who find everything wrong with him, and he makes actual connections with others. By the end of the movie, Duncan’s friendships allow him to have the confidence to assert himself to Trent and his summer love interest Susanna (AnnaSophia Robb).

Amid all the action/sci-fi/adventure blockbusters this summer, the character growth in this film is what sets this movie apart from others you may watch. While this is primarily Duncan’s story, his narrative provokes development in the key figures in his life, namely his mother and his temporary summer mentor, Owen (Sam Rockwell).

At first, it seemed Faxon and Rash were trying a little too hard to convey Duncan’s awkward stage. Duncan isn’t the kind of adorkable Zooey Deschanel in “New Girl” type of awkward. He’s the kind of cringe-worthy awkward that’s almost too painful to watch. Duncan seems unable to hold a conversation with fellow characters, and his stony silences made audiences squirm in their seats.

But characters like Owen and Trent make up for the grandiose portrayal of teenage-boy angst. Owen, a laid-back waterpark employee, easily disarms everyone he meets with his sarcastic banter and acceptance of everyone at face value. Owen – who gets along with everyone –  is a saving grace for someone as uncomfortable as Duncan. On the other end of the spectrum is Trent, who, for lack of a better word, is just the worst. Probably the weirdest part of the film was watching Steve Carrell act like a jerk. Perhaps he was tired of playing the adorkable, kind-hearted middle-aged man like he did as Cal in Crazy, Stupid Love and as Michael Scott on “The Office,” but Carrell surprises the audience with bad behavior and bullying throughout the film.

One relatable truth really made this film worth the watch: Faxon and Rash did a wonderful job capturing the human oddity that is the phenomenon of growing up during the summer months. Thedialogue was mostly witty, the characters mostly believable, and the plot — though predictable — was mostly upbeat. Kind of like life.

I won’t give away the ending, but I will say it’s optimistic, though not a grand gesture of drama. But real life and real growing up doesn’t happen with perfect banter, cartoon characters and complex plot turns. We’re all just human, and while that can be a great thing when it helps us get a better understanding of who we are, it can also mean that we’re never perfect, either.

The Way, Way Back reminds us to celebrate the human experience. It’s the perfect way to escape from the ocean of action/adventure blockbuster films coming our way this summer while reminiscing on the growing up we did during our own awkward family vacations.