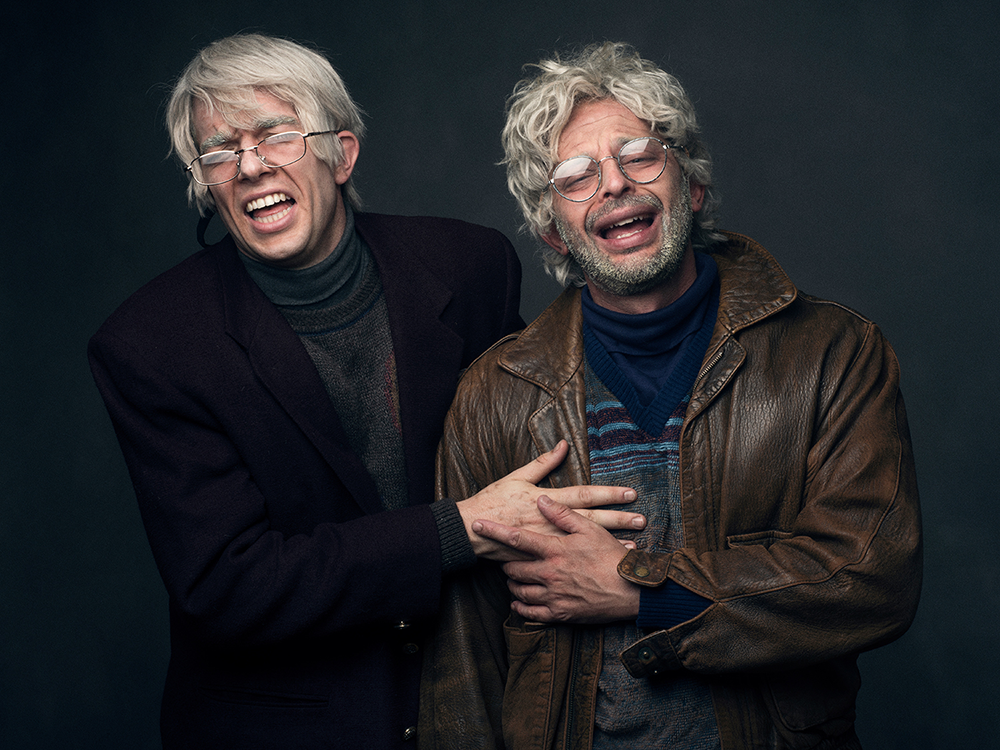 Feb. 16 marks the arrival of two alumni whom the Lecture Fund, and most of campus, are calling “comedy legends of Georgetown.” Nationally acclaimed comedians Nick Kroll (COL ’01) and John Mulaney (COL ’04) will take the stage of Gaston Hall this Tuesday in light of their show, “Oh, Hello,” which will run at Warner Theater the same week. But what did these two hilarious Hoyas have to say about the title “comedy legends?”

“That is very ridiculous and funny and incorrect and … ridiculous,” Mulaney said in an interview with The Hoya.

Despite disagreeing on the designation, Kroll and Mulaney said they are excited to return to their alma mater, where the two first met as members of the GU Improv Association then known as the Georgetown Players Improv Troupe.

“It will be really cool to be on stage in Gaston. We were there as an improv group hosting the Cherry Tree Massacre and I would go see people speak there all the time,” Mulaney said.

Much has changed since Mulaney and Kroll were undergraduates. They inquired about the whereabouts of two homeless men who heckled and joked with every person coming in and out of Wisemiller’s; they told stories of New South and Harbin dining halls. Kroll asked if the a cappella group to which his roommates belonged still wore mock black turtlenecks as its unofficial uniform.

However, some things remain exactly the same. Kroll and Mulaney mentioned that they frequented Uncommon Grounds, where Mulaney would religiously buy biscotti, and Vital Vittles, where Kroll would clean out the milk section in the back.

Mulaney, fitting the busy Georgetown student archetype, said he was more of a night owl.

“I was living like a vampire. … Get to Lauinger at 11 p.m. and be there until 5 a.m. I was on that type of schedule. I didn’t even feel like the day was getting started until the sun was going down,” he said.

After they met at Georgetown, Kroll and Mulaney continued to perform together. Kroll began writing for shows on Comedy Central and MTV, while Mulaney launched a successful career as a standup comedian and a writer for “Saturday Night Live.”

“We got very lucky that we met such a good group at Georgetown and started our careers that way and now I think about how … almost 15 years later, that we’re still performing together and having so much fun. It’s just the most gratifying thing, both to be on stage and also to say I’ve been performing with this person for so long,” Kroll said.

Their most recent venture, “Oh, Hello,” is an off-Broadway and touring show following two characters named Gil Faizon and George St. Geegland. The two characters were first featured on “Kroll Show,” Kroll’s Comedy Central series that ran from 2013 to 2015, and have since become audience favorites.

The duo got the inspiration from these characters after seeing two old men in the popular New York bookstore, The Strand, buying copies of Alan Alda’s autobiography, “Never Have Your Dog Stuffed and Other Things I’ve Learned.”

“They looked like guys we would be interested in watching,” Kroll said. “We then followed them and they went to a diner nearby and both started reading their copies. We just sort of fell in love with them.”

While these two particular men sparked the inspiration for Kroll and Mulaney, they say they have seen this type of person before and were thus compelled to create these characters for “Oh, Hello.”

“We inherently knew that type of person. That sort of older person that thinks they’re an intellectual just because they wear turtlenecks and acts progressive and liberal, but is also kind of secretly racist. It’s just a type of person that we knew really well: a super fussy person who would get upset with everything,” Mulaney said.

Georgetown students will have a chance to catch the show at the Warner Theater on Feb. 14, 15 and 17, or hear the duo speak in Gaston Hall on Feb. 16.

A longer feature on Kroll, Mulaney and “Oh, Hello” will run in Friday’s issue of the Guide.