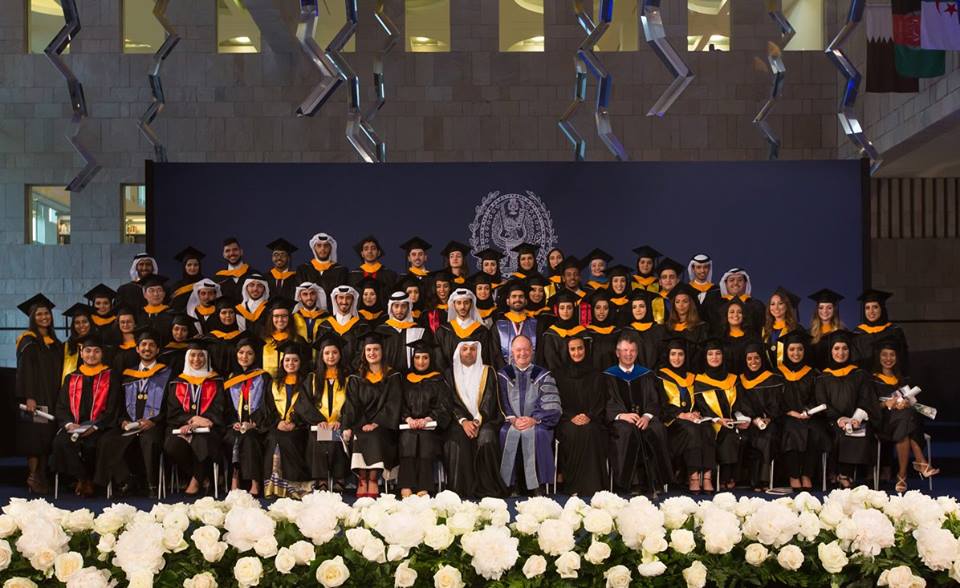 Yesterday’s senior convocation and the McCourt School of Public Policy’s commencement ceremony marked the official beginning of the 2017 graduation season — the crowning event for students nearing the end of their graduate or undergraduate studies at Georgetown.

“I would urge this class to do two things: The first is practice the art of engaging with people who think differently from you. … Find the other side or sides and engage them in meaningful dialogue,” Rivlin said. “Second, I would urge you to go into politics at some level — any level. Elected politics will not get better until competent, well-informed, well-motivated young people, like McCourt graduates, decide to make it better.”

Ceremonies are set to continue today with the Graduate School of Arts and Sciences commencement in the morning, followed by the McDonough School of Business graduate program and the School of Continuing Studies commencements in the afternoon.

On Saturday morning, Georgetown College students will attend their commencement, followed by ceremonies for the School of Nursing and Health Studies, the MSB undergraduate school, and the School of Foreign Service in the afternoon. Commencements conclude Sunday with the Medical School and Law Center ceremonies.

This year’s speakers include a wide range of accomplished figures, each of them set to receive honorary doctorate degrees during their visits and to impart their perspectives on graduating students.

Today, the organization operates 700 units of housing for people experiencing homelessness nationwide, as well as three businesses staffed by formerly homeless employees, according to the Project HOME website.

Previewing her speech in a question-and-answer interview posted to the Georgetown College website, Scullion offered advice for soon-to-be College graduates about how to pursue lives motivated by a pursuit of social justice.

“In addition to getting an excellent academic education, it’s equally important to work directly with, know and walk beside people in our society and in our world who are struggling and suffering — be it people on the street, immigrants or refugees,” Scullion said. “Touch the pain and suffering around us, and through that, help to affect the injustice and suffering, but you too will be transformed. Students often lead by example.”

“I expect Sister Scullion to deliver a speech very much in keeping with Georgetown’s mission and values. She has devoted her life to helping the homeless. She is Jesuit educated (St. Joseph’s University) so she knows first-hand what the Jesuits stand for,” Gillis wrote in an email to The Hoya.

Scullion will also receive an honorary Doctor of Humane Letters degree. She is scheduled to speak Saturday at 9 a.m.

Nate Silver, editor-in-chief of the politics and statistics blog FiveThirtyEight, will deliver the commencement address for students in the SCS. Silver, a leader in the budding field of data-driven journalism, was named one of the 100 Most Influential People in the world by Time magazine in 2009 after he successfully predicted the outcome of the 2008 U.S. presidential election in 49 out of 50 states.

Since Silver founded FiveThirtyEight as an election polling analysis blog in 2008, the website has grown to include blog coverage of politics, sports, economics, science and culture.

SCS Dean Kelly Otter said the school is excited to welcome Silver, particularly because of his data-driven approach and contributions to journalism and sports.

“Mr. Silver has fundamentally changed these industries by merging data analysis with an ability to succinctly communicate an important message. We look forward to honoring him because he has influenced the way that these disciplines are taught and has inspired students to pursue truth through the use of data,” Otter wrote in an email to The Hoya. “Now more than ever, we think that’s incredibly important and worthy of distinction and celebration.”

Silver will receive an honorary Doctor of Humane Letters degree this weekend.

Washington Post political columnist Anne Applebaum, who is also a visiting professor at the London School of Economics, is scheduled to address graduating students from the SFS on Saturday at 6 p.m. Applebaum, a Washington, D.C. native, was awarded a Pulitzer Prize in 2004 for her historical nonfiction book on the Soviet Gulag system, “Gulag: A History.”

In recent months, Applebaum’s column has focused on the global rise of populism and isolationism, and included sharp criticism of President Donald Trump’s campaign and administration.

Applebaum will receive an honorary Doctor of Humane Letters degree on Saturday.

MSB Interim Dean Rohan Williamson said the careers of Coleman and Minson serve as examples of “how our graduates can thrive” after leaving Georgetown.

“The Class of 2017 has accomplished so much during their time at Georgetown. It has been a pleasure witnessing their successes, and I look forward to seeing how they apply all they have learned here to making their unique stamp on the world,” Williamson wrote in an email to The Hoya.

The company invests in three broad initiatives: science, education and technology. Shelton, former deputy secretary of the U.S. Department of Education, now leads the company’s education initiative, which seeks to break down barriers to high-quality education through investment.

Shelton’s work focuses on “developing breakthrough products and practices that address the needs of each student, bringing together the best teachers, researchers, advocates and engineers to tackle pressing problems,” according to the company’s website.