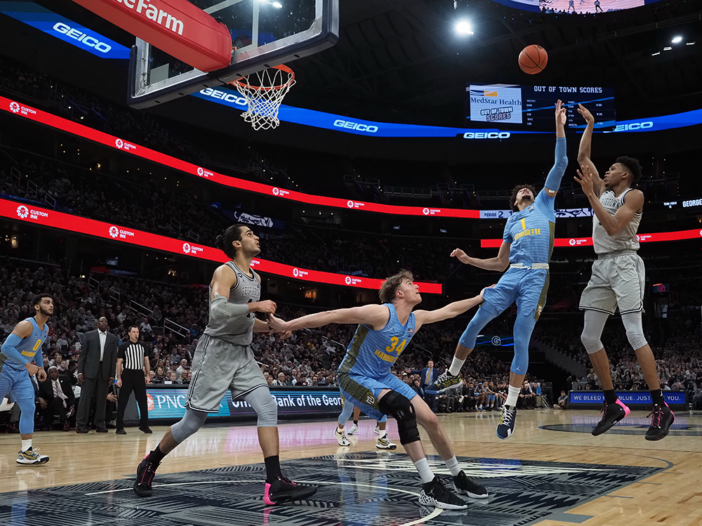 After a tumultuous season, the Georgetown men’s basketball team seemed to finally be returning to normal and gearing up for the 2020-21 season. Then, star sophomore guard Mac McClung announced Wednesday he was not only withdrawing from the NBA Draft but would be leaving the Hilltop and entering the transfer portal, raising questions about where the Hoyas will go from here.

McClung is not the first Georgetown basketball player to transfer under Head Coach Patrick Ewing (CAS ’85) but is, perhaps, the most concerning. McClung is the fifth transfer since December and eighth transfer in Ewing’s brief tenure. Unlike the four transfers in December, however, he is not leaving for off-the-court reasons. In an interview with ESPN, McClung explained that “it was a number of different events that made me feel I had no choice but to transfer from Georgetown.” McClung failed to identify any on or off the court reasons for his departure, but regardless, his transfer makes Ewing and the future of the program look bleak, raising questions as to whether Ewing could have done anything different to keep McClung in blue and gray.

This latest news can be seen in two distinct ways. The first and more pessimistic outlook is that these departures are beginning to become a problematic trend for Ewing and the Hoyas may need to look in a different direction for their head coach soon. It is hard to blame anyone for holding this opinion. Under Ewing, the Blue and Gray have failed to come close to reaching the NCAA tournament and, with yet another depleted roster, it is difficult to see the Hoyas making it in the 2020-21 season either. Georgetown fired former Head Coach John Thompson III following a series of disappointing seasons culminating in a 14-18 record while going 5-13 in the Big East in the 2016-17 season. Ewing’s Hoyas barely topped that last season, going 15-17 and 5-13 in the Big East. If the Hoyas fail to break through in the next few years, especially if players continue to transfer at an alarming rate, it is difficult to see Ewing retaining his position.

There is a more optimistic way to see this situation for Georgetown fans. Last season was supposed to be Georgetown’s breakout season, but it was sullied by transfers and injuries — factors out of Ewing’s control — that seemed to be the result of bad luck. The cause for the four transfers in December was an unprecedented issue for Ewing and there is no reason to believe it will happen again. The loss of McClung remains concerning, but the hope is that he is the last domino to fall among the issues of the past season and not a sign of continuing systematic issues with the once-great Hoya basketball program. Ewing was receiving media acclaim as recently as February after the Hoyas beat then No. 19-ranked Butler on the road despite only having six scholarship players available to play. The team was notably missing McClung, who was out with a foot injury. At that point, Georgetown seemed capable of actually making a push for the tournament despite all of their misfortunes. Unfortunately, the hampered Hoyas began playing like a team that only had six scholarship players, losing the remainder of their games. Regardless, Georgetown fans should not forget that Ewing has demonstrated an ability to win even with subpar talent.

Ewing is going to be the coach of the Hoyas next season and will have a chance to prove he deserves to be Georgetown’s coach going forward. Georgetown making a run at the Big East championship or even the NCAA tournament seems unlikely following McClung’s departure, but the Hoyas should look to remain competitive and fight against their Big East opponents. The Hoyas are not going to be the elite, nationally ranked team many would have expected them to be just a year ago. However, the Hoyas have an exciting group of recruits coming in the fall who should hopefully be on the Hilltop a bit longer than their predecessors. Hopefully, Ewing will finally have a full roster of healthy, talented players who can push Georgetown back into the tournament for the 2021-22 season.  The dream that Georgetown was finally done rebuilding was stalled with McClung’s departure, but the Hoyas may still be just a year or two away. Georgetown fans should remain optimistic that the team has just suffered from some serious bad luck in the past year and hope that, under Ewing’s leadership, they can be dancing in March again soon.