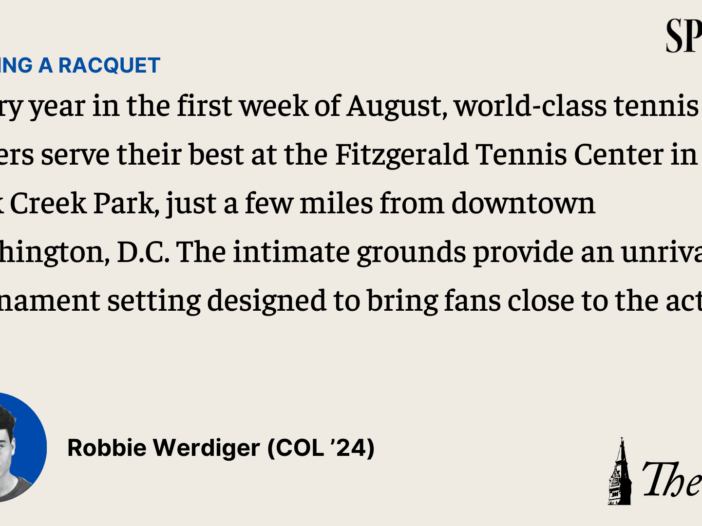 From Benoît Paire having a drink at the Real Azul bar to 2021 US Open champion Emma Radacanu playing ping pong outside the players tent to Nick Kyrgios complaining about his subpar hitting partner during a practice session, the 2022 Citi Open was filled with captivating scenes.

Every year in the first week of August, world-class tennis players serve their best at the Fitzgerald Tennis Center in Rock Creek Park, just a few miles from downtown Washington, D.C. The intimate grounds provide an unrivaled tournament setting designed to bring fans close to the action.

A single path leads from the players’ lounge to the tennis courts, so fans often find themselves bumping into players, who usually offer autographs, pictures and even occasional small talk. All of the courts and amenities on-site are situated around the 7,500 seat main stadium, big enough to conjure up an electrifying atmosphere while providing a great view of the court from every seat.

The atmosphere was not just electric; it was also scalding hot. As the temperature reached 100 degrees in the first half of the week, fans who didn’t have tickets to one of the 31 air-conditioned boxed seating areas had to endure the stifling heat.

Thanks to the heat, a spot in front of one of the electric Powerbreezer fans on the grounds was in even higher demand than a spot next to the freshly shucked oysters, caviar and local favorite dishes that the various on-site Michelin-starred chefs prepared.

The players also had trouble handling the heat. Citing fatigue, No. 3 seed American Taylor Fritz retired from his second round match against Dan Evans late in the third set.

If the heat wasn’t bad enough, rain suspended play on Thursday and Friday, forcing the round of 16 and the quarterfinals to be played on the same day. On Friday, No.1 seed Andrey Rublev played the first match at 12 p.m. then played his quarterfinal match later during the night session.

Despite the quick turnaround, Rublev maintained a good attitude.

“Yeah, it’s part of the sport. I think that’s the fun thing about it, that you don’t know what to expect,” Rublev said in his post-match press conference.

Nick Kyrgios, however, was less amused when his quarterfinal battle with hometown favorite Frances Tiafoe finally came to an end after midnight. The Australian sensation saved five match points in one of the more entertaining matches of the year.

When asked about his emotions after the match, the newly crowned two-time Citi Open champion replied that the week had been difficult with drug tests, rain delays and late night matches that put Kyrgios on a semi-nocturnal schedule, preventing him from going to bed until 4:50 a.m. on Friday.

Despite the constant chatter and quarrels with his box and the umpires that viewers have become accustomed to with Kyrgios, the world No. 63 was all business this week, as he avoided any fines. The 6’4” showman remarked about how he was hyperfocused on every match, hoping to improve his ranking, which suffered from the absence of points at Wimbledon.

A few weeks after losing to Novak Djokovic in the Wimbledon final, the 27-year-old Kyrgios  captured both the singles and doubles titles, an unprecedented feat he considers more special than his Wimbledon run. With the historic result, Kyrgios ended his three-year singles title drought.

Kyrgios held serve all tournament, blasting 96 aces throughout his six singles matches. With the 500 points awarded to the champion, Kyrgios will jump to No. 37 in the Association of Tennis Professionals rankings, putting him in a good position to secure a seed at the U.S. Open with a couple of Masters 1000 events coming up.

After a tumultuous career and battle with depression, Kyrgios is finally in a peaceful mental state and is starting to maintain a high level of performance, having made the semifinals or better in five of his last seven events.

During a press conference at the Citi Open, Kyrgios told The Hoya that his relationships and love in his life are keys to his success and drive.

“Look, I think just being at peace with your life definitely helps. I think everything around me right now is amazing. You know, I’m fortunate enough to be in a really healthy relationship that’s loving, she supports me, and we just have fun,” Kyrgios said.