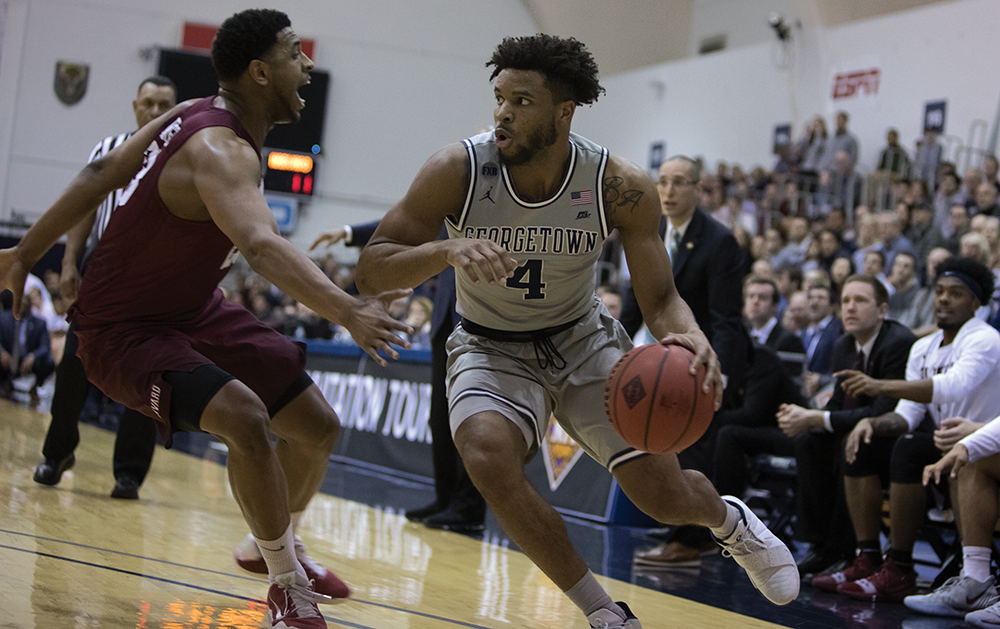 There will be more excitement for Georgetown men’s basketball on campus for the 2021-22 season than any year in recent memory. If the COVID-19 vaccine distribution is widespread and successful, fans will be able to return to the games, replacing the cardboard cutouts reminding us of social distancing. Not only that, but Georgetown’s team is also projected to be the best it has been since Patrick Ewing (CAS ’85) returned to the Hilltop as head coach in 2017. The Hoyas currently have the No. 11 recruiting class for the class of 2021, according to 247 Sports.

However, one thing students aren’t looking forward to next season is the dreaded 3-mile bus ride to the home gates at Capital One Arena. In order to increase school spirit and encourage more fans to attend games, Georgetown men’s basketball should begin playing home games in the McDonough Arena on campus in 2021.

Georgetown’s incoming first-year class is one of the best in school history and currently one of the nation’s 10 best. Led by guard Aminu Mohammed, the program’s first five-star recruit since 2014, the talented five-player class looks to bring the Hoyas back to national relevance and March Madness, though the team will not be able to do that from Georgetown’s beautiful campus if the games are played a long bus ride away.

Capital One Arena is a favorable venue to watch a basketball game, but too often Georgetown’s home games end up without enough fans to completely fill the lower bowl of the arena. Many of the early-season non conference games, with the notable exception of the home game against rival Syracuse Orange, end up with only a few buses full of students behind one basket and minimal fans on either end of the court. Even in Big East play, a highly anticipated annual event when the Hoyas host their rivals from Villanova, St. John’s and Seton Hall, Georgetown can rarely fill out the lower bowl of the arena.

Instead, Georgetown should transition to hosting games at the McDonough Arena, a gymnasium that also honors Georgetown’s legacy much more than Capital One Arena. Shortly after becoming head coach of the men’s basketball team, John Thompson Jr. renovated the lighting in McDonough to make it look TV ready, as he said in his autobiography, “I Came As a Shadow,” published shortly before his death in 2020. Since his retirement, Georgetown has further renovated the gym, ensuring it meets the quality expected of a Division I college basketball court. It has appropriate locker rooms and banners recognizing the postseason accomplishments of both the men’s and women’s basketball teams.

In my first year of college, in March 2019, Georgetown men’s basketball played against the Harvard Crimson in the National Invitational Tournament on only two days’ notice, and the game was hosted in McDonough Arena. The student body came out in droves because of the convenient location. Despite its small size, the gym was crowded that night with Georgetown and Harvard fans alike. It was one of the loudest nights of my first year.

If the student section can overflow at McDonough for a nonrivalry game when the team is coming off a bad loss to Seton Hall in the Big East tournament, future conference games could receive an unprecedented turnout. Maybe the biggest games against Syracuse, Villanova and Seton Hall still belong in a big venue, especially during the highly anticipated 2021-22 season, but more games should be played at McDonough to ensure students can easily show up to support Georgetown men’s basketball, guaranteeing fewer spare seats in the student section. Bringing home games back to McDonough would certainly revive long-missed Hoya spirit.