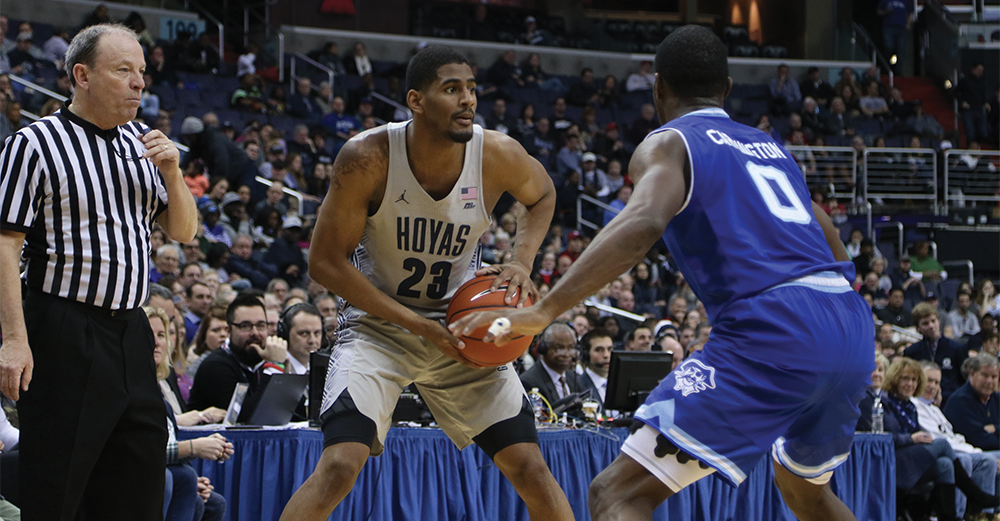 Immediately after the final buzzer sounded at an exasperated Verizon Center on Wednesday night, music blared to drown out an all-too-familiar chant from the departing students and fans: “Fire Thompson!”

A 67-65 loss to Big East basement-dweller DePaul did more than guarantee the Hoyas another losing season in conference play; it affirmed the growing lack of faith that the student body has in the basketball program and its head coach.

It is time that someone said it. President John J. DeGioia, it is time to remove Head Coach John Thompson III from his position at the head of the Georgetown men’s basketball team.

We, the student body is told, are Georgetown. If that is the case, then the past two seasons have been an insult to all of us. Georgetown is not feared, respected nor nationally relevant anymore. We, the students, are all too aware; it is the athletic department, DeGioia and Thompson who choose to remain blissfully ignorant.

Georgetown is still Georgetown, but it is not your parents’ Georgetown. The program needs to change soon or risk being altered by a rising tide of apathy among students.

It was not supposed to be this way. Georgetown expected to be the dominant force in a new Big East, one filled with schools formerly in mid-major conferences and unthreatening teams from the original Big East.

Only three years later, the program’s arrogance is receiving its deserved punishment. Georgetown has a 32-37 regular season record in the new Big East, no titles of any sort and one NCAA Tournament appearance in three — soon to be four — years.

Sporting a 5-10 record, the Hoyas occupy sole possession of ninth place in the 10-team conference. Georgetown has become a liability for the relatively new conference instead of one of its assets.

Two main reasons exist for the decline of Georgetown’s program: the inability to attract top-tier talent and the refusal to change and adapt schematically. The responsibility for both of these, as in any program, falls on the head coach.

First, Georgetown is no longer a viable contender for the nation’s best recruits. Even in the Blue and Gray’s own backyard, Maryland’s recent successes make competing for DMV recruits all the more difficult.  Kris Jenkins and Josh Hart — both national champions at Villanova — grew up Hoya fans and attended Gonzaga College High School and Sidwell Friends School, respectively. However, in the recruitment process, Georgetown lost out on Hart and failed to pursue Jenkins.

Two decades ago, Georgetown could use talks of Final Fours and a national title to lure recruits to the Hilltop, but today, a 2007 Final Four seems like ancient history to current recruits who were in elementary school a decade ago.

Additionally, the player development from recruited talent has been underwhelming, if not outright disappointing.

For example, Isaac Copeland was rated by 247 Sports as the 24th best player nationally in the class of 2014 but failed to realize his potential. In two-plus seasons here, he averaged fewer than nine points and five rebounds per game, and has since transferred to Nebraska.

Recruiting aside, Georgetown’s system is primarily responsible for the team’s 14-14 record. Thompson has always advertised himself as a defense-minded coach, but for the past four seasons the defense has been mediocre at best. Since 2013, the Hoyas have not finished a season higher than 110th in defensive efficiency.

This year’s defense ranks 116th in efficiency, 302nd in fouls per game and cedes opponents just fewer than 10 offensive rebounds per game. This is not tough or smart defense — statistically, this is bad defense.

The offense is not much better. Despite immense innovations in basketball over the past decade, Thompson’s beloved Princeton offense has appeared lethargic for years, and the numbers back up the eye test. In the last five seasons, Georgetown has never had a top-50 offense measured by efficiency and in three of those seasons has been ranked worse than 100th.

Ultimately, the most successful college basketball coaches create a whole that is greater than the sum of a team’s parts. This is where Thompson has failed: the parts he recruits are increasingly inadequate or fail to develop, and the whole is glaringly insufficient compared to its peers.

Undoubtedly, the players bear responsibility for their efforts, but it is a larger reflection on Thompson. On Thompson’s watch, Georgetown has a history of underestimating and underperforming against opponents it should easily handle.

We can tolerate a losing season or two, but how the program responds in this moment is crucial. Letting our angst continue without acknowledging the problem will inevitably breed apathy.

Indecision risks further apathy. The time to make a change is now, and the school has only one choice: Fire JTIII.

Michael Ippolito and Chris Balthazard are both seniors in the College.

The original article included quotes from Hoya Blue that were intended for another article.