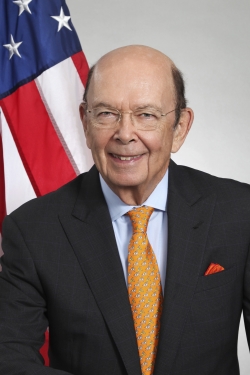 Andrew Wallender is a staff writer for The Hoya.

“What’s sad is for business leaders to give up an opportunity to influence policy over some singular issue with which they disagree,” Ross said. “I don’t think that’s very well considered.”

Following violence at a white nationalist rally in Charlottesville, Va., during which one woman was killed Aug. 12, Trump said “bigotry and violence on many sides” were to blame. The president’s response led to more than seven business leaders withdrawing from White House advisory councils on business and manufacturing, leading to the Strategy and Policy Forum and the American Manufacturing Council both being disbanded Aug. 16.

Ross discussed the significance of these remarks, as well as the state of American trade deals, in an interview with Washington Post national political correspondent James Hohmann at a Post-sponsored event.

Ross singled out Elon Musk, CEO of automobile manufacturing company Tesla, in saying that many business leaders were not supporters of Trump during the election and suggested political motives were a factor in business leaders’ abandoning the president’s advisory councils.

The commerce secretary also reaffirmed the Trump administration’s intention to wrap up North American Free Trade Agreement negotiations by the end of the year, threatening to pull out of the trilateral agreement with Mexico and Canada if a new agreement is not achieved. The Trump administration has indicated reducing the trade deficit with Canada and Mexico and increased labor regulations as priorities, according to the U.S. trade representative.

“The president has made clear that, if negotiations don’t work, he’ll pull out,” Ross said, repeating Trump’s rhetoric that the agreement has negatively affected the United States. “So that shouldn’t be a shock to anyone. And really, that’s the right thing. We need fixes to this deal. It has not worked the way that it was intended to.”

Ross pointed to the United States’ cumulative $1 trillion trade deficit with Mexico since NAFTA’s enactment as evidence that the benefits of the trade agreement were not fairly distributed. Mexico has also failed to raise its minimum wage in years, which is evidence of loose labor standards in Mexico, Ross said.

The pace of the negotiations is unprecedented, according to Ross. Negotiations are taking place in 5-day spurts every two weeks. The first two rounds were held in Washington, D.C. and Mexico City last month, with the third round set to take place in Ottawa, from Sept. 23 to Sept. 27.

Despite the quick pace, it remains too early in the negotiating process to tell whether Mexico and Canada are negotiating in good faith with the United States, Ross said.

Ross also used the event to call on Congress to pass tax reform, calling attention to the 6 billion hours per year that are “wasted” by Americans preparing tax forms, according to a 2013 report from the Taxpayer Advocate Service.

“I hope that there’s real reform but that becomes largely in the hands of the Congress, and that’s part of the reason the president wanted to accelerate things,” Ross said. “These are complicated tasks, and they’ll be made even more complicated by some of your neighbors here on K Street, as they lobby and lobby and lobby for their favorite little wrinkle.”

Trump traveled to North Dakota Sept. 6, where he called for a simplified tax code, a lower corporate tax and a tax cut for the middle class. The president said Sept. 10 during a cabinet meeting at Camp David that, because of Hurricane Irma, he would ask for a speed-up of tax reform.

Ross expressed hope that tax reform can be a bipartisan congressional effort. It would be unattractive for Democrats to maintain support for a complicated tax system, Ross said.