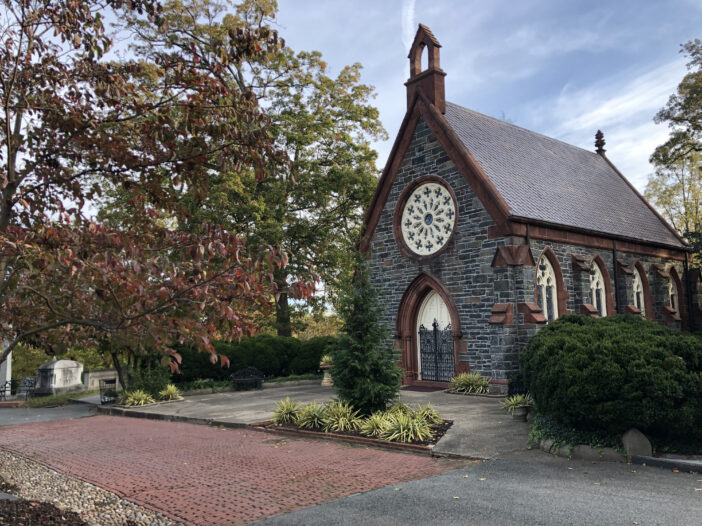 This week, our interview on “The Community Corner” takes place well beyond a Zoom screen. In fact, we made our way to Oak Hill Cemetery, a historic graveyard located in the Georgetown neighborhood that was founded in 1849, for a walking tour.

From America’s father of viticulture to the ghost of Willie Lincoln, Andrea Seiger, a Washington, D.C.-based author and tour guide, spoke with The Hoya about the people buried in this cemetery and the stories their lives tell.

Listen in to hear why Seiger thinks Oak Hill is a “best address” of Washington, D.C., and how cemeteries are an underappreciated kind of living museum about a place and the people there.

GB: I am in Oak Hill Cemetery right now, walking up a pretty large hill, as I wait for my tour and subject of the show to get here.

GB: From The Hoya, I’m Grace Buono (COL ’23) and this is “The Community Corner,” a weekly show about the lives of Hoyas near and far from the Hilltop. Today, our story takes place not on a Zoom screen but in Oak Hill Cemetery, a 22-acre cemetery that was first incorporated by an act of Congress in March 1849. Oak Hill Cemetery was founded by William Corcoran, a banker and founder of the Riggs National Bank, which is now known as PNC Bank. And yes, Riggs as in the Francis Riggs library here on campus. You might be wondering why you’ve suddenly found yourself listening to a podcast about a cemetery tucked away in the Georgetown neighborhood, but that’s because Oak Hill is a story in itself. And to help me tell that story, I went to Oak Hill on a brisk November morning to meet Andrea Seiger.

AS: My name is Andrea Seiger and I am a guidebook author. I am the author of “111 Places in Washington You Must Not Miss.”

GB: Seiger started giving tours at Oak Hill in partnership with the Washington, D.C. bookstore Politics and Prose after the 2017 book “Lincoln in the Bardo” was published by George Saunders. The book takes place in 1862 when President Abrabam Lincoln’s son, Willie, died. Though this book is the fictional tale of Willie’s rather supernatural experiences in a kind of purgatory state, the 11-year-old boy was in fact laid to rest in a mausoleum right here in Oak Hill before his body could be taken back to Illinois. But we’ll get back to that.

AS: This cemetery is a best address. You know, we think about best addresses being a neighborhood or a fabulous apartment building where the who’s who lived or do live. Well, this is a who’s who of who has lived and who doesn’t live any longer, as far we know. People who are buried here or urned here or haunting the place or all of the above, maybe.

GB: With that, Seiger and I started walking. As you heard right at the beginning, Oak Hill Cemetery is, above all, hilly. There are graves nestled in row after row on these hills, many of which face a downwards slope leading to what is now Rock Creek Parkway. Other than a team of people scattered around the cemetery gardening and doing renovation work, it felt like Seiger and I were the only two people walking through the cemetery on this morning.

AS: So one of the graves that I would like to introduce you to, this one — this story is one of my favorites. This is John Adlum. John Adlum was a revolutionary war soldier, a decorated one. But what makes him a really fascinating story is that he is considered the father of American viticulture.

GB: And yes, by that she means Adlum cultivated grapes for wine.

AS: This man went on, you know, his first round wasn’t so great. The second round of wine, he sent some to Thomas Jefferson, who had a renowned palate and, you know, he was a farmer and an innovator himself, and Jefferson actually wrote fairly — a very nice response. They got to be penpals. They were friends for 15 years until Adlum died.

GB: Adlum, by the way, was born in 1759 and died in 1836. You’ll remember that Oak Hill Cemetery was not actually founded until 1862, but Adlum’s body was exhumed and moved into Oak Hill. The cemetery was, even right upon its launch, the place to be, especially for the kind of American genteel families of Washington, D.C., at the time.

AS: I think partially because of where it’s located, you know, it’s a beautiful view looking down on Rock Creek Park and on Rock Creek, which is right at the bottom of the hill. If you were to go rolling down there you’d end up in the water. And it was in Georgetown, which was not yet part of the District of Columbia. So Georgetown didn’t get incorporated into the city of Washington until 1791. So Georgetown was kind of where the elite lived and circulated. This was where some of the wealthiest people lived.

GB: As we walked away from Adlum’s grave, Seiger told me how she believes there are somewhere around 20,000 people buried here in Oak Hill.

AS: As you look around on the lower levels more and a little bit further back closer to the east side, you’ll see the giant mausoleums, and there are numbers of people in those family mausoleums.

GB: Next, Seiger and I found ourselves walking down a rather steep set of winding stone stairs to what felt like the very edge of the cemetery. And all of a sudden we just stopped.

AS: This is Elizabeth Washington. She was 27 years old. She was the first burial here in the cemetery. There’s not a lot. I haven’t been able to find a lot about her. Yes, she is descended from those Washingtons.

GB: As you can probably hear in the background, Washington’s once serene painting haven is a little different these days. Though she once would sit at the very site of her grave looking out at the babbling Rock Creek, these days, just beyond the treeline, is a highway.

AS: And the reason she is buried in this spot, well first of all she was the first person buried here in 1849. But the reason she was buried here in this particular place was that this was her favorite spot to come and draw and do needlework. So she would come here and sit on the lawn and sit on this beautiful hillside and look down on Rock Creek and paint and draw and do needlework.

GB: Seiger is a pure conseguir of history. She sees stories all around her from the placards on buildings to the names on graves. You just have to stop and read them. This is what she told me as we made our way from Washinton’s grave down a narrow pathway. On our left was a row of mausoleums, built right into the steep hill. To our right was a dropoff that, as Seiger told me, is where we would tumble into Rock Creek if we fell over.

AS: You know here in Georgetown, for those of you who live in Georgetown, even if it’s only for the four years of your college career, there’s so much to do here. And if you don’t feel like going to a bar or a bakery, there are plenty of lovely places to enjoy a walk and, you know, stop and read historical markers.

GB: Seiger, who has a story for what feels like every other grave in this cemetery, sees this place as more than just a list of names carved into rock. For her, beyond just a nice place to walk, cemeteries are an underappreciated source of stories to be kept alive.

AS: So this is the William Thomas Carol family mausoleum. And on February 20, 1862, when Willie Lincoln, who was the 11-year-old son of President Lincoln, died of typhoid fever, William Carol, who was the clerk of the Supreme Court, he actually served on that position for 34 years, he was the longest-serving Supreme Court clerk in American history today. He offered up his family mausoleum to place Willie until the family was able to get back to Illinois and bury him properly in the family plot in Springfield, Illinois. Which eventually happened after the president was assassinated — they eventually took the president and Willie back to Springfield, which is where they are now. The president, and this is true, it’s documented, that the president would come here in the dark of night. And he would get on his horse at the White House and apparently he was way too big for his horse and he would show up at the gate and the gatekeeper would hand him the key to the mausoleum and he would come in here and just hold his dead son. Which is really heartbreaking.

GB: For all the talk of graves, ghosts and spirits, Seiger wasn’t always a fan of cemeteries.

AS: I used to be creeped out by cemeteries, and I don’t know if I’d want to live by one, but I’ve learned over the years that cemeteries are great places for stories. Cemeteries tell you history of where you are and the people who came before us. And even if you’re not interested, if you have that — if your mantra is “Ugh, I don’t care about history,” which, P.S., you should, they’re just beautiful pieces to walk. They’re beautiful parks. If you see a name that sounds intriguing or familiar, look them up.

GB: For those now intrigued at taking a visit to Oak Hill Cemetery, Seiger has a message: Keep your eyes open and who knows what you’ll find. Her stories alone are a testament to that advice.

GB: These are only a few of the stories Seiger told me on my visit to Oak Hill Cemetery. And she’s just one tour guide. Every guide, she said, curates their own theme. For Seiger, her tours are about “Lincoln in the Bardo.” For others, it’s notable women, or journalists, or members of Congress. With 20,000 graves, there are endless stories to be told.

AS: But there’s, you know, this place that if you look around and you’re a photographer, this is a great place to come. There’s a resident six-point buck who likes to make an appearance here. And if you see him, he’s gigantic. He scared me to death. I saw him one day, I thought he was a headstone. And then his ear wiggled and I almost had a heart attack.

GB: This podcast was recorded, edited and produced by Grace Buono. Many special thanks to Andrea Seiger for taking the time to share her stories of Oak Hill Cemetery with me. Before I sign off here, a special announcement. After Thanksgiving, I’m thrilled to announce that two Multimedia staffers, Mia Rasmany (COL ’24) and Valerie Blinder (COL ’24) will be your next senior Multimedia editors. So, for all you dedicated listeners out there, if you hear another host on “The Community Corner,” that’s why. That’s all I have for today, tune in for more soon.