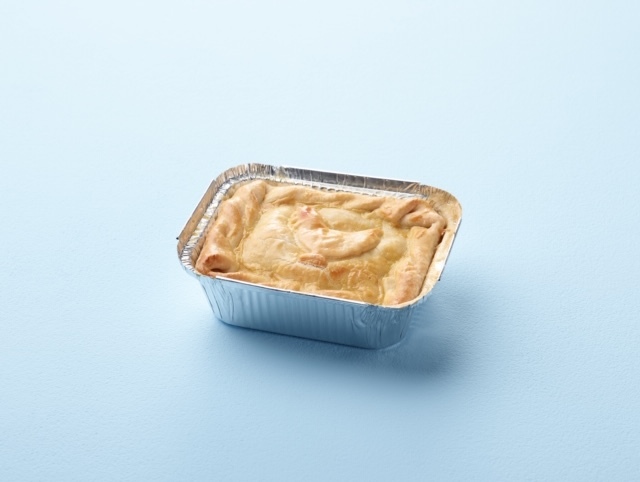 Last year, Jennifer Crovato, chef and owner of Georgetown’s 1310 Kitchen and Bar, cooked so many chicken pot pies she lost her fingerprints. Her quest to prepare 500 take-and-bake pies were for the first annual Pot Pie-athon, an event Crovato launched during the COVID-19 pandemic as an additional source of revenue for her restaurant as well as a fundraiser opportunity with Georgetown Main Street.

Now, Crovato is at it again, this time with help, as the Pot Pie-athon returns to Georgetown. Running between Oct. 25 and Nov. 7, the event offers an array of take-and-bake items customers can cook up all winter long, including in a toaster oven, according to Crovato.

This week on “The Community Corner,” The Hoya sat down with Crovato to learn more about her recipe secrets and why these pot pies saved her restaurant.

GB: From The Hoya, I’m Grace Buono (COL ’23), this is “The Community Corner,” a weekly show about the lives and stories of Hoyas near and far from the Hilltop. Today I have a story that might make you, well, hungry. So if you haven’t already had lunch, you might reconsider. Or maybe this will inspire your next dinner, who knows. Either way, I think this episode is kind of an unusual one because it’s about, well, chicken pot pies. Yes, that’s right — I’m here to share a story with you about the perfect fall dish, the chicken pot pie.

GB: This week, I had the chance to call Jennifer Crovato, chef and owner of 1310 Kitchen and Bar on Georgetown’s Wisconsin Avenue as well as author of the cookbook “Olive Oil, Sea Salt & Pepper.” Crovato, in addition to running her restaurant, is currently in the midst of her second annual Pot Pie-athon. She launched the event last year during the COVID-19 pandemic when 1310 Kitchen and Bar was closed to the public as a way for customers to continue their support for the restaurant. Crovato had originally begun baking pot pies during the pandemic as her way of tapping into a growing demand for easy, take-home meals.

JS: So I started with the chicken pot pies and selling them through the organic butcher McLean early on and starting in October I was selling them through 1310 Kitchen and Bar in Georgetown as well. And it was the only product I had at the time. Then there was such demand that I started making more options. The Pot Pie-athon allowed me to launch this in the neighborhood but also give back at the same time to Georgetown Main Street.

GB: Crovato’s Pot Pie-athon became more than just a source of revenue for her restaurant during the pandemic. She also pledged that 50% of proceeds from the pot pie sales over the course of a two-week period would go toward Georgetown Main Street, a local nonprofit organization that supports the business community in the Georgetown neighborhood. This year, Crovato’s Pot Pie-athon, taking place between Oct. 25 and Nov. 7, has grown to include other take-and-bake items like eggplant parmesan, lamb ragu and enchiladas.

JS: And so it was kind of a win-win. And all of the people who supported the Pot Pie-athon continued to support me throughout the rest of the year and purchased on a weekly basis, which basically got me through the pandemic.

GB: Crovato took over 1310 Kitchen and Bar in 2018, reopening its doors in 2019, and, in addition to it being her first restaurant, she envisioned the space as Georgetown’s next neighborhood spot.

JS: I love that its location is like not down by the waterfront but is also not too far up with the residents. It’s kind of in the middle. I love the fact that it’s sort of, it can be a neighborhood spot also for Georgetown students, it definitely feels that way.

GB: With 1310 under her wing and joining the community of Georgetown Main Street, Crovato felt welcomed into the neighborhood.

JS: I don’t know, I definitely feel part of the community being there.

GB: Before 1310 Kitchen and Bar, Crovato had spent the majority of her time cooking as a private chef. Cooking had long been a part of her life. Growing up in Silver Spring, Md., it was her way of making money to spend on travel or other expenses.

JS: I had very little interest in school, I didn’t do well in school, and so when I graduated going to college wasn’t really something that I even dreamed of.

GB: Though Crovoto thought school was out of the picture, her mother suggested something else: What about culinary school? And so Crovato soon found herself at the Culinary Institute of America in New York.

JS: I really excelled there, it was just something that came naturally to me. And so I found something that I was phenomenally good at but I could also make money at, so yeah. I just went from there.

GB: It makes sense that while at culinary school Crovato gravitated toward cooking more savory dishes, ones that didn’t require, as she put it, the patience other culinary fields demand.

JS: I’m definitely a savory person — I don’t have the patience to be a baker, unfortunately. I definitely respect all the bakers out there though.

GB: As Crovato’s time and training as a chef grew, so too did her style. Crovato tends to cook simple dishes that focus on the ingredients themselves rather than anything else. Her aim is to cook healthy food that enhances the ingredients within, rather than burying the taste in excess work or steps.

JS: I say that my cooking is really straightforward and more on the healthy side. It’s just like, I’d rather spend more time seeking out and finding the ingredients than actually cooking the food. I feel like if you start with a really amazing great product you don’t have to do much to make it taste great. And actually the less you do to it the better. I said for many years that if I ever write a cookbook it’s just going to be called “Olive Oil, Sea Salt & Pepper” and it’s going to be a method book. So the whole idea behind it was to help people learn how to cook with method-based cooking just to make it easier, encourage people to shop at farmers markets and cook, I guess shop, more the fresh area of the grocery stores rather than the aisles so that they can go home and prepare an easy, fresh meal.

GB: As for the chicken pot pies, Crovato has applied her own cooking styles to the classic dish. These pot pies, she says, are not like any old one you’ve had. But I can’t do the description justice; I’ll let her explain.

JS: So ours has spinach, shiitake mushrooms, carrots, peas, celery and we roast and pull the chickens, we don’t dice them. And then we take the bones from the chicken and we make the chicken stock and the dough is also handmade, we don’t use a puff pastry. So it’s half butter and flour and it is tricky to make because it has to be super cold when you make it, but it puffs up beautifully. But we don’t add any cornstarch, we don’t do any additives, there’s no potatoes or fillers, there’s no heavy cream, which are typically in other pot pies.

GB: So remember how I said that this episode might make you hungry? Go ahead and take a lunch break now if you need to, we won’t mind. But anyways. I was getting curious at this point, how many pot pies has Crovato had to make? Last year she cooked 500.

JS: I did it by myself, it almost broke me. But this year, thank goodness, I have help. And I also have other options, so it’s not just the one thing that we’re making but I do except that we’ll have to make at least 1000 units of all the different items, including chicken pot pies.

GB: Though restaurant reopenings since last fall have certainly increased, thus possibly decreasing the demand for take-and-bake items that customers had during the pandemic, Crovato still expects to see a strong interest in the Pot Pie-athon this year.

JS: We’re still getting a good amount of support, but I’d say not as much as last year just because people didn’t have as many options available. But we definitely have a great response.

GB: If for nothing else, though, Crovato is glad to have her staff at the restaurant supporting her on this pot pie journey.

JS: Yeah it was a lot tougher last year because I was not only making them, I was also the dishwasher, and had to order them, and had to do the online marketing and emails and print out all the order slips and pack the orders and I had to do everything. So the plus this year is I have a lot of help and it’s still a lot of work but it’s not nearly enough. I mean, I literally lost my fingerprint last year because I used it to go on my Mac and I couldn’t even login anymore because it was gone from washing the dishes. So this year I still have my fingers.

GB: Beyond just Crovato’s Pot Pie-athon event in partnership with Georgetown Main Street, she sees the event as a broader example how how restaurants can support themselves in the ever-changing business landscape that they now find themselves within, especially as the country still grapples with what a postpandemic world looks like.

JS: I’m just hoping, this is a great additional revenue stream to the restaurant as you and everyone know that restaurants have gone through a major change this last year and I think will continue to go through some changes in the years to come. And so having a separate revenue stream is really ideal and this is also something that can just sort of survive on its own, as its own business, which is wonderful. But we are hoping to bring them also to Georgetown University students as well.

GB: And yes, even Crovato heard all the stories about the dining hall here on campus this year. That’s why she hopes to begin offering take-and-bake items, including chicken pot pies, to students at a discounted price.

JS: And it does work in a toaster oven.

GB: I had one burning question left to ask Crovato: After cooking all these pot pies, can she still stand to eat them?

GB: This podcast was recorded, edited and produced by Grace Buono. Special thanks to Jennifer Crovato for taking the time out of her busy chicken-pot-pie-cooking schedule to speak with me. That’s all we have for now, tune in for more next week. And in the meantime, maybe you’ll even go celebrate this fall weather with a pot pie or two.