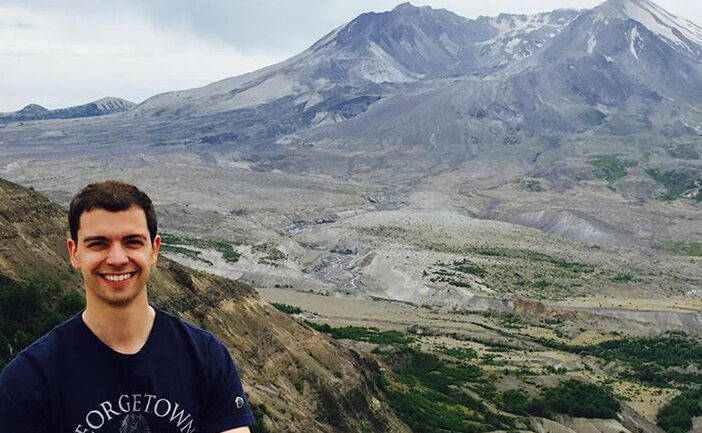 Dagomar Degroot, professor of environmental history at Georgetown University, has a message to students and adults alike: Our planet is not as doomed as we may think.

Today on “The Community Corner,” multimedia staffer Melanie Elliot (COL ’24) sits down with Degroot to unpack some of the popular myths that exist about the end of the world as it relates to climate change. Why is it that we tend to catastrophize our future? Why might that be dangerous?

From the importance of political engagement to highlighting the role of socioeconomic class in climate change reform, tune in to hear Degroot share his thoughts about why doomism exists and what we can do to stop it.

DD: So doomism is the idea that we are all doomed to extinction because of climate change.

ME: The world is ending. Or, at least, that’s what some believe.

GB: From The Hoya, I’m Grace Buono (COL ’23), this is The Community Corner, a weekly show about the lives and stories of Hoyas near and far from the Hilltop. This week, multimedia staffer Melanie Elliot (COL ’24) is here to tell you about, well you heard it, doomism. She spoke with Georgetown University professor of environmental history Dagomar Degroot for this story, following the publication of an article he wrote titled “Our planet is not doomed. That means we can, and must, act” in The Washington Post earlier this fall. But I’ll let Melanie take it from here.

ME: Climate change is easily one of the hottest topics right now. From discussions of the causes of climate change to its potential future repercussions, people all over the world are becoming increasingly preoccupied by this increasingly pressing issue. Over time, however, it is worth noting the emergence of the “doomist” perspective on this issue. As discussed by Dagomar Degroot in his Washington Post article “Our planet is not doomed,” doomism is the negative belief that we are all doomed to extinction because of climate change. In speaking with Degroot, nonetheless, it became clear that this perspective of doomism is dangerous and far from what we need in discussing climate change.

DD: I believe it is important to be conscious of one’s individual contribution to climate change. But, that consciousness has to be kind of calibrated to one’s social-economic position and one’s means.

ME: Degroot’s piece has a strong focus on the human ecological footprint and the role we as human beings play in climate change. Thus, Degroot also tackles the major question of how Georgetown students can minimize their own ecological footprints in their day to day lives.

DD: If you’re poor and from a poor family, your environmental footprint is going to be different than what it would be if you are rich for the most part. And your ability to change that environmental footprint is going to be different as well. So you know, it’s kind of up to you to figure out well, what can I eliminate from my life? Or what activities can I change in my life that will allow me to minimize my carbon footprint. Whether it’s, you know, I’m going to eat less red meat, which is good for you anyway, or I’m going to fly less, which maybe gives you more time to do other things or take the train, which is actually better than taking the plane — it’s more fun if you ask me. Those sorts of things, right? But, what’s much more important than that is something that might come more naturally to Georgetown students, which is becoming politically engaged. Right, this goes back to the systemic change, which I view as being significantly more important, right? We could all try and do the right thing in our lives. It’s not going to make a difference unless the government starts implementing policies that reduce carbon emissions.

ME: Many are feeling very hopeless about climate change now. While my assertion earlier that the world is ending was a slight exaggeration, by way of the concept of doomism, Degroot brings to light the many people who actually see truth in impending doom.

DD: So, doomism is the idea that we are all doomed to extinction because of climate change. Most simply, it is that. And I’ve seen it quite often in my classes. Of course I teach about climate change, mostly past climate change. But, it’s the idea that this crisis is out of control, that warming is accelerating, that our greenhouse gas emissions, which are driving the warming up, that they’re going up dramatically, that they will continue to soar in coming decades. There’s no stopping that. And that as emissions rise, and the temperature of the Earth rises and weather gets more extreme, the basic services provided by our societies will break down. For example, our ability to provide enough food, right, to grow enough food. It’s going to be impossible to do that if it gets too hot or if it gets too dry. Right? Food prices will soar, societies, governments will become unstable, and with that, of course, the whole sort of structure of modern life will fall apart. And the end result will be war and famine and ultimately, yeah, the extinction of humanity.

CNN: Meantime, a UN report suggests the world is heading in the wrong direction as many countries look to increase fossil fuel production in the coming years.

DD: It is becoming, I think, increasingly popular. It’s all over, you know, New York Magazine, The New Yorker, The New York Times, a lot of the most read publications. A lot of the most read books on climate change I would say subscribe to doomism. And, I think it drives a tremendous amount of anxiety about the future. And, you know, there’s every reason to be afraid about the future. Let’s be honest here, climate change is a scary problem, but as I argue in my piece doomism is not justified. It’s also, in my view, dangerous.

ME: Degroot also expands upon what exactly makes doomism such a baseless and, more importantly, dangerous viewpoint.

DD: First, in terms of emissions. Emissions are not soaring right now. They’ve gone up by about 1% a year, for the last 10 years or so, which is not good, obviously, right? We need these emissions to decline, this is a serious problem. But, they are also not primed to soar. They’re not primed to expand dramatically in the coming decades. And part of the reason for that is the rapid decline of coal. Coal is one of the worst things you can burn, right. So, you want less coal. Coal use is declining, and even in developing countries, such as India, such as China, there’s a movement away from coal power plants, in favor of renewable energy. It’s not going fast enough, there are still new coal power plants being built. But, there is — those trends have looked very promising. In addition to that, the price of renewable power solar wind is cratering much faster than people had anticipated several years ago. And that’s also driving a projected reduction in the amount of emissions that we’ll be releasing into the atmosphere. So, whereas a few years ago the state of the Earth seemed to suggest that our emissions would in fact rise dramatically over the course of the coming century, now, it seems like they will at least plateau. Maybe they have already plateaued in recent years. So, that picture looks a lot different than doomists would assume. Relatedly, of course, and this is very closely tied together, the amount of warming you will likely have by the end of the century looks like it will be a lot lower than we might have feared a few years ago. Another pillar for doomists and the kind of doomist platform is the idea that societies have always been extremely vulnerable to a shifting climate. Right, so, what we’re finding actually, and this is, what my work is directly relevant to my research, we’re finding that actually a lot of populations were able to cope with these changes, either by adapting or because they were already resilient in the first place. So, that kind of collapse is not the typical response of societies when faced with climate change. So, there’s a very well known climate scientist and a colleague, her name is Kate Marvel. And, she’s memorably said, you know, I don’t think the human race is going to go extinct because of climate change. But, we should aim for something a little bit better than not going extinct. That’s how I see it too.

ME: At the end of the day, Degroot urges that our world is far from doomed. So, instead of resigning yourself to the inevitable destruction of the world, use your voice. Urge government action.

DD:  Right? This has got to be a huge problem that we work on. But, if we simply assume that we are going to go extinct anyway, I think that deprives us of the motivation that we require, in order to work on the problem, right? If you just think that the cause is already lost, why are you going to bother fixing anything? And that’s part of the reason that I wrote this column. It’s part of the reason that I think that doomism is dangerous.

GB: This podcast was recorded by Melanie Elliot and produced by Grace Buono. Special thanks to Dagomar Degroot for taking the time to speak with The Hoya. That’s all we have for today, tune in for more next week.