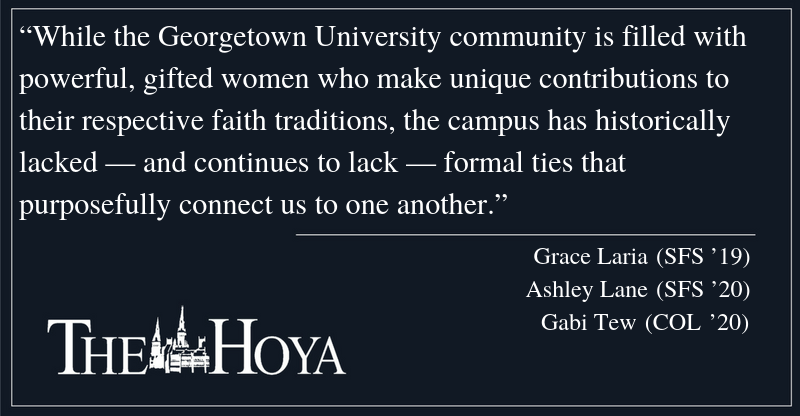 Interfaith dialogue constructed and facilitated specifically by women is needed on our campus, in our country and in our world.

In 2016, Georgetown University Campus Ministry student workers Khadija Mohamud (SFS ’17), Ruth Henry (COL ’19), Paige Harouse (COL ’19) and Piyusha Mittal (SFS ’18) recognized a crucial element missing from existing Campus Ministry programs, student groups and initiatives. Working together over the course of the school year, they realized that no space on campus existed to facilitate what they had found in one another: interfaith dialogue, solidarity and friendship among women across all faith traditions.

While the Georgetown community is filled with powerful, gifted women who make unique contributions to their respective faith traditions, the campus has historically lacked — and continues to lack — formal ties that purposefully connect us to one another. Mohamud, Henry, Harouse and Mittal recognized the need for and value in creating an interfaith space specifically for women of different faith backgrounds to discuss and reflect on their experiences.

Sexism manifests all too often in faith spaces, stripping women of the religious authority necessary to make their voices heard and respected on issues ranging from community life to theological doctrine. Dialogue that empowers women must start with community — it starts with friendship, trust, encouragement and support, and so Mohamud, Henry, Harouse and Mittal created Women in Faith.

WiF, a student-led, student-driven initiative, began in November 2016 as a daylong retreat at the Calcagnini Contemplative Center that crossed religious and denominational ties, bringing together 30 women from a range of faith traditions and backgrounds. The following year, WiF expanded to include on-campus programming in addition to the now-overnight retreat, aiming to recreate the space for discussion and reflection that they had found at the CCC back on campus and to cultivate a lasting community on the Hilltop. Now in its third year, WiF has expanded to include a board of nine women and aims to become both an established presence on campus and a trusted resource for the Georgetown faith community through thoughtful and engaging programming.

We’ve chosen to focus this year’s programming and reflection on the theme of power, legitimacy and authority. We’ll consider topics such as the framing of female leadership in faith communities in which women are not ordained, the effect of periods on women’s participation in religious spaces, and the roles — formal and informal — women-only groups play in the lives and communities of women of faith. WiF isn’t one set of beliefs or a cohesive group of equally religious students, but rather a collective of women who seek the answers to these difficult questions, to explore together what we haven’t been given the opportunity to explore before.

Georgetown is blessed with a vibrant religious community that has consistently called upon its diverse members to be people for others. It’s now time for these same communities to honor and uplift the contributions made by our women, both students and staff, by creating a new space for reflection and friendship that empowers them to bravely share, deepen and question their relationship with faith and each other.