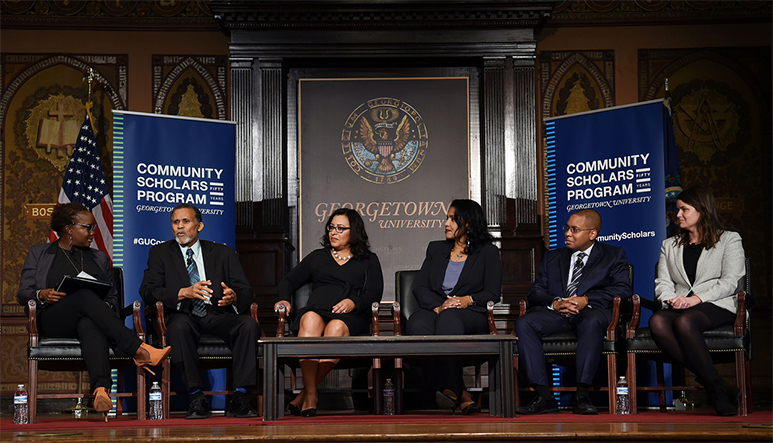 Since the Community Scholars Program was first proposed in 1964, it has grown from a small, faculty-funded program supporting five local students to a large institutional presence serving at least 50 new students from across the United States each year.

The program is celebrating 50 years since its official creation in 1968 this month, culminating in alumni reuniting Oct. 5.

CSP students take two courses in the summer and attend orientation workshops to build connections with other students and professors, according to CSP Senior Academic Advisor Elizabeth Velez.

“In terms of Georgetown’s vision, [CSP] is working with the whole student,” Velez said. “It’s not just academic — it’s social, cultural. In the summer, they get to know their deans, their financial aid officers. To know how to navigate the system is part of what we’re doing in the program.”

The attention paid to students’ lives outside of academics may just be paying dividends in students’ success in the classroom: CSP has a 91 percent graduation rate, 32 percentage points higher than the national graduation rate, according to a university news release.

Both a participant in CSP and a former residential assistant for the program, Omaris Caceres (NHS ’20) feels like the program provides an intentionality often missed in higher education.

“Georgetown is recognizing that most students come to campus with a toolbox full of tools that they can use,” Caceres said. “That includes how to do office hours, how to take a test, how to interact with professors — tools that people usually have coming into college. Georgetown is recognizing that scholars who are usually first generation, come from low income backgrounds, are coming in with an empty toolbox, and Community Scholars is the opportunity to fill it because we haven’t really had the chance to collect them.”

The 50th anniversary celebration featured a day full of panel talks on the program’s legacy and a reception, giving previous alumni a chance to reconnect with each other, CSP Director Devita Bishundat said.

“We brought together alums through the years, as well as current students, folks who have taught in the program, to really pay homage to the folks that laid the ground work for this program,” Bishundat said. “Being able to honor that when this program started, it was because of faculty and staff and students who gave money out of their pocket.”

The first year of the program granted $45,000 in scholarships to five black students from the District, according to a 1968 university news release. The funds were donated by 90 lay and 40 Jesuit professors in a drive organized by English Professor Raymond Reno. At the time, only 40 black students were enrolled at the university.

The deep connections and history of CSP allow students the ability to maintain close relationships with other students and mentors throughout their time at Georgetown and beyond, Caceres said.

“The backbone of the program is the ability to have these close mentor-mentee relationships with so many different people,” Caceres said. “I actually met graduates who are succeeding and making money, and proved to me that people haven’t been lying to me this whole time. They had the same tools and access to things that I do, so I’ll be able to reach that too.”

The program itself has shifted and grown significantly from its inception, according to Velez.

“In 1968, Georgetown reached out to the D.C. Public School community — most of those students which were African American,” Velez said. “Since then, the program has evolved. We have 75 students that come from all over the country, they are almost always first-generation students.”

The first CSP cohort was six local black students, as Georgetown sought to “address the extreme disparities experienced by black Americans living in Washington, D.C.,” according to Georgetown’s blog.

In her three years as director, Bishundat has seen the program’s cohorts increase from 50 to 75, with 100 percent of the last cohort being first-generation students.

As a first-generation college student and low-income woman of color herself, Bishundat recognizes the value of investing in a strength-based approach.

“Often times, communities of color, first gen students, low income students, really any marginalized community, are always talked about from a deficit approach – that they’re lacking,” Bishundat said. “For me, it’s really important that we flip the script to take a strength based approach to this work, and really focus on the gifts, the talents, the experiences, the resilience that our students bring to this campus.”

The effect CSP leaves on its community extends past its scholars, but also to the faculty and staff as well.

“If in my twenties somebody could’ve said to me, ‘what would be a good job in the whole world that you would like the best,’ I wouldn’t have been able to articulate it,” Velez said. “This job is amazing working with the students. I’ve been to their weddings, I’ve been to their grandparents’ funerals, some of them are very close friends. They come to Georgetown knowing that their parents haven’t been to college — to watch them do the work and be motivated in this desire to give back to their communities, to their families, is an incredible privilege.”