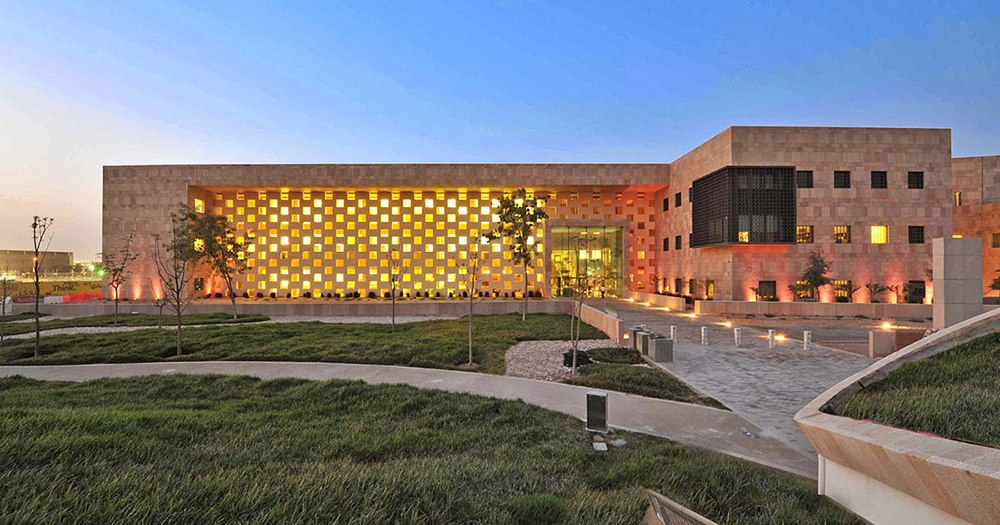 “What we’ve seen at Georgetown-Qatar is the norm erosion of our ethical standards.”

So wrote Ian Almond — a world literature professor at Georgetown University’s campus in Doha, Qatar, who is currently on leave — in a November 2017 letter sent to Provost Robert Groves concerning the treatment of migrant workers at the Qatari campus. Almond published the letter on his Facebook page in February after receiving no reply.

A few days after publicly posting his letter, Almond received a response from Groves, according to Almond’s Facebook page. Groves’ reply included a link to a February letter to the editor published in the Georgetown Voice discussing steps the university has taken to protect workers at its Qatari campus.

Almond, in his letter, claimed workers were paid between 1000 and 1700 riyals per month — the equivalent of $250 to $400 — and forced to sleep in cramped accommodations “with four or sometimes eight to a room.” The average wages of migrant construction workers in Qatar can be as low as $160 per month, according to Vox.

Almond said he found these conditions antithetical to the university’s values.

“This situation is intolerable,” Almond wrote in the letter. “It mocks and undermines everything we do and claim to be at Georgetown.”

Georgetown, which opened its Qatari campus in 2005, is one of six U.S. universities that have branches in a 14-square-kilometer community development in Doha known as “Education City.” The Education City initiative is supported by the Qatar Foundation, an organization for Qatari development founded and governed by the Qatari royal family.

Qatar has long been dogged by accusations of mistreatment and exploitation of its migrant workers, who are predominantly from Asian countries such as India, Nepal and the Philippines and make up 90 percent of the Qatari population, according to The New York Times. Such migrant workers are particularly vital as the country prepares to host the 2022 FIFA World Cup by building stadiums and developing infrastructure.

Workers involved in the World Cup construction reported having to pay recruitment fees, working excessive hours, having their passports confiscated and fearing reprisal for filing health and safety concerns, according to a 2017 report by Amnesty International.

Unlike workers at Georgetown’s Washington, D.C. locations, the university’s Qatari employees are not covered by the university’s Just Employment Policy, which requires the university to provide fair and competitive compensation packages to full-time employees and assures their right to a safe, harassment-free work environment.

Introduced in 2005 after student protests, including a nine-day hunger strike, the Just Employment Policy currently provides a minimum total compensation of $16.77 per hour.

Instead, migrant workers are held to the standards established by the Qatar Foundation in 2013, which stipulate all migrant workers employed by the foundation, its contractors and subcontracted firms must receive training on their rights under Qatari law in their own languages.

Workers are also legally protected from being charged recruitment fees to obtain work and from having their passports confiscated by employers, under these standards.

For migrant workers at its Qatari campus, Georgetown adheres to these mandatory standards of the Qatar Foundation and holds its contractors to these standards as well.

However, the Qatar Foundation’s mandatory standards are not always upheld for migrant workers in the country, according to Gulf researcher Kristina Bogos (GRD ’17).

“On paper, guidelines may look good,” Bogos said in an interview with The Hoya. “But in practice, it’s an entirely different story.”

Bogos attributes the lack of enforcement to the asymmetric power balance created by a sponsorship system known as kafala, which tethers the visas and residency permits of all guest workers in Qatar to their employers.

Under this system, sponsors maintain the power to “confiscate passports, withhold or delay the payment of … wages, among other forms of ill treatment, with virtual ease,” Bogos added.

Concerns about the treatment of migrant workers at Georgetown’s Qatari campus were raised in a January editorial in The Hoya, “Extend Rights to Qatar.” Since the article’s publication, the university has announced its commitment to the 122 migrant workers contracted at the Qatari campus and publicly disclosed the creation of a Qatar Foundation-Georgetown University Joint Task Force on Worker Welfare, formed in January 2017.

Since its inception last year, the task force has worked to develop recommendations, including a greater emphasis on migrant worker welfare plans, steps to combat unethical recruitment practices such as recruitment fees and easier mechanisms for filing grievances, according to a university spokesperson.

In a February letter to the editor in The Hoya responding to the editorial, Groves cited the creation of the task force as an example of strides the university is making toward improving conditions for migrant workers. He also highlighted the presence of two Georgetown employees in Qatar charged with vetting contractors’ worker welfare plans at the Qatari campus and overseeing their compliance with the mandatory standards.

“We understand Georgetown’s responsibility to promote migrant welfare in Qatar,” Groves wrote. “We care deeply about this work, recognize the challenges ahead and are committed to continuing to improve the conditions for migrant workers on our own campus and throughout the region.”

The university has also established a process to hear and address the grievances of employees at the Qatari campus. In the last year, 23 of the 26 complaints formally filed with the university were resolved in a timely fashion to the satisfaction of the employee, according to a university spokesperson.

The university administration in Qatar also commissioned a survey to collect information about workers’ conditions, employing professors, staff and students to help interview employees over a series of weeks. However, nearly two years after the project’s start, the results remain unpublished externally.

In one of several of his policy demands, Almond implored the provost to publish the “squashed” data from this survey, or at least make it available to “concerned faculty.”

Alisha Kamran (SFS-Q ’18), a student at Georgetown’s Qatari campus who helped conduct the interviews, attributes delayed publication to standard research practice. Because the interviews were discussion-based, she said, it would take considerable time to break that qualitative research down into quantitative statistics.

Kamran is the program director of the Hoya Empowerment and Learning Program, a student-run literacy program at the Qatari campus that tutors migrant workers in topics like English and financial literacy. In her role at HELP, Kamran has established close relationships with several of the service providers.

While she takes issue with their long hours and confined living conditions, she said she is impressed by Georgetown’s dedication to its contracted employees.

Kamran said that through HELP’s biweekly classes, university-led food drives and a dinner held at the start of each year for students and service providers, workers are made to feel part of the Georgetown community.

“The providers aren’t segregated from students; they are made to feel part of the community,” Kamran said. “After speaking to a lot of them, they actually really like working here, because they are treated very well within the building. I’m sure that’s not the case for other workers in other areas in the country.”

However, Almond, who frequently participated in HELP’s programming, argued the projects are not enough.

“With the greatest respect, I’m not talking about free glasses/free t-shirts/literacy classes/Christmas raffles/free food,” Almond wrote. “I participate in and contribute to all of these things, the people who run them are wonderful – but they are not permanent responses to the situation.”

Almond called for more substantive reforms, starting with a “one-off cash payment” of $1,000 to each service worker and potentially culminating in a “complete restructuring” of the university’s service worker agreement.

Bogos, too, called for systematic changes, claiming Georgetown should at minimum implement long-term solutions to ensure the rights of the workers are not violated.

“Georgetown should think about its role more broadly in Qatar as an institution of higher education that supposedly espouses the ideals of social justice … and ensure that the standards it sets for its workers at the D.C. campus match those at the Qatar campus,” Bogos said. “From what I know after being on the ground in 2016 and meeting with many workers at GU-Q, the institution is falling quite short.”

Such restructuring would entail negotiations with the Qatar Foundation and, as the organization sponsors a number of U.S. universities in the region, could trigger new agreements at other institutions.

Kamran said she appreciates Almond’s outspokenness and compassion for service workers at Georgetown, though she wonders how feasible the implementation of a restructuring plan would be.

“It’s just so complex. I’m not sure to what extent Georgetown has bargaining power with the foundation,” Kamran said. “It’s one of the most powerful bodies in Qatar.”

Still, Kamran said the university’s academic focus on human rights is a step in the right direction.

“We have a lot of students who do a lot of work on migrant workers,” Kamran said. “You’ll always see, whether it’s freshmen students or seniors, every batch, there’s always some sort of effort being put into studying the issue.”

But Kamran concedes there is work that remains to be done.

“Georgetown is great with vocalizing opinions,” Kamran said. “But I think there needs to be more effort put into actually materializing ideas.”