Gray-haired, 16-year-old singer Billie Eilish is full of paradoxes. Her voice is light, angelic and mature well beyond her years, but allusions to violence in her lyrics and more ominous production give her songs a darker, biting edge. Her stop at the Black Cat, a music venue in downtown Washington, D.C., on March 20 as part of her Wheres My Mind tour was no different, as Eilish effortlessly shifted between raving across the stage and slowing down for her most delicate songs.

An employee of the Black Cat said that in the 16 years he has worked at the venue he had never seen so many people arrive so early for an artist. The punctuality of the attendees is a testament to the devotion of Eilish’s fans, who have helped her go from a SoundCloud discovery to a major label artist who performed on “The Tonight Show with Jimmy Fallon” on March 22.

The crowd was overwhelmingly female and young, so much so that the tables at the far back of the venue were populated with parent chaperones, and the hysteria at the concert surrounding Eilish rivaled that for any boy band.

An eager audience was greeted by opener Reo Cragun and his hype man and DJ kIEroglyphics. Cragun, a rapper who incorporates elements of rhythm and blues, did a good job of keeping the crowd’s energy up while waiting for Eilish. Sometimes the distortion of his voice in songs was excessive, but his reflective, slow jam “inconsiderate” about a relationship gone wrong was a standout that allowed his vocals to shine.

However, the crowd was extremely antsy for Eilish after Cragun finished. The audience members started three separate “Billie” chants before the show finally began around 9:30 p.m. Her brother and keyboardist, Finneas O’Connell, and another bandmate first appeared with “BILLIE” printed on bandanas over their faces and distributed money with Eilish’s face on it to the audience using money guns. Eilish then finally emerged amidst the stage fog to deafening screams dressed in her signature outfit: a hoodie, beanie and gold chains. Her hip-hop inspired attire is an example of how Eilish subverts expectations. She made the most of the small stage with a white screen surrounded by round light bulbs that changed colors and flashed along to the music.

Eilish kicked off the show with the uptempo and delightfully twisted track “bellyache” from her EP “dont smile at me,” but she was barely audible over the roar of the crowd. She then moved into the softer, piano-backed ballads “idontwannabeyouanymore” and “watch,” which were flawless when her airy voice was able to rise above the singing of the audience. Her performance of “watch” blended the original with the more avant-garde “&burn” remix, during which she rapped the verse of Vince Staples, who appears on the studio version of the track.

After continuing with softer tracks “bored” and “six feet under,” she invited her brother, O’Connell, to perform one of his own songs, a sultry rock number, solo. As O’Connell wrote or co-wrote all of the songs on her EP and plays the keyboard for her live performances, fans were familiar with him and eager to hear him sing.

After his performance, Eilish came back out, ukulele in hand, and fans knowingly cheered in anticipation. First, she launched into a stunning, stripped-down cover of Drake’s “Hotline Bling,” which perfectly showcased the purity of her falsetto and was a highlight of the night, before segueing into the expected “party favor.” 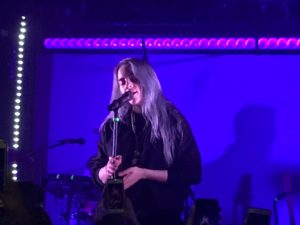 When Eilish talked to the audience in between songs, she appeared as a goofy, self-deprecating teenager who showed a lot of love to her fans, telling the audience: “I want to thank you guys for existing.”

When it came time for her to perform an unreleased track she hinted at the crowd to put away the phones that had been a near constant presence in the air, saying “if you just look up and look at me,” prompting everyone to be present and savor the soft ballad that sometimes rose only above a whisper. “ocean eyes,” the delicate and hypnotic song that launched her career and was just certified Gold in the U.S., selling over 500,000 units, ended with a sweet a capella singalong, and after it concluded Eilish exclaimed: “You guys hit a spot in my heart, f–k!,” one of many expletives throughout the show.

After bringing back the energy with “my boy,” she left the fans shouting for the encore before reappearing to shush the crowd and sing “hostage,” arguably the most delicate and haunting ballad off the EP and another standout of the show. She noted that “this is one of the best crowds I’ve ever had” and asked the crowd to “jump like a motherf—ing kangaroo” for the last song, “COPYCAT.” The audience enthusiastically obliged and when the concert was over Eilish happily collapsed into the arms of the crowd, a symbol of her close connection with her fans and of a job well done.