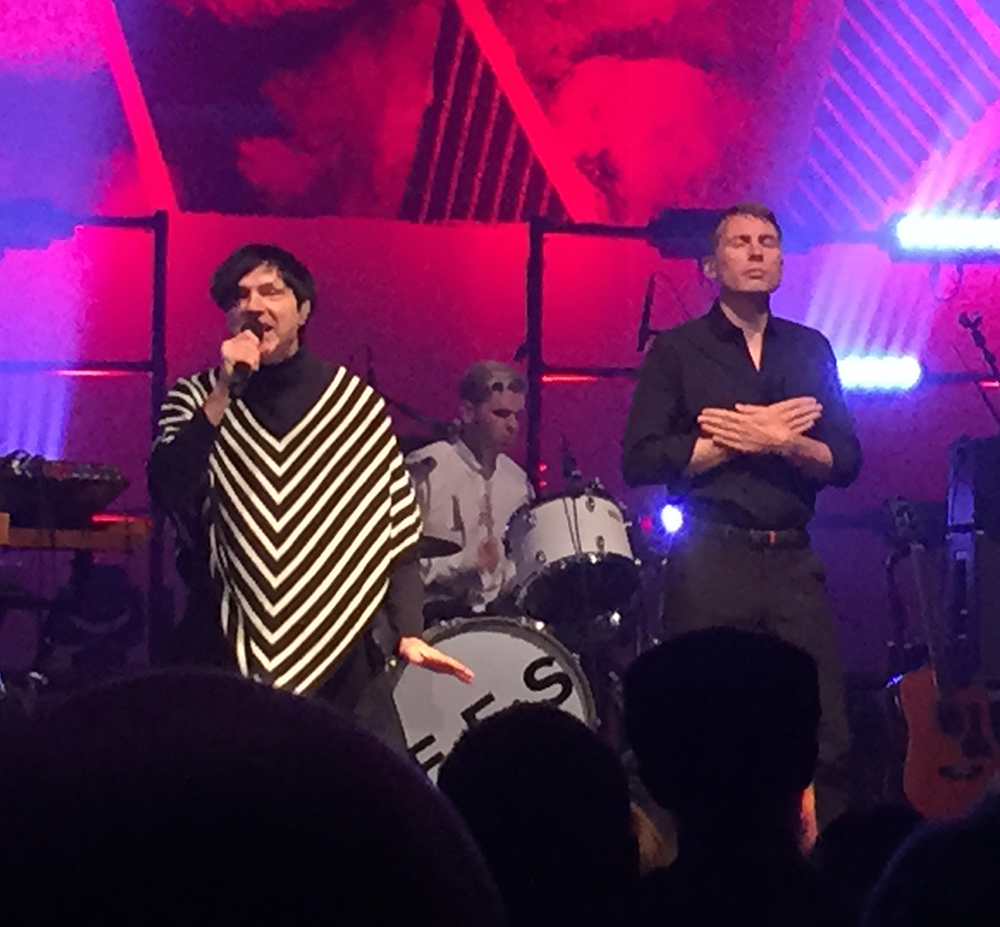 A recipe: a theater full of bolted seats, a single small $9 drink, six performers twice and thrice the average college age, a decade-long love for four of the performers that reached its potency several years ago and extreme trepidation at missing the bulk of The Hoya’s production night. The final product: much greater than the sum of its somewhat dodgy ingredients.

On Monday night, the Lincoln Theatre played host to the fourth stop in the North American tour of FFS, a rock amalgam of Scottish rock band Franz Ferdinand and Los Angeles rock band Sparks. The supergroup — touring on its eponymous first album, released this summer — presents a literal, meta take on idols in the flesh. The cult favorite Sparks, an art-rock duo formed in the 1970s, is oft-cited as an influence on the Glaswegian quartet; despite tangible differences in style and tone, the two bands merge seamlessly in the record booth — and on stage.

Thirty minutes before the show was due to start, the main theater had a docile crowd of all ages seated expectantly. The audience, which eventually filled most of the elegant theater’s general admission floor and boxes, remained seated for the opening act. The Intelligence, a post-punk band formed in the late 1990s, played high-octane tracks that ended abruptly but had the crowd tapping along, building up suitable energy.

After a brief interlude, FFS assumed the stage, at which point several of the more aggressive audience members exhorted the crowd to hasten onto its collective feet. Without much ado, the group launched into “Johnny Delusional,” the opening track off its album. The sudden launch into the set tempered the energy of the song, which otherwise perfectly sets the tone for the album.

The audience soon hit its stride, and the seats became incidental as the group ran through its set. The majority of the set list came from the July album, albeit out of order, interspersed with three hits from each component — Sparks’ “The Number One Song in Heaven” and the in-context ironically titled “This Town Ain’t Big Enough for the Both of Us” and “When Do I Get to Sing ‘My Way,’” as well as Franz Ferdinand’s “Do You Want To,” “Michael” and the ever-popular “Take Me Out.”

Having already completed its European tour, the group looked completely comfortable together on stage. Franz Ferdinand’s Alex Kapranos and Sparks’ Russell Mael shared the literal spotlight equitably, trading lines and harmonizing with no discernible awkwardness. The respective bands displayed ease with each other’s original songs, with equal parts familiarity and reverence playing across their performances and faces. Both frontmen exhibited their respective flamboyance; Mael, celebrating his 67th birthday, donned a striped poncho and camped around, while Kapranos slyly slinked around the stage, alternating deadly eye contact with the audience with theatrical gazes, beseeching the peeling paint of the Lincoln Theatre ceiling above.

Guitarist Nick McCarthy, of Franz Ferdinand, strode down the aisles early into the set, to much adoration, and took over vocals for “Thing I Won’t Get,” to much acclaim. The largely silent star of the show was 69-year-old Ron Mael, the keyboardist and creative force behind Sparks, who sat stone-faced at his keyboard for the duration of the set, barring a brief break to grab a tiny birthday hat from the audience, break into a knowing grin and do the running man on stage.

Although the younger Franz Ferdinand has enjoyed the greater share of popular success in recent years, the audience — with the exception of my friend, who confessed he did not know a single Franz Ferdinand (or Sparks or FFS) song shortly before the concert started — seemed knowledgeable of all three bands’ oeuvres. “Take Me Out” was the apex of the crowd frenzy, but Russell Mael received an impromptu birthday party of sorts from the audience, complete with posters, birthday hats, cheers and caricatures.

Except for Kapranos’ occasional peals of “Washington, D.C.!” there was little talking or introduction between tracks, until the end, when the frontmen acknowledged the conceit of the album and tour. Ending on “Piss Off” and a quick thanks — with several notable album tracks left unplayed — the performers quickly escaped the stage, biding their time until the full-throated encore calls reached their zenith. They returned for a three-song encore, finally ending on the operatic “Collaboration Don’t Work,” a song whose self-assured irony far outstrips descriptors such as “winking” or “tongue-in-cheek.”

Together, FFS belied their collective age of 239 years, delivering a consistently energetic, consuming, high-quality live performance. “What, is it 2004?” was a common reaction I heard upon disclosing the identity of the performers; although both component bands may have hit the apex of their respective popularities some time ago, their quality had never diminished — and FFS definitively augments their brilliance.