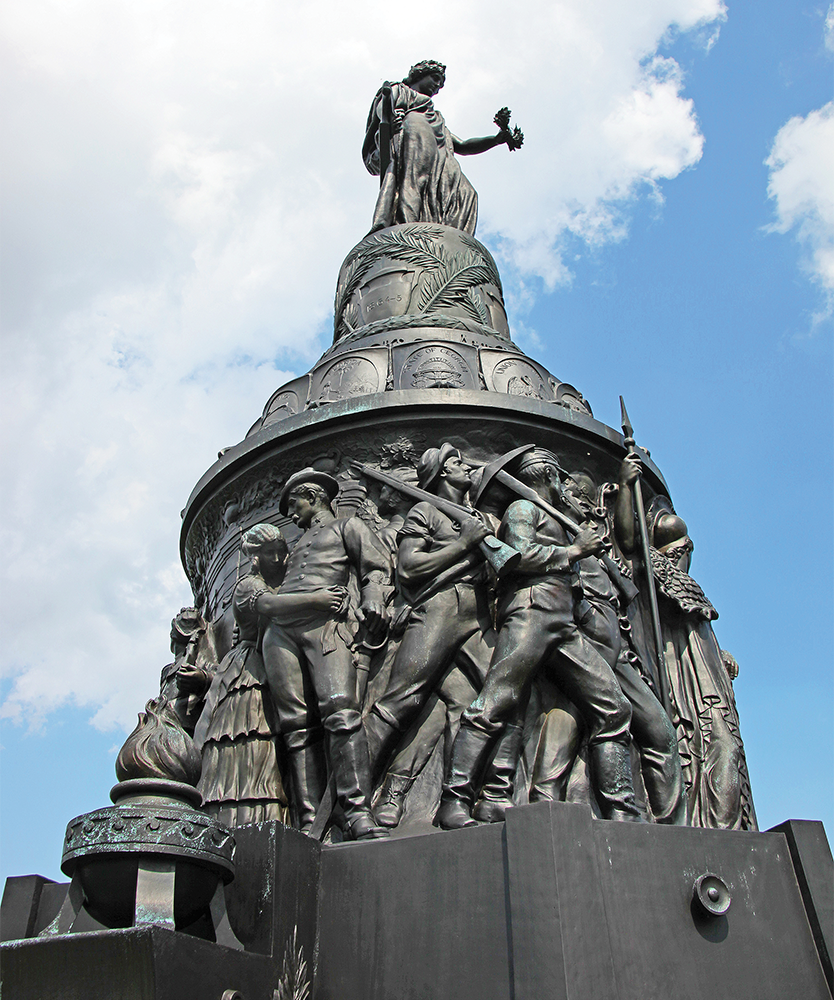 Joe Egler is a staff writer for The Hoya

Following renewed scrutiny over memorials to Confederate leaders in Washington, D.C., federal and local officials are pushing for the removal of such monuments from public property.

The increased activism coincides with a decision from the Washington National Cathedral on Wednesday to remove two stained-glass windows featuring Confederate Gens. Robert E. Lee and Stonewall Jackson and comes after violent confrontations between white nationalists and counterprotesters in Charlottesville, Va., last month.

Most recently, around 100 people who marched from Charlottesville to D.C. to protest the white nationalist rally arrived at the Martin Luther King Jr. Memorial on Wednesday.

The Aug. 12 “Unite the Right” rally, justified by organizers as a protest of the planned removal of a statue of Gen. Lee in a Charlottesville public park, resulted in three deaths, 38 nonfatal injuries and 11 arrests.

Far-right demonstrators marched through the University of Virginia campus the night of Friday, Aug. 11 chanting slogans of “white power” and “Jews will not replace us.” The following day, Gov. Terry McAuliffe (R-Va.) declared a state of emergency before the rally, and police ordered the crowds to disperse, following skirmishes between groups of demonstrators. A car later plowed through a crowd, killing one person and injuring 19 others.

The Department of Justice is investigating the incident as an act of domestic terrorism, 115 miles from Georgetown University.

Democratic congressional leaders and District officials are calling for the removal of Confederate monuments from the U.S. Capitol.

President Donald Trump has roundly condemned efforts to remove statues. After a tepid initial response to the violence in Charlottesville, Trump blamed “both sides” for the violence.

“This week, it’s Robert E. Lee. I notice that Stonewall Jackson’s coming down. I wonder, is it George Washington next week, and is it Thomas Jefferson the week after? You really do have to ask yourself, where does it stop?” Trump said at a press conference Aug. 15.

District officials have most recently voiced support for the removal of a statue of Albert Pike, a Confederate general and lifelong slavery proponent, standing in Judiciary Square.

Pike’s statue is the only outdoor statue depicting a Confederate official on federal land in D.C. Thirteen outdoor statues in the District depict Union military officials from the Civil War.

D.C. Attorney General Karl Racine joined more than half of the D.C. Council in cosigning a letter to National Parks Service Acting Director Michael T. Reynolds calling for the permanent removal of the Pike statue.

“We in the District of Columbia hold dear the values of equality, diversion, and inclusion, which are in direct conflict with the values embodied by the statue of Albert Pike,” the letter reads.

D.C. Councilmember David Grosso (I-At Large) said he is hopeful these calls for removal will be successful.

“If we keep chipping away, eventually we’ll get to a place where the United States and the citizens of the United States recognize the need for us to revisit history and to try to correct some wrongs that we’ve committed,” Grosso said in an interview with The Hoya. “And that includes apologizing for slavery, apologizing for the role that we’ve had in oppressing African-Americans in our country.”

D.C. Mayor Muriel Bowser (D) and Representative Eleanor Holmes Norton (D-D.C.) have expressed support for this effort. Norton announced in a press release Aug. 15 she will meet with Reynolds to directly discuss the removal of the Confederate statues.

In 2015, Rep. Bennie Thompson (D-Miss.) introduced a resolution to remove Confederate imagery, including that found on the Mississippi flag, from the state Capitol building in the aftermath of Dylann Roof’s violent assault on a historically black church in Charleston, S.C., that killed six women and three men. House Republicans blocked that measure, arguing state residents should decide.

“Now, the focus has shifted [from the flag] to monuments. And it is part of a long process. I mean, there have been people protesting the monuments really from the moment that they were erected,” Rothman said. “But, I think it’s just more recently that, for a whole variety of reasons, those calls have gained political traction.”

Rothman said the debate has taken on greater significance due to the rise of explicit neo-Nazism, white nationalism and the self-described “alt-right,” which, according to Rothman, has been emboldened in part by Trump’s refusal to publicly condemn far-right extremist groups.

Rothman said the erection of Confederate memorials is the result of a racist history.

“They tend to be put up in the late 19th and early 20th centuries as part of the emergence of a cult of the Lost Cause, of the glorification of the Confederacy at a moment when Jim Crow is descending on the landscape — this disenfranchisement and segregation and violence,” Rothman said.

In the same vein, Rothman said the wave of statues constructed in the 1950s was a massive resistance to desegregation, meaning that the construction of these monuments had clear political implications beyond merely documenting history.

Georgetown sociology and African-American studies professor Leslie Hinkson pushed back against the idea of fixing history by tearing down the monuments.

Hinkson said she recognized the common logic behind removing the statues — that they serve as painful reminders of the past for many and that they are not just artifacts. However, she emphasized the importance of using the statues as educational tools for the present.

“Can you imagine the German government just razing all of the concentration camps, for example? I think that would be a total sanitizing of their history,” Hinkson said. “Without those concentration camps still being there, it would provide a lot of fodder to the alarming number of Holocaust deniers that still exist today.”

Hinkson said she would express support for compromising through the addition of expanded context for the monuments.

“It’s remarkable to me how many of the monuments we have that don’t even give you the name of the individual. So, regardless of whether or not you’re meant to be learning from it or you’re meant to be honoring that individual, you have no idea how to do so,” Hinkson said.