Georgetown Confessions has drawn ire from students, parents and The Hoya’s editorial board, and for good reason. The Facebook page, founded in December but gaining widespread popularity only last month, gives students — and, it seems, a disproportionate number of non-affiliates of the university — a forum to air their darkest, most grotesque thoughts and opinions.

Most of Confessions is harmless. Some posts — “Where are all da cute Lau boys?” — are simply good fun; others — “To the cute guy on Lau 5 who watched my laptop earlier tonight: feel better soon!” — have the potential to brighten someone’s day. But a considerable number of contributions are nothing short of racist, sexist, homophobic, ableist, bigoted — you name it. Some of these carry jovial undertones but are nonetheless alarming. The page was the focus of intensified scrutiny this week after the owners — erroneously, they allege — published derogatory remarks about named individuals. And it is all the more disquieting that these posts are cloaked in anonymity, removing any measure of accountability from even the most maliciously intentioned of authors.

But at a time when such issues as lagging diversity are slowly but commendably coming to the foreground of campus dialogue, Georgetown Confessions makes an important, if unsavory, contribution.

The page is rife with Facebook users bemoaning how blinkered submissions fuel their disillusionment with the mentality on this campus and how certain posts have caused them to rethink the inherently good intentions of their peers. One post by someone identifying as a parent wrote that “the horrible comments I read on here make me question whether … my daughter made the right choice in schools and whether my money is well spent.”

In a lot of ways, this disenchantment is unfortunate. Above all, nobody should have to read affronts to elements of their identity. And to some extent, it is misguided. It would be wrong to think that the flippant, bigoted confessions are representative of the student body, that tolerance and open-mindedness wholly elude Georgetown students or that certain groups should feel unwelcome here.

But at the same time, these disillusioned comments signal a revelation that many of the thousands of the page’s followers have surely experienced but not necessarily confessed: Basic discrimination and intolerance exist at Georgetown. It is alarming. It must change.

As a reporter and editor at this newspaper, I can attest to the inferiority of anonymity. Quotations that cannot be attributed are undesirable not only because their credibility is compromised, but also because nobody is accountable for the words that are put forth. However, there are some cases in which granting anonymity to a source is valuable: to convey a compelling nugget of information, often one that can be confirmed from a variety of unnamed sources, provided by people who feel that candor would put their lives or careers at risk.

The same principle applies to Confessions. The forum conveys thoughts and sentiments that no one in his or her right mind would be comfortable publicly articulating; however, the same thoughts and sentiments govern behavior, they perpetuate norms of intolerance and they fuel outbursts of micro-aggression. What makes bigoted and intolerant attitudes so dangerous and difficult to combat is that they are hidden below the surface. This makes them hard, if not impossible, to identify or pinpoint, which in turn makes it easy to deny complaints of discrimination from minority groups — and worse, to collectively deny as an institution that such attitudes exist here.

That denial — or for many, aloofness — is the single most damaging obstacle to efforts toward change. Absent evidence, those fighting for change risk charges of delusion or pettiness. Movements to increase tolerance on campus are likely to touch only those who have themselves encountered intolerance.

Given its broad reach and popular appeal, Confessions has the potential to chip away at this widespread complacency by attuning those far removed from struggles with intolerance and compelling them to form opinions and rise to the challenge of making Georgetown an inclusive place.

As one confessor put it, “Georgetown is all about dialogue, and sometimes that entails harsh comments or s—- that we might not want to hear. Honestly, I think it makes us all the better.”

BRADEN MCDONALD is a junior in the College. He is former executive editor of The Hoya and currently serves on its Board of Directors. 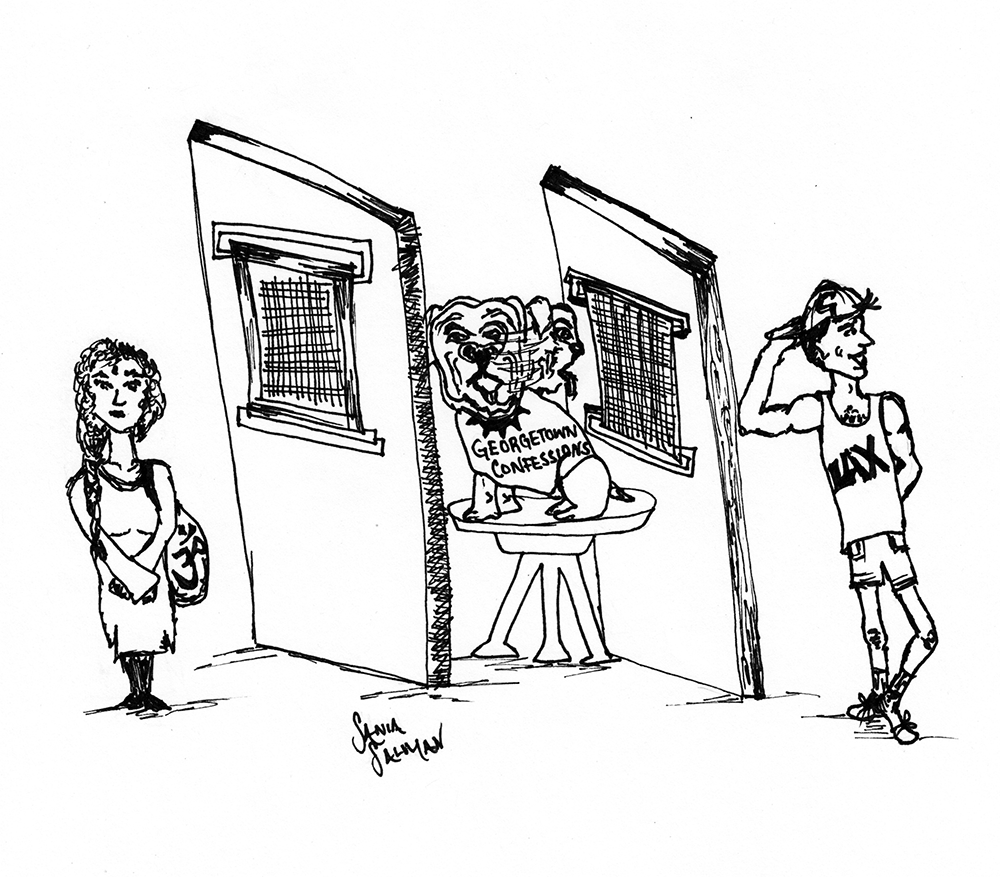