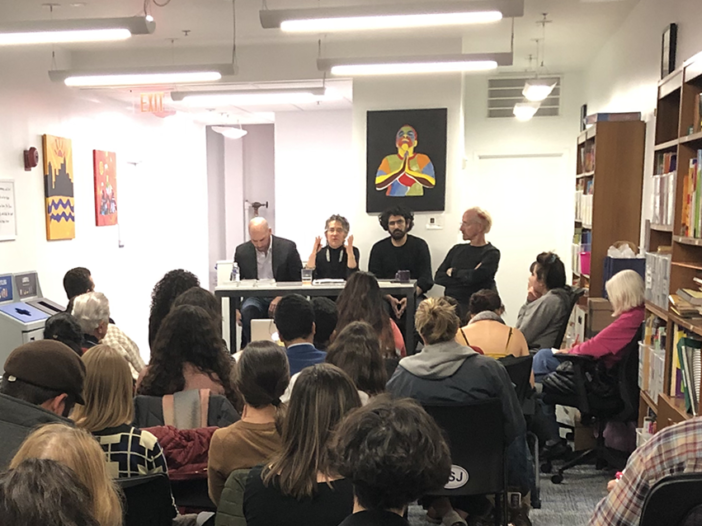 Congressional pushback on presidential foreign policies is essential to quelling the escalating tensions between Iran and the United States, Program Director of the Institute for Policy Studies Phyllis Bennis said in a panel Monday.

The event, titled “Iran on the Brink of War: A Teach-In,” was sponsored by the Program on Justice and Peace and the Center for Social Justice Research, Teaching and Service. Panelists for the event included Bennis, Georgetown University graduate student in philosophy Keyvan Shafiei and Deputy Director of the Arab American Institute Omar Baddar. The event was moderated by professor of philosophy and Co-director of the Program on Justice and Peace Mark Lance.

Less than two weeks before the event, the Trump administration ordered an airstrike that killed Iranian Major General Qassem Soleimani and several Iraqi militia officers Jan. 3. The airstrike followed an attack by the Iranian militia on the U.S. embassy in Baghdad, Iraq, on Dec. 31. While the Trump administration has claimed that killing Soleimani was a necessary defensive action to deter future Iranian attack plans, many Iraqi and Iranian officials have condemned the strike as an act of aggression and have warned the United States to expect retaliation, according to The Washington Post.

Given public concern about executive overreach when declaring war, Congress can best deescalate the current situation between the United States and Iran, according to Bennis.

“Right now Congress is the key,” Bennis said. “There are finally people in Congress willing to fight back just a little bit against these rogue administrations that believe that presidents have the right to just go ahead and go to war wherever they want upon whatever excuse they want for whatever reason without any concern for the consequences.”

From 1998 until his death, Soleimani was an Iranian Major General in the Islamic Revolutionary Guard Corps, a branch of the Iranian Armed Forces that protects the country’s Islamic republic political system. In retaliation for killing Soleimani, Iran fired missiles at two Iraqi military bases in Irbil and Al Asad that housed U.S. forces Jan. 8, according to BBC.

Such retaliation is not a cry for war, but a sound response to the loss of the Iranian leader, according to Shafiei.

“I think the response was carried out quite reasonably given the enormity of the loss for the Iranian government and the Iranian regime,” Shafiei said. “I’m not sure anyone is really beating on the drums for war in Iran; the people certainly are not.”

While Soleimani had been accused of implementing violent domestic and foreign policies, the United States did not have the right to kill him, according to Bennis.

“Even if this guy had been a terrorist, had attacked civilians, does that give us the right to just kill him because we found him in our sights?” Bennis said. “That is what we have come to. The notion that it was somehow okay to kill him is driven by this global war on terror assumption.”

Diplomatic relations between the United States and Iran worsened after the Trump administration pulled out of the Joint Comprehensive Plan of Action in May 2018, according to Reuters. The JCPOA, signed in 2015 under President Barack Obama, limited the scope of Iran’s nuclear program in exchange for easing economic sanctions.

While pulling out of the nuclear deal has reportedly been the primary reason behind the contentious relationship between the two nations, the principal conflict between the two countries is regional authority issues, Baddar said.

Later in 2018, the United States reintroduced sanctions on Iranian oil assets and trading services, according to the Australian Broadcasting Corporation. Sanctions, like war, have a crippling effect on the nation and its people, according to Shafiei, whose father suffered from a rare disorder and was unable to receive necessary medicine as a result of U.S. sanctions on Iran.

“When politicians tell you that sanctions are an alternative to war, do not be fooled. They are violence.” Shafiei said. “Sanctions hurt people and they’ve hurt me, and I will do everything that I can in my power to try and make sure that the people I am voting for in this upcoming election know that I do not support sanctions.”

Even if the Trump administration does not intend to incite a war with Iran, its current actions have further destabilized the two nations’ relationship and have also caused Iranians to suffer for their government’s actions, according to Baddar.

“I think Donald Trump might believe himself when he says he doesn’t want a war with Iran,” Baddar said. “But he has charted out a course in U.S. policy that has guaranteed a confrontation with Iran by tearing up the nuclear deal, shutting down any avenue for diplomacy, by imposing crippling sanctions on the Iranian economy, sanctions that increase the Iranian people’s suffering as a means of pressuring the Iranian government to change its behavior.”