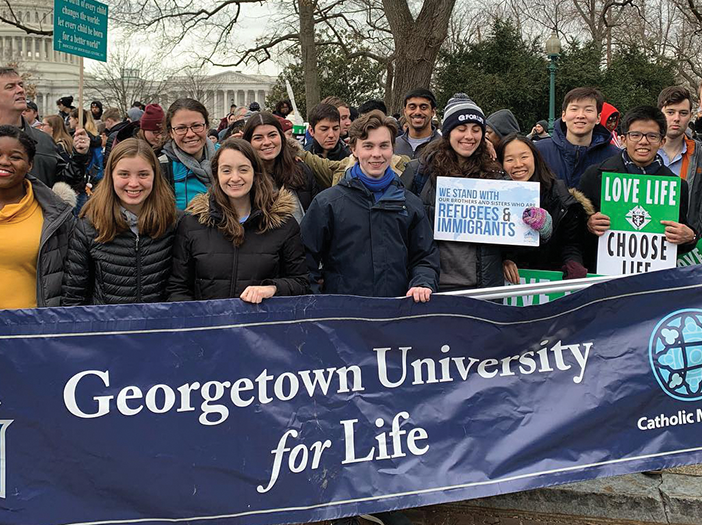 During the 2016 presidential campaign, professor Michael Czinkota, a self-identifying conservative who teaches classes in international trade and international business in the McDonough School of Business, hung a “Faculty for Trump” sign outside of his office door.

Instead of stirring controversy, the sign led to 15 students gathering in Czinkota’s office for productive and meaningful debate, according to Czinkota, who donated twice to President Donald Trump’s 2016 campaign.

“What I have encountered is, people are polite,” Czinkota said in an interview with The Hoya.  “People hold open doors, people say good morning, which is not ubiquitous. I tell my students that we can have any kind of discussion that we want.”

An electronic survey of 228 Georgetown University undergraduate professors conducted by The Hoya during the fall 2019 semester showed that professors at the university largely identify as Democrats.

While underrepresentation of conservative viewpoints in the classroom is quantitatively and anecdotally apparent among faculty members, this minority status affects students differently than it does professors, as some students in conservative-leaning groups on campus report being judged for their political views.

Among Georgetown faculty members with political party registration, 71.4% identify as Democrat, 13% as Independent and 4.5% as Republican, according to an electronic survey administered by The Hoya. The survey had a margin of error of 6%.

The national trend for political party registrations and ideological leanings of college professors skews Democratic and liberal, according to data from the Higher Education Research Institute, an institution that conducts longitudinal research on higher education in the United States.

As of 2014, the ratio of liberal to conservative professors at four-year universities is 6 to 1, according to research by Samuel Abrams, a professor of politics at Sarah Lawrence College who used data from HERI.

The breakdown of Georgetown professors’ political affiliation is alternatively expressed by examining nonstudent Georgetown employee donations to political campaigns and other political causes. Less than 3% of these employees donated to Republican or conservative-leaning causes, while 95% donated to Democratic or liberal-leaning causes, according to an analysis of Federal Election Commission data from 2016 to 2019.

Although the relative absence of conservative faculty members is somewhat concerning to Czinkota, he has not felt that his beliefs are unwelcome at the university because of a widespread culture of civility and open communication.

Despite his political preferences and donations to the Trump campaign, Czinkota said he rarely incorporates political news into his teaching, except in instances when it is directly relevant to curriculum topics.

Czinkota remembers one class in which he was able to tie the themes of the course to Trump’s international trade policy following the president’s decision to impose tariffs on Europe and Latin America.

“Pretty much the entire session was sort of back and forth between conceptual, ‘What is a tariff, why do we do tariffs?’ and real-time, ‘What has the President done, why has he done it, what effect will it have?’” Czinkota said.

Similar to Czinkota, law professor John Hasnas recognizes that he is in the ideological minority at Georgetown. Hasnas does not subscribe to party politics, however, instead identifying with the philosophy of classical liberalism, supporting policies that favor a limited government role in the lives of civilians.

Political tension among colleagues at Georgetown is nonexistent, according to Hasnas. The only bias that Hasnas perceives is in the process of hiring new faculty members.

“Our relationships are based on mutual goals,” Hasnas said in an interview with The Hoya. “We’re working together; we respect each other. I think most faculties it’s like that. If there’s some kind of bias at work it’s not among the faculty. It’s who gets to join the place.”

In 2016, Hasnas wrote an article in The Wall Street Journal calling for universities, including Georgetown, to change their hiring practices to ensure ideological diversity among staff because of his concern about the lack of conservative professors.

Though he recognizes efforts by Georgetown to prioritize diversity in some respects, he still feels that ideological differences are not valued enough when the university hires faculty.

While some conservative professors are not particularly bothered by their political minority status, some students on campus have experienced more palpable tensions with their ideologically opposed counterparts.

Kaitlyn Reynolds (COL ’21), a moderate conservative and member of GU Right to Life, a student organization that works to protect human life from conception to natural death, noted that she felt unwelcomed when displaying her pro-life beliefs in Red Square. While tabling for the club, Reynolds recalls glares and hostility from passersby.

“People would walk by and these people would give me nasty looks like they hated my guts,” Reynolds said in an interview with The Hoya. “It’s always just been, like, the general attitude and disposition, feeling like I am the enemy or that our group is anti-women.”

“We were just handing out free Constitutions, and there is nothing inherently partisan about it,” Tatlock said in an interview to The Hoya. “But people were giving us such dirty looks as they walked past us.”

GU Right to Life, unlike GUCR, is not a political organization with a specific party affiliation, according to Reynolds. Club members come from a variety of political backgrounds, although its membership does skew toward being conservative, Reynolds said. The club has expanded beyond activities like marches against abortion, to events like diaper drives and hospital volunteering.

Director of Communications and Media for H*yas for Choice Chloe Kekedjian (COL ’22) disagrees with Reynolds’ apolitical characterization of GU Right to Life.

The mission of GU Right to Life as an attempt to limit reproductive rights is in direct contrast with the mission of H*yas for Choice, according to Kekedjian.

“We can’t speak on what it means to be pro-life, but we largely see it as anti-choice, as their focus is largely on restricting reproductive rights,” Kekedjian wrote in an email to The Hoya. “Their mission actively goes against our fundamental belief that all people have a right to bodily autonomy.”

Kathryn Baker (COL ’20), who formerly tabled for GU Right to Life and identifies as a liberal-leaning independent, agrees with Reynolds’ claim of political diversity within GU Right to Life but denies having experienced similar antagonism. (Full disclosure: Baker previously served as an executive editor for The Hoya).

“I think plenty of people at Georgetown are sympathetic to the pro-life cause,” Baker said in an interview with The Hoya. “More broadly, I think this university just wants to support student activism and political engagement on both sides of the aisle. I’ve never had a faculty member or higher-up at Georgetown shame me or make me feel unwelcome on this campus.”

Despite her own experiences tabling for GUCR, Tatlock also says she has not experienced resistance when she expresses conservative views. Some conservative students, however, may temper what they say to others because of their ideological minority status, according to Tatlock.

“I don’t shy away from the fact that I’m conservative, and I’ve never really had much pushback or negative experiences with it,” Tatlock said. “I know that there is this kind of idea that we are a minority on campus, and for a lot of people that means watching what they say.”

In recent years, both student- and university-led organizations have been created at Georgetown to help ameliorate political tension. Groups like Georgetown’s Institute of Politics and Public Service and the Georgetown Bipartisan Coalition have attempted to encourage political discourse on campus.

GU Politics, founded in 2013, promotes such discourse by hosting various discussion-oriented events and by enlisting political leaders from both sides of the aisle to guide students in conversation.

One of the goals of the Fellows Program is to bring diverse viewpoints to Georgetown, including diversity of political ideology, according to Carly Henry, chief of staff at GU Politics.

“Past fellows have included members from both parties (and even both the Obama and Trump White Houses), and we’ll continue to bring this diversity to campus,” Henry wrote in an email to The Hoya. “Our Institute grows by prioritizing balanced classes of fellows.”

GU Politics’ philosophy is informed by a desire to educate the student body on political issues and bring new opinions to campus, according to Henry.

“All of our programming is aimed at exposing them to how politics actually works, helping them build their professional network, and giving them insider access to major players in the political space,” Henry wrote. “Perhaps one of the most beneficial things we do is expose students to opinions outside of the ones they hear every day.”

Kekedjian, however, believes that equal representation of political beliefs is not necessary for good political discourse and that students should instead engage in discussing salient topics.

“Over-focusing on representing conservative viewpoints misses the point,” Kekedjian said. “If Georgetown students are largely liberal, that shows a trend for where future political discourse is going.”

When students are willing to engage in debates on contrasting political viewpoints, it shows mutual respect for one another, according to Hasnas.

“When people disagree with you, that’s not a sign of disrespect. If someone is disagreeing with you and talking to you, that means that person thinks that your mind is worth changing,” Hasnas said. “What you should be upset about is if someone ignores you or won’t listen, then they’re treating you with disrespect.”