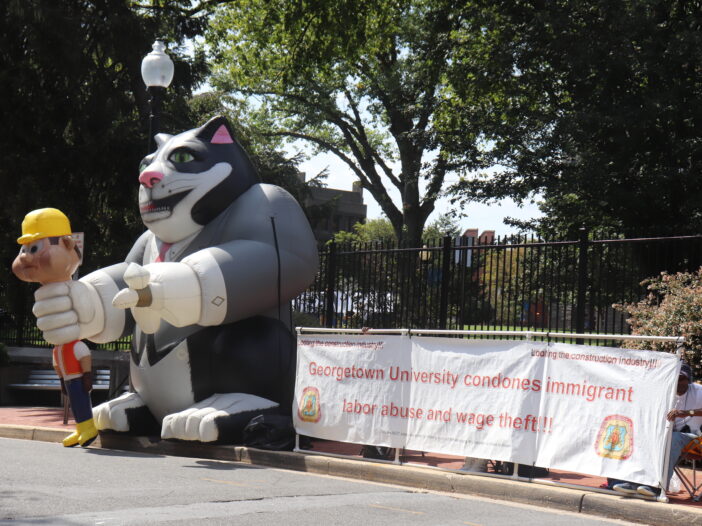 By Sept. 20, the protesters — affiliated with the union Eastern Atlantic States Regional Council of Carpenters (EASRCC) — had become regulars on the sidewalk outside the front gates. They had been demonstrating there for several months, in protest of alleged labor violations that construction companies Dynamic Contracting, Inc., Gilbane Building Company and GSA Construction, Inc. had perpetrated against construction workers during renovations on Georgetown dorms.

On this particular day, the blow-up cat was a new addition, but like the days before and the days that followed, the protesters handed out flyers and asked passersby to call on the university to improve its labor policies for construction workers.

The protests began after construction workers Oscar Ramirez and Enoc Rodriguez filed a class-action lawsuit in April 2021 against Dynamic, Gilbane and GSA, accusing them of labor violations during the Georgetown construction projects. Georgetown is not a defendant in the lawsuit.

The lawsuit is ongoing, but the protesters can no longer be found outside Georgetown’s front gates. They stopped protesting after the university announced policy changes in early October to better protect construction workers at Georgetown in the future.

On Apr. 30, 2021, plaintiffs Ramirez and Rodriguez filed the lawsuit against defendants Dynamic, Gilbane and GSA of misclassifying workers as independent contractors and stealing wages as a result of that misclassification.

All three defendants, subcontracted at any level, would be found jointly responsible for the alleged wage theft if found guilty under D.C. Code § 32-1012(c), which permits civil actions against employers when they pay less than minimum wage.

The alleged violations occurred on Georgetown’s campus, but the university is not implicated in the lawsuit.

Dynamic and Gilbane did not respond to The Hoya’s requests for comment. Public records show only one agent working for GSA, who could not be reached for comment in time for publication.

Ramirez and Rodriguez, construction workers under GSA and Dynamic, alleged the companies stole their wages while they were working on the university’s main campus construction projects. From approximately November 2020 to February 2021, they worked on renovations of Village C East and West, referred to as the “Project,” according to the civil action notice.

The lawsuit said the plaintiffs were also purposely and illegally classified as independent contractors instead of employees. This distinction meant the plaintiffs did not receive their legally required overtime pay of one and a half times the regular wage, in violation of the D.C. Minimum Wage Act, as well as benefits, according to the lawsuit.

Both Rodriguez and Ramirez earned a base wage regardless of how many hours they worked per week on the Georgetown project, according to the lawsuit.

“For example, Plaintiff Rodriguez earned $21 per hour. In addition to his schedule of eight-hour shifts Monday-Friday, he sometimes worked double shifts, adding up to 16 hours in one day. He also sometimes worked an eight-hour day on Saturdays. This schedule meant that he regularly worked in excess of forty hours per week,” the lawsuit said. Ramirez had the same experience, according to the lawsuit.

Rodriguez and Ramirez could not directly speak to The Hoya because of pending litigation and instead were represented by one of their lawyers, Matthew Kaplan (SFS ’86).

The construction industry is especially vulnerable to this type of wage theft because many construction workers are immigrants who do not speak fluent English, according to Kaplan.

“You’ve got a lot of laborers. The vast majority in this case, and in many cases, are immigrants — Spanish speakers, generally,” Kaplan said in a Zoom interview with The Hoya. “The employers think that they’re not going to complain, or such a small percentage will complain that it’s still in the economic interests of the construction companies to not pay the overtime.”

Subcontracting the labor supply to other companies — making it difficult to trace who is responsible — is a common tactic within the construction industry to facilitate this alleged illegal activity, according to Joseph McCartin, executive director of Georgetown’s Kalmanovitz Initiative for Labor and the Working Poor, a group that develops strategy and policy to improve workers’ lives.

“I was not surprised to learn that it was happening at Georgetown because it’s so rampant in this region,” McCartin said in a Zoom interview with The Hoya. “Subcontractors and sub-subcontractors were engaging in the use of labor brokers, as they’re called, to recruit workers to work on these jobs.”

The illegal practice of worker misclassification allows contractors to pay less in taxes, which negatively impacts everyone else, according to Bob Burns, EASRCC’s D.C. and Virginia regional manager. EASRCC helped Rodriguez and Ramirez come forward to file the lawsuit.

This complaint alleges Gilbane, Dynamic, GSA and other companies misclassified workers, failed to pay overtime, failed to provide paid sick leave and failed to keep payroll records. This complaint is likewise tied to alleged violations that occurred during renovation projects on VCE and VCW at Georgetown.

Georgetown does not have any legal exposure in the case — the distance between the university and the construction companies is big enough to provide the university with adequate legal cover, according to Burns.

But in some ways, Burns continued, it doesn’t matter whether Georgetown is legally liable. The university still has a moral responsibility for the alleged illegal activity because it occurred on campus.

“They all work for Georgetown. At the end of the day, the general contractor is going to do what the end user wants. That’s who’s paying the bill,” Burns said.

This isn’t the first time Georgetown has been tied to labor issues. Campus employees have previously protested their wages and contracts, including in 2019 when employees of Leo J. O’Donovan Dining Hall unionized through campus food service provider Aramark and staged several rallies to demand better wages and working conditions.

EASRCC brought this labor issue to the university’s attention multiple times over the past year, but Georgetown failed to prioritize it, according to Burns. While the lawsuit was first filed in April 2021, the university did not adopt new standards that ensure the construction companies they hire are following the law until October 2021.

Burns said the university’s initial inaction was frustrating, especially given its connection to workers’ rights groups. The university’s agreements with the construction companies did prohibit illegal behavior, but Burns alleged they were not strictly enforced under Georgetown’s supervision before this incident.

“Georgetown is one of the most prominent universities in the world, and they advocate for workers through the Kalmanovitz Initiative,” Burns said. “Yet, they can’t get it right in-house. And it’s extremely frustrating to us.”

The Kalmanovitz Initiative has consistently provided the university with recommendations on workers’ rights on campus throughout Georgetown’s history of labor disputes. The initiative met with EASRCC to discuss the alleged wage theft at Georgetown, according to McCartin. The Kalmanovitz Initiative also held advisory committee meetings in late spring 2021 with the university administration to discuss the labor issue.

“I have talked to the protesters and to the people of the union. They brought evidence of this. They also shared that evidence with the administration,” McCartin said.

The EASRCC also helped organize the protests at the front gates, which were designed to bring public awareness to the issue of the alleged wage theft at the university and facilitate student, faculty and community involvement, according to Burns.

The Hoya tried on several occasions to interview different protesters, but they all told The Hoya the union instructed them not to speak with the press. The EASRCC also declined The Hoya’s requests to view the evidence of labor violations that it shared with the Kalmanovitz Initiative and the university.

The Georgetown Coalition for Workers’ Rights (GCWR), a group of undergraduate students, graduate workers and staff advocating for fair treatment of university employees, coordinated with the union to educate the Georgetown community on wage theft occurring on campus, according to Leo Rassieur (COL ’22), a member of GCWR. GCWR also offered their support to EASRCC to help with the protests.

Rassieur said the labor of construction workers is responsible for the improvements on campus, and that therefore students have a collective obligation to understand their hardships and speak out against their exploitation.

Georgetown announced Oct. 6 that the university will incorporate new labor standards into construction contracts moving forward, according to the university’s Office of Public Affairs. The new policy falls under the purview of Georgetown’s Advisory Committee on Business Practices, which handles the ethical side of Georgetown’s labor policies.

The policy addresses several concerns that the union and lawsuit brought up. It requires construction managers and their subcontractors to submit a certified payroll to Georgetown and pay their workers a fair wage. Georgetown also can investigate construction companies’ compliance with labor standards on university construction sites, according to the page.

“Georgetown is also committed to verifying that work performed on current construction sites is in compliance with applicable employment and labor laws,” the page reads.

The university declined to comment on the seven-month period in between the filing of the lawsuit and Georgetown’s announcement of a new construction worker labor policy. The university also declined to confirm whether the labor violations had occurred and, if they had, whether the Advisory Committee on Business Practices knew about it.

“We developed these new labor standards after researching best practices for protecting the rights of workers in the construction industry,” a university spokesperson wrote in an email to The Hoya.

For Rassieur, the recent policy change represents a positive change in protecting workers’ rights at Georgetown. However, he remains skeptical of how the university will execute the new labor standards.

“This policy change is definitely a move in the right direction, and a sign that the union’s protest methods were highly effective in pressuring Georgetown into taking action,” Rassieur wrote in a follow-up email to The Hoya. “I am looking forward to seeing the University publish more details on what those updated labor standards look like and whether investigations into wage theft and exploitation will actually happen.”

Burns expressed his gratitude for the university’s policy and is optimistic it can finally put an end to wage theft at Georgetown. He hopes other institutions will be inspired to implement similarly strong labor standards.

“Just adopt some labor standards with some teeth to ensure it won’t happen again, and set an example,” Burns said. “It’s time for end users to step up and say, ‘Enough’s enough. I don’t want illegal activity on my worksite.’”

CORRECTION: A previous version of this article wrongly stated that the chair of the Advisory Committee on Business Practices did not respond to multiple requests for interview. The article has been updated to reflect this information.