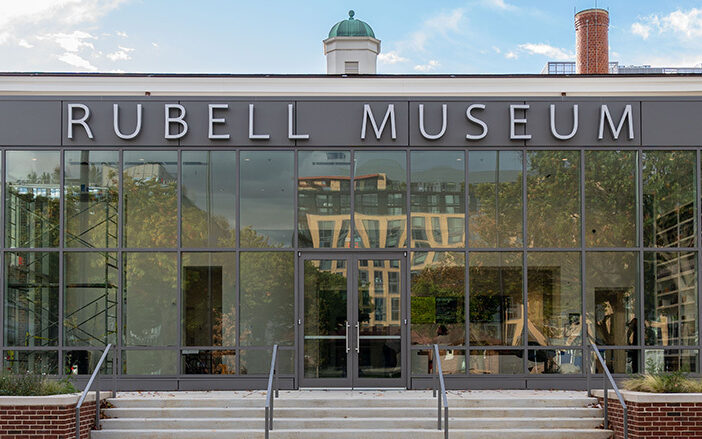 Named after longtime art collectors Mera and Don Rubell, the museum on 65 I Street SW comes as the culmination of a $20 million effort to transform a former junior high school into a space for art. The museum’s location used to be the site of Randall Junior High School, a historically Black school that closed in 1978. George Washington University’s Corcoran School of the Arts and Design purchased the property in 2006 before selling it to the Rubells in 2010 for $6.5 million.

The Rubell couple began collecting artwork in 1964. They have spent the majority of their careers in Miami, showcasing works to the public from their collection of over 7,400 pieces. The Rubells also supported many well-known artists at the beginnings of their careers, including Jeff Koons, Jean-Michel Basquiat and Cecily Brown.

Rubell Museum Director Caitlin Berry said the museum’s historical setting encourages artists to take on the role of teachers and challenges viewers to learn about complex issues like race in society.

“The museum’s unique setting in the former Randall Junior High School emphasizes the important role of artists as teachers,” Berry wrote in an email to The Hoya. “In the galleries, students will encounter thought-provoking works by the some of the most compelling artists working today, offering new frameworks for exploring themes such as race, gender, and the environment.”

Berry said the museum’s focus on contemporary art will help enrich the variety in the District’s art scene.

“Joining the city’s already vibrant landscape of cultural institutions, the Rubell Museum DC further diversifies the city’s wealth of offerings as an institution focused solely on contemporary art,” Berry wrote. “The museum is a platform for sharing diverse viewpoints that speak to our current social, political, and cultural moment, providing added opportunity for DC audiences to reflect on lived experiences that are both personal and universal.”

Unlike other art museums in D.C. — like the Smithsonian Institution’s museums, which receive funding from the government — the Rubell Museum is funded by grants, sponsorships and the Rubells’ own contributions. Entry fees for non-D.C. residents range from 10 to 15 dollars.

Beyer Blinder Belle (BBB) — an architecture firm based in New York City — helped the Rubells design the building. The Rubells added artwork to the building without changing its original layout of classrooms and offices.

However, the new museum building features a new glass pavilion at the entrance to the school, which includes a bakery, bookstore and terrace, according to Hany Hassan, a partner at BBB.

“The Rubell Museum is a transformative project in the heart of the historic Southwest area,” Hassan said in a press release shared with The Hoya. “It will give a new life to the historic Randall School — an iconic building with a rich social and architectural history.”

Mera Rubell was a teacher making $100 a week and Don Rubell worked as a doctor when they first started collecting art in the 1960s. Mera Rubell said her experience as a teacher prior to becoming an art collector influences her view on the role of art.

“As a former teacher, I see artists and teachers playing parallel roles as educators and in fostering civic engagement,” Mera Rubell wrote in a press release shared with The Hoya.

The museum’s inaugural exhibition, titled “What’s Going On,” features more than 190 pieces of work from 50 artists. The exhibit’s title stems from the 1971 album by Marvin Gaye, an alum of Randall Junior High School, which critiques issues such as the Vietnam War, drug abuse and environmental destruction.

The exhibition also includes the work of famous American pop artist Keith Haring. The Rubell Museum showcases his composition “Untitled (Against All Odds),” which features more than 20 works that bring viewers into a dystopian world full of Haring’s concerns, including environmental destruction and oppression.

Berry said the museum will continue to highlight several works from the Rubell Family Collection, which includes paintings, photographs, sculptures and site-specific work from around the world. “As with the inaugural exhibition, What’s Going On, future presentations will draw together works from the family’s holdings that demonstrate the importance of artists’ voices in contributing to a national dialogue,” Berry wrote.