Contraception: It is a word that invokes many different emotions.

There is evidence to suggest that sex education including information on both contraception and abstinence helps young people delay sex.

According to “Emerging Evidence, Lessons and Practice in Comprehensive Sexuality Education: A Global Review,”  a study by the United Nations Population Fund, “many of these programs have resulted in delayed sexual debut, reduced frequency of sex and number of sexual partners, increased condom or contraceptive use, or reduced sexual risk-taking.”

The only 100 percent effective method of preventing STIs and pregnancy is abstinence.

Furthermore, contraception can be used for certain purposes other than preventing pregnancy. For example, there are a number of reasons why one may choose to take birth control medication.

The birth control pill is often used to lighten periods, reduce menstrual cramps and subdue premenstrual syndrome. According to Planned Parenthood, the combination pill may also reduce or help prevent acne, anemia, bone thinning, cysts in the breasts and ovaries, endometrial and ovarian cancers and serious infections in the reproductive system.

But that is just scratching the surface of intricacies surrounding contraception. Students seeking information may not be able to answer all of their questions on campus.

The LGTBQ Resource Center, the Women’s Center and the Student Health Center are not permitted to refer students to organizations that offer abortion. Though physicians and nurse practitioners at the Student Health Center may prescribe birth control, they are not permitted to do so for the express purpose of preventing pregnancy. Georgetown University will also not contract, arrange or pay for contraceptive coverage.

Divisions over contraception are clear on campus.

H*yas for Choice and Georgetown University Right to Life, formerly known as Vita Saxa, table just feet away from each other in Red Square. While GU RTL does not have a formal stance on contraception, its overall take on reproductive rights contrasts with HFC’s progressive attitude. These two organizations, among others, represent a small microcosm of the student body at large.

Amelia Irvine (COL ’19) and MyLan Metzger (COL ’19), president and vice president of Love Saxa, a campus organization dedicated to promoting chastity and marriage between a man and a woman, do not believe the university should fund contraceptives.

“No one has the right to sex without consequences. Having sex in college is a choice, a choice that Georgetown has no obligation to materially support or endorse,” Irvine and Metzger wrote in a joint email statement to The Hoya. “It is our hope that Georgetown students would embrace a safer, healthier lifestyle of chastity, one in which birth control is not a necessity.”

Considering the current sociopolitical atmosphere, it is pertinent than ever that we pay attention to the university’s policies on contraception, according to Michaela Lewis (COL ’18) and Annie Mason (COL ’18), co-presidents of pro-abortion rights group H*yas For Choice.

“The most targeted communities are low-income and working class dependents whose parents/guardians do not have adequate insurance through their employers. Graduate students who are not dependents and do not receive private insurance through an employer are also particularly vulnerable to any changes the University may choose to make regarding birth control coverage,” Lewis and Mason wrote in an email statement to The Hoya.

Ultimately, it is most imperative that students be aware of different contraceptive options and be able to make educated decisions about what option is right for them. 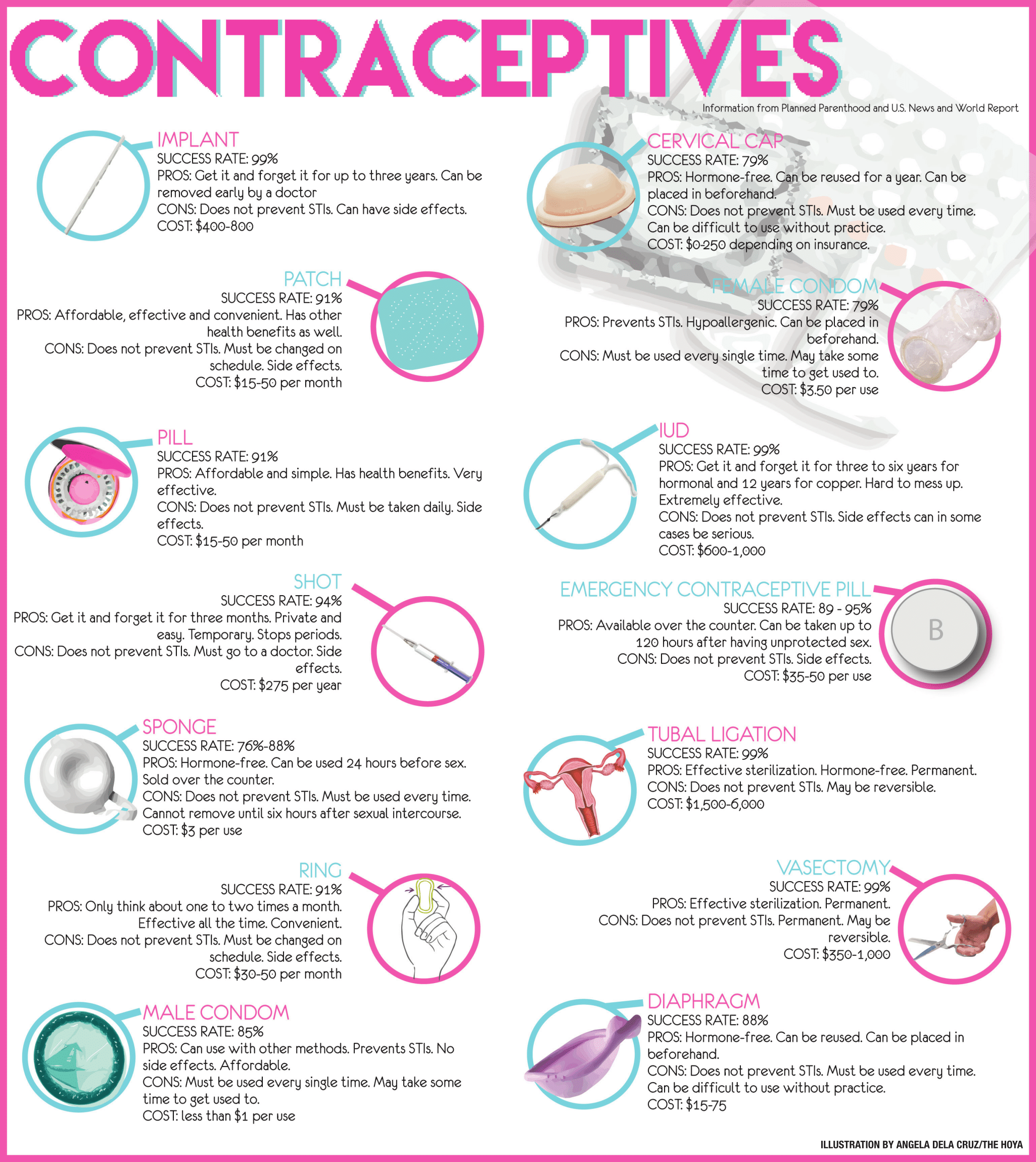