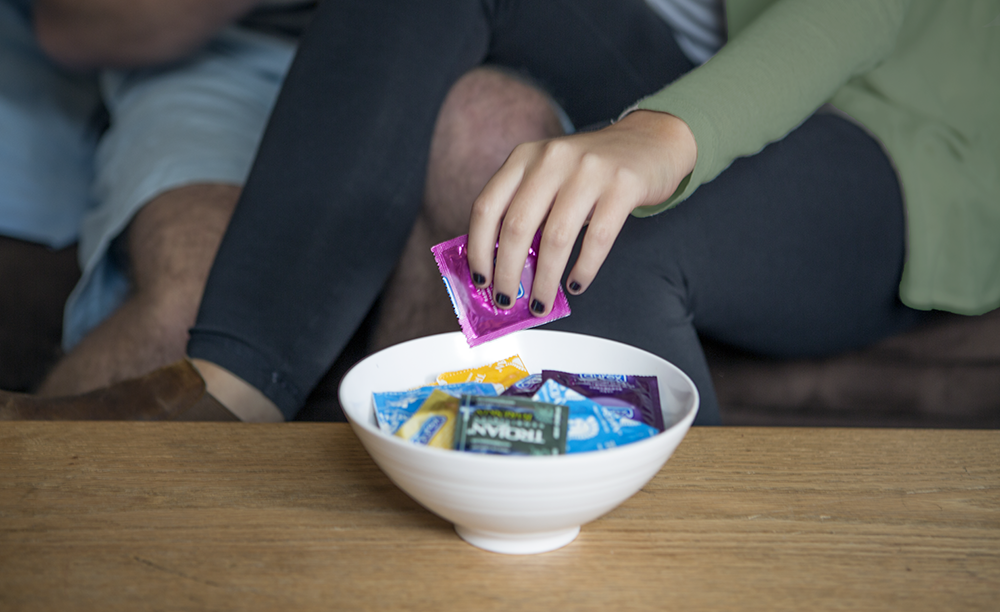 On the stacks at Vital Vittles, students can find a range of useful medicinal products to help them survive college life. Whether it’s cough drops or NyQuil, the independent, student-run Students of Georgetown Inc. ensures that its flagship store is stocked with basic medical necessities.

This is not a new issue. In fact, reproductive rights represent one of the most widely reported and discussed issues on campus. No one can miss the tense tabling in Red Square with “Vita Saxa” and “H*yas for Choice” sitting across from one another, the first displaying pamphlets with pictures of a child’s handprint, and the other with a bowl of condoms that students can take for free.

The main difference students think about when comparing these two student groups is the right to life versus right to choose abortion argument. H*yas for Choice has gained a reputation for its pro-choice protests over the years, but it has worked equally to provide students with contraceptives as well, as seen by its tabling tactics. H*yas for Choice is leading the fight to get the university to allow contraception to be sold on campus.

“I would say that most of our day-to-day activities focus around providing students with contraception and information about it. We distributed around 10,000 condoms last semester,” H*yas for Choice President Abby Grace (SFS ’16) said.

The high level of student demand not only poses a logistical problem because the group is not financially supported by the university and therefore reliant on donations.

“The thing that really gets me is not that they [the university] do not distribute it. Let’s just say that’s reasonable, but they don’t let The Corp or [Wisemiller’s] sell contraception. They’re two completely independent businesses,” Grace said. The N Street grocery and deli is located on university-owned property.

A large amount of attention has been devoted to pushing for sexual health reform, as many are frustrated that an elite university such as Georgetown has such restrictive policies.

In Trojan Brand Condoms’ 2014 Sexual Health Report Card, Georgetown ranked 93 out of 140 college campuses (THE HOYA, GU Ranks Low in Sexual Health, Feb. 6, 2015, A1). While this rank puts it above all other Catholic universities, its often self-imposed limits create problems for students coming from communities where formal sexual education is minimal and the topic is barely discussed within the family.

“I think generally students here are aware that they should use contraception,” Grace said. “But, for example … I grew up in Mississippi where there are basically only public schools where the only sex education that was approved was this abstinence-only teaching, which provided absolutely no information whatsoever.

Emily Lett (COL ’17), from Spotsylvania, Va., did not fully understand Georgetown’s policy on contraception until a few weeks into her freshman year, as there was little effort on the University’s part to reach out and engage students on these subject.

While she personally was not affected by the policy, having already organized a prescription to be on the pill and already aware of how to get condoms off campus, the ban on selling contraception on campus still frustrates her.

“I think mainly it’s because of where I’m from,” Lett said. “In middle school and high school, a lot of students were sexually active from a young age. From poorer places like that, sex education and resources are lacking. It makes me mad, because back home there are so many young girls who are pregnant because they don’t have access to education or resources, and it’s not fair to the child or the parent when it’s because they just didn’t have access to protection or didn’t understand how it works.”
In Lett’s graduating high school class, at least three girls were pregnant.

“I just believe that contraception and information should be available to everyone, because it wasn’t where I grew up. And it makes me so mad that Georgetown isn’t better than Spotsylvania,” Lett said.

Amy* (MSB ’17) has had unprotected sex with three people. She is not on the pill mainly because she cannot get it on campus and cannot easily find the information here to understand how to get it.

“The first time [I had unprotected sex] was with one of my best friends,” Evans said. “That was last year. Then the second was with a guy I was seeing over summer back home. He never even pretended like using protection was an option. He came from a very poor area, so I don’t know if it came from that, or [it was] just … his thing. The third was like the first — I had to ask him every time to use protection, and then one time, in the heat of the moment we didn’t. After that, I guess he just expected that we wouldn’t, so it didn’t come up again.”

Joe Smith* (SFS ’17), who admits that he has unprotected sex fairly frequently, explains that if the girl is on the pill, they will tend to mutually choose to not use condoms.

“Normally the first time with someone I use a condom,” Smith said. “If we choose to have sex again after that, then I get checked out, and if there are no issues, and she is on the pill, then there are no major health reasons to use condoms.”

Smith also explained that when it comes to deciding who should provide the contraception, he believes responsibility should be equally divided.

Aside from condoms, the other main choice is birth control pills for women. However, this form of contraception is not without its complications.

Lett first started taking birth control pills when she was 15 to deal with acne, a popular reason for women to take the medication. At the time she had a serious boyfriend, whom she was with until she came to Georgetown. Shortly after coming to campus she met John*, whom she has been dating ever since. Last summer, Lett decided to change the type of pill she’d been prescribed as a result of her severe cramps.

“When I went on birth control in ninth grade, it changed my hormones. And I was a teenager, so we were all pretty emotional already. So I already had mood swings, and so I didn’t notice the change on my mood for four years,” she said. “At that time I was taking a type of birth control that had two of the possible three types of hormones that come in the pill. … Then I switched my birth control because of cramps, and because I wanted one that would make me skip my period. This type replaced one of the hormones with another one.”

The change had a drastic effect. Over the summer, Lett experienced immense emotional mood swings as a result of the change in her hormone balance.

“One day, John came home and I was in bed sobbing. He didn’t know what to do. I told him the doctor said it was normal, but he was still very shocked by it,” Lett said.

Although she knew that the change in pill would affect her mood and have such side effects, Lett was still surprised by the extent her personality changed for those months.

“I cried every day, I picked a fight every day. There were moments where I literally didn’t recognize myself any more. It was insane,” she said.

The effects lasted, as the doctor had warned, for three months. Lett is still on the pill now and regrets nothing.

“I mean, my cramps used to be so bad that I was on prescribed medication that would basically get me high,” she said. “My boyfriend had to check on me in his breaks between classes to make sure I was OK It was that bad.”

The pill however, cannot protect against sexually transmitted infections, one of the most serious dangers of unprotected sex.

Evans explains that a false sense of invincibility contributed to her decision to have unprotected sex, but recognizes the danger of such a mentality, especially when neither individual has been tested or even talked about getting tested.

Lett pointed out the importance of having the conversation with any sexual partner about protection and to find out about any time of STIs.

“I don’t know that everyone knows to have the conversation, but it’s so important. Even if it’s awkward, you’re looking after your sexual health,” she said. “That is so much more important than any temporary embarrassment you may feel.”