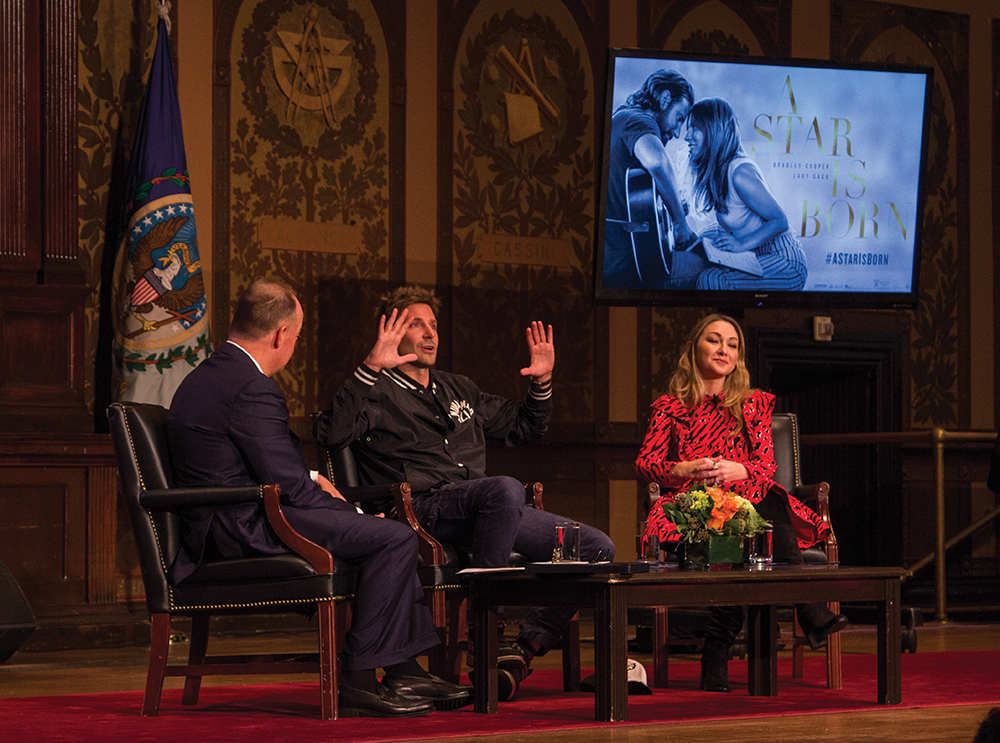 When it comes to his dreams, Bradley Cooper (COL ’97) doesn’t take no for an answer.

The actor and director attributed his success in film and life to hard work, dedication and authenticity at a discussion with Blair Rich (COL ’97), the worldwide director of marketing for Warner Bros., and Georgetown University President John J. DeGioia on Tuesday evening in a fully packed Gaston Hall.

Cooper will make his directorial debut next month with his remake of “A Star Is Born,” in which he also stars, but his dream of directing has been with him as long as he can remember. As an undergraduate, however, he didn’t disclose his directorial aspirations, saying that expressing his hopes of being an actor seemed more realistic.

“I always wanted to be a director,” Cooper said. “But I was so terrified of the prospect that I don’t think I ever even verbally said those words, I said actor instead.”

Cooper, whose film is set to release Oct. 5, said when he initially decided to shoot a third remake of the classic 1937 film of the same name, his friends tried to discourage him from doing so. But after attending a Metallica concert and feeling the energy from backstage, Cooper said his vision for the film began to solidify and he felt he had to make it.

The film follows seasoned country musician Jackson Maine, played by Cooper, as he discovers and falls in love with a struggling singer named Ally, played by Lady Gaga.

“Everybody told me not to make this movie,” Cooper said. “I just didn’t really listen to anyone. I just really kept my head down and focused the way I did when I wanted to come to this university.”

Cooper was dead set on transferring to Georgetown from Villanova University for his sophomore year after first being rejected by Georgetown out of high school. Much like his mindset for creating “A Star Is Born,” he said he ignored those who told him he shouldn’t transfer.

“The thing I learned from trying to get into this school was never to give up,” Cooper said. “Everybody told me that I couldn’t go here, that I shouldn’t be here, that I don’t deserve to be here. But I had one of the most incredible experiences of the entirety of my life.”

Connection, Cooper said, is something that is vital in making a good film, and something he kept in mind as he was working on his most recent project.

“The more personal that I can make something, the better chance I have at affecting you,” Cooper said. “I really do believe in this day and age, in this dark period in humanity that we really do all have a deep need to connect to each other.”

Cooper said he hopes to deeply affect people with “A Star Is Born,” and took time to ensure that the story felt authentic. Of the four years he spent working on the film, Cooper spent a year and a half of that time taking vocal lessons five days per week and learning guitar and piano.

Key in ensuring the authenticity of the film was having a female lead who was a singer. Lady Gaga, then, was a clear choice, Cooper said.

“There were certain things that I wanted to maintain the integrity of with this property, and there had to be a real singer, a real iconic person in the female role. I had seen Lady Gaga at a cancer benefit the previous night before I met her and she did La Vie En Rose and I was completely floored by her energy,” Cooper said. “I thought, ‘Wow, this is gonna be the one.’”

In selecting a story for his directorial debut, he was careful to choose one he felt he could relate with so that he could deeply affect the audience, Cooper said.

“I feel a tremendous amount of responsibility,” Cooper said. “The best thing I can do is come from a very deep, personal place and have a point of view about the story I want to tell.”