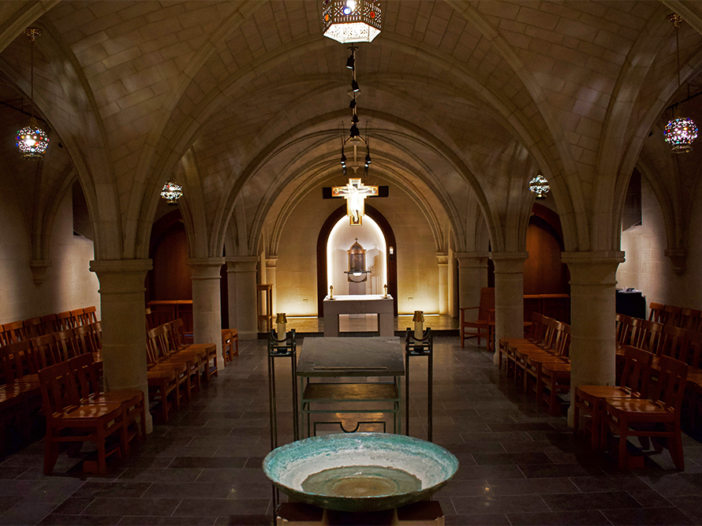 The renovated Copley Crypt Chapel of the North American Martyrs and St. William Chapel, located in Copley Hall, reopened Nov. 18 after being closed since March 2018.

The Copley Crypt Chapel is in the Copley Hall basement and St. William Chapel is located above it on the first floor. The renovations to Copley Crypt Chapel and St. William Chapel were completed in two phases: the first being exterior renovations, followed by interior upgrades. Renovations for both chapels included reconfiguring mobility ramps and restoring windows, flooring, stained glass and roofing, according to a university spokesperson. Improvements to fire hazard protection, electrical work and security were also added to the chapels.

Copley Crypt Chapel, which can only be entered through the back of Copley Hall, will be open for Orthodox Christian liturgical services and weekly Catholic mass Monday through Thursday at 10 p.m. The St. William Chapel is used for Protestant services and related activities. Both chapels were last renovated in 1995.

St. William Chapel, which can be used for Protestant weddings, has 125 chairs. Copley Crypt Chapel has seating for 65 people and is too small for weddings. However, baptisms may be held there, according to a university spokesperson.

Renovating the chapels ensured that both spaces will continue to be used for prayer services and activities, according to a university spokesperson.

“This project was critical to assure that both chapel spaces remain viable worship and gathering venues, and prevent further degradation of the building envelope and interior finishes,” a university spokesperson wrote in a statement to The Hoya.

Copley Crypt Chapel was established in 1932 in honor of eight Jesuit missionaries from France who were killed in the mid-seventeenth century, according to a university spokesperson. The stained glass windows in the chapel are dedicated to the eight murdered Jesuit missionaries. The chapel is decorated with iconography typical to both Catholic and Orthodox Christian religious worship.

“When I first came to Georgetown, I was very unsure of where I was,” Kuh said. “But the one thing that was constant for me was the fact that within sacred places there was always a place to be quiet and to recognize there was something bigger than me. So this particular place, Copley Crypt, means a lot to me.”

The completed renovations to Copley Crypt Chapel come after the Oct. 25 announcement of the spring 2020 establishment of a multi-Dharmic worship space and the opening of the new Georgetown University Masjid, a Muslim prayer space, on Aug. 30. Dahlgren Chapel, the primary space for Catholic services, was renovated in 2012.

The chapel renovations have kept important original structural elements while improving on necessary areas, according to Keh.

The renovated Copley Crypt Chapel is an inclusive space where students can gather together and take time to pray and reflect, according to Director for Catholic Life and Campus Liturgist Jim Wickman.

“My hope is that Copley Crypt Chapel will be a place on campus where any and all students find a home,” Wickman wrote in an email to The Hoya. “It is a beautiful and simple space, where one can enter, sit — even if just for a few minutes — and feel the quiet and peace. It is a place where one can pray, meditate, reflect, and feel centered once again.”