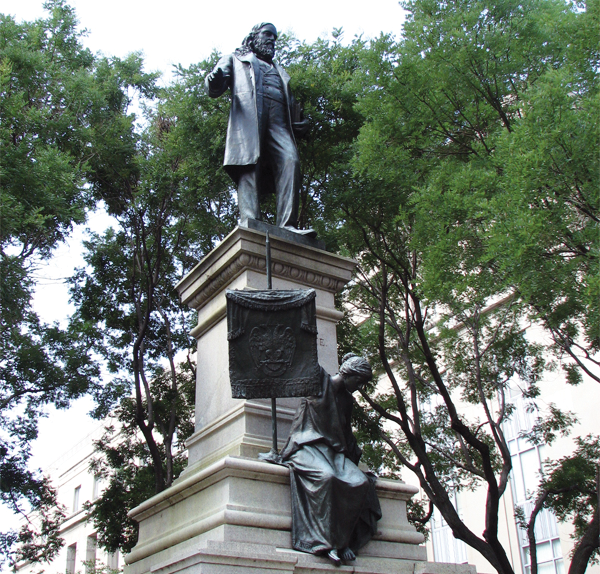 A bill proposing the construction of monuments to honor native Washingtonian women and people of color in each of Washington, D.C.’s eight wards will move forward to a public hearing on Thursday, Oct. 5, taking the next step toward becoming law.

“There is no doubt that Houston left an indelible mark on society and inspired generations of lawyers to pursue the cause of freedom and justice for the underprivileged,” McDuffie said in a press release June 27.

McDuffie, who has previously stated his support for the removal of a statue in Judiciary Square honoring Albert Pike, a Confederate general and proponent of slavery and segregation, said the bill contrasts with ongoing debates over the status of memorials to Confederate generals around the country.

“My support to remove Albert Pike’s statue should be contrasted by my effort to erect a statue of Charles Hamilton Houston and other notable women and people of color,” McDuffie wrote in an email to Ward 5 residents Aug. 24.

Protests over the Pike statue erupted in the week following violence in Charlottesville, Va., where a white nationalist rally to protest the removal of a statue of Confederate general Robert E. Lee descended into violence. Three people died in the violence’s aftermath.

“Statues are symbols that recognize great people and deeds throughout our nation’s history. The country is currently having a broad dialogue on the types of images we don’t want displayed in the public square,” White wrote in an email to The Hoya. “In the District, we have an opportunity to highlight and display the positive contributions of the people who made Washington the city that it is today.”

The bill directs the D.C. Commemorative Works Committee, an oversight group that oversees maintenance of statues, memorials and historical sites in the District, to engage community members in each of the seven wards that have not decided on a historical figure to highlight.

A spokesman for McDuffie’s office said the councilmember hopes the bill spurs construction of statues that reflect the racial and social demographics of the city.

The council is awaiting a report from the D.C. Office of Budget and Planning to analyze the financial costs of erecting new monuments, but a spokesman for McDuffie’s office said the councilmember hopes the Commemorative Works Committee is able to absorb the cost into its budget.

White said he hopes college students engage in the council’s process to pass the bill.

“We see evidence from recent events that when students engage our governments in a collective effort, they can force progress,” White wrote in an email to The Hoya. “It is important to uncover and tell the forgotten stories of the people of color and women who worked tirelessly to build their communities and make D.C. a city that welcomes all people.”

Currently the bill enjoys support from every councilmember except Brianne K. Nadeau (D-Ward 1).

Following the open hearing next week, the bill will move into the markup phase of the council’s legislative process, in which any amendments or adjustments to the legislation will be incorporated, sent back to the Committee of the Whole and voted on by the entire council.

Bowser, who has previously called for the removal of the Pike statue, must sign the bill for it to become law.