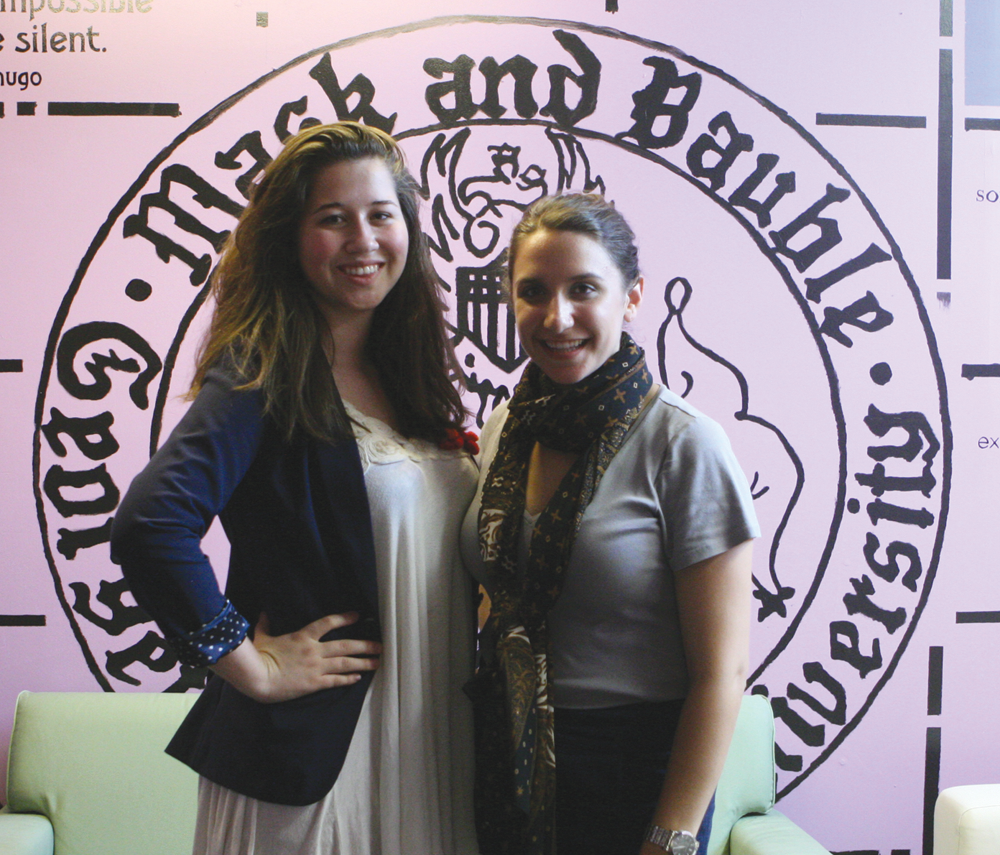 Emma Clark (SFS ’13) and Lorrie Damerau (COL ’13) were go-getters from the beginning. Active in theater throughout high school, the pair began auditioning for acting roles as soon as they arrived at Georgetown. Since then, the two have become active members of Mask and Bauble Dramatic Society. Now the associate and executive producers, Clark and Damerau are gearing up for a new season with a selection of shows that dare to amaze audiences.

EC: Freshman year I auditioned for everything right away. Auditions are the very first weekend and it’s a lot to jump into as a freshman, and it’s a bit overwhelming, but I had decided I wanted to be involved in theater my whole time here. So I auditioned and got cast in the musical that was happening that fall, “Caroline or Change.” I stayed with it because I loved the community; I loved the chance for growth and the chance to try other positions beyond just being an actor.

LD: I did theater all throughout high school and was always an actor, and I got to school and tried out for everything, same as Emma, and I didn’t get anything because I am a really bad actor. I took that as a sign that I should take a break from theater in college, but I was absolutely miserable without it. I knew someone from high school who was very involved in M&B and was really great in starting to get me involved. I did a lot of our midnight theater, and I was encouraged to apply to direct the musical my sophomore year. I actually got that and have pretty much been involved with M&B every since.

What can we look forward to this season from M&B?

LD: This year is very exciting for M&B because we actually have a season theme, “If You Dare.” All of our plays this season really speak to themes of growing and taking chances.

EC: We have four different projects going on with just M&B. Our first show is “The History Boys” by Alan Bennett. It was a Tony winner back in 2006 and was also made into a movie, so it’s pretty recognizable. That show will debut in October. Then we are going on into our One-Acts Festival, which features the work of a student playwright. We also have a student-written adaptation of “Polk Street Stories,” which is about a LGBTQ neighborhood in San Francisco, co-produced with [nomadic theatre]. And our final show is the musical “Spring Awakening,” which I think a lot of people are pretty aware of. The show deals with similar issues as “The History Boys” and bookends the season with really relatable questions for the community and where we all are in our lives right now. I think they are pretty accessible productions and are really exciting.

“Spring Awakening” covers some pretty racy material for a Catholic school, doesn’t it?

LD: We have never felt stifled by this community. We have been able to put on some really edgy work and some really amazing shows that come as a complete surprise on a Catholic campus.

EC: I think the other thing that is so important about Georgetown theater is that we really learn how to use theater to create dialogue and provoke conversation among communities. So something like “Spring Awakening” can really help create this dialogue and that’s something that’s so important to us. We are going to make sure that all the advertising material has the appropriate warning so the audience doesn’t come to see “Spring Awakening” expecting “The Sound of Music.”

What has been your favorite part of being involved with theater at Georgetown?

EC: I’m just going to go ahead and say the people and the relationships. It’s such a community when you put so many hours into something, and you are all striving toward this one goal where you all have to be so open to each other, and it’s just an amazing learning process. You create these bonds that are really hard to describe and hard to find elsewhere.

LD: One of my favorite things is seeing people grow as a result of Georgetown theater. What you can learn doing theater at Georgetown is amazing. I have learned so much about leadership and managing and working with people and different groups. I’ve loved watching the members of M&B grow a little bit as a result of every show and the people they become, and it’s really rewarding to know that our club can provide that for so many people.