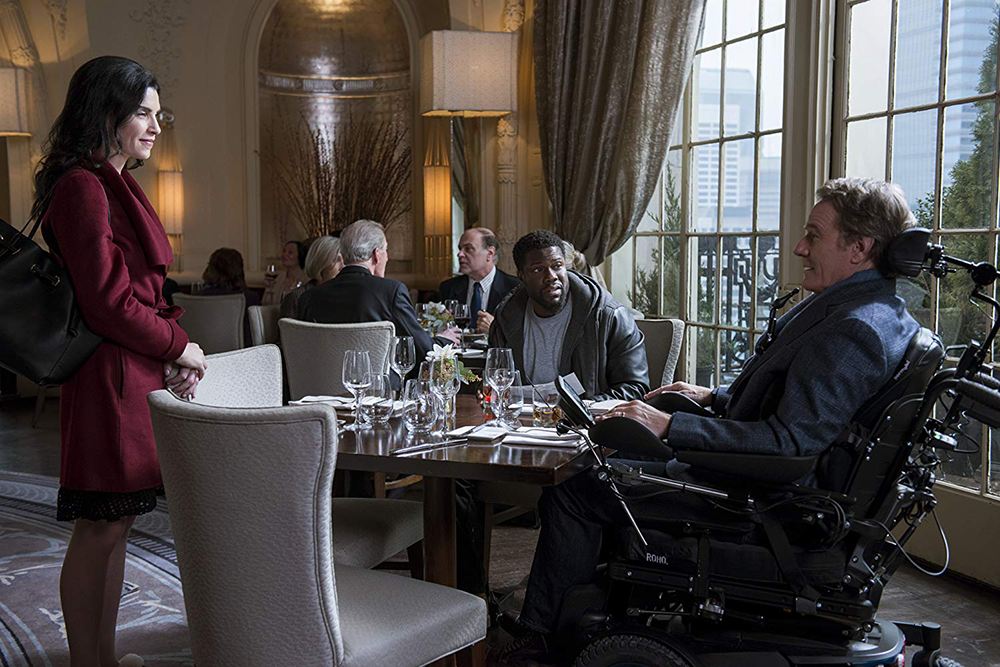 In 2012, the film “Les Intouchables,” a French box-office hit, played on screens across the United States, quickly stealing hearts and becoming the highest-ranking non-English-language movie ever released. Seven years later, an American remake of the film called “The Upside” attempted to capture the same success.

Starring Bryan Cranston and Kevin Hart, “The Upside” recreates the story of its 2012 counterpart: Cranston’s Phillip Lacasse, a wealthy quadriplegic, employs Hart’s Dell Scott, a former convict, to be his caretaker, or “life auxiliary.” The pair soon forms a humorous and heartwarming friendship that ultimately changes both of their lives.

The audience can already see the obvious Americanization of “The Upside” with the film’s location switch from Paris to New York City — a place with an oftentimes sharply visible wealth disparity that the film highlights. When Dell is paroled from prison, he begins searching for a job so that he can catch up on unpaid child support and attempt to rebuild his relationship with his son. He stops at a luxury Park Avenue apartment building for a janitor position, but by luck and inattention ends up in the penthouse awaiting an interview to be a live-in life auxiliary for Phillip.

Phillip, a billionaire seemingly accustomed to blind obedience and an infantilizing sensitivity to his disability, is attracted to Dell’s brazenness and hires him on the spot. The following events are somewhat expected: Dell’s raunchy humor and ignorance of the typical role of a caretaker bring Phillip back to life. Phillip’s personal trauma and generous paycheck make Dell contextualize his own experience and enable him to provide for his ex-wife and son, who live in a crumbling apartment in the projects.

The heart of the film has to be Cranston’s performance. He is nuanced, expressive and incredibly powerful as Phillip, particularly notable considering the limitations on physical movement — Phillip is only in control of his neck and above. Hart’s comedic timing combined with his character’s tendency to favor fun and risk over routine and obedience also brings lightness to an otherwise grave situation.

Hart’s character is arrogant and obnoxious in almost every situation. Especially in conversations related to Phillip’s disability, his raunchy comedy seems insensitive and ill-placed. This element is somewhat surprising, as Hart took the role in part to demonstrate his ability to act dramatically, but he instead forces humor into almost every scene. Despite this inconsistency, Cranston and Hart have palpable and realistic chemistry, which was central to the film.

Visually, “The Upside” is satisfying, featuring powerful shots of an urban setting as well as imperative close-ups that enabled Cranston’s expressiveness to take full effect. Subplots focusing on the musical value of Aretha Franklin and the opera also lent themselves to a vocally powerful soundtrack.

The film successfully earns its classification as a dramedy, with its believable interaction between hilarity and raw emotion. Despite its over two-hourlong run time, “The Upside” felt shorter, as the compelling chemistry between its leads establishes a quick pace.

While the film is heartwarming and feel-good, it could have been propelled to greatness. Several issues prevented the American remake from reaching its full potential. “The Upside” was earnest to a fault sometimes and had a tendency toward cliched predictability. While this tone may be potentially enjoyable to viewers, avoiding it could have made it a more substantive film. This fault was emphasized by a lack of subtlety and a tendency to caricature the differences between Hart’s and Cranston’s characters rather than to emphasize the ways in which their similarities helped them grow closer.

Despite her impressive educational background, Yvonne essentially played a glorified assistant who mainly served as a love interest to Phillip. As the only female lead, the lack of attention to her character felt particularly egregious. The role seemed to be a waste of Kidman’s tremendous acting ability on the filmmaker’s part.

Additionally, while the intention of this remake was to better suit the film toward American audiences, this goal was only meekly pursued other than a geographic relocation. Social commentaries pertinent to a U.S. audience were glaringly absent. Although discussions surrounding race relations are at the forefront of American culture today, the film chose to gloss over many conversations that could have been insightful and enlightening.

Hart’s character sometimes says pointed things, like referring to Cranston’s apartment as a “plantation,” but overall the film never spent any time examining the interaction between race and wealth or analyzing Dell’s frustration. Had this aspect of the film been more deeply explored, the film would have spoken more to an American audience and made its Americanization more necessary.

A final difficulty the film must contend with is the context of its creation and release. The rights to “Les Intouchables” were acquired by the Weinstein Company several years ago, and “The Upside” was initially released in the film festival circuit in September 2017, approximately a month before The New York Times published an article detailing decades of alleged sexual harassment committed by co-founder Harvey Weinstein. After the scandal, the film’s release, initially set for March 2018, was halted. Not only is the film therefore connected to Weinstein, but this delay also meant that the film was poised to coincide with controversy relating to Hart.

Once STX Entertainment acquired the rights to the film and a new release was set for January 2019, the film faced another dilemma: After the Dec. 4 announcement that Hart would host the Oscars, a series of homophobic tweets that he posted a decade ago — for which he initially refused to apologize — surfaced.

Soon after, Hart decided to step down from the hosting gig Dec. 6. This controversy is particularly problematic because of a lengthy and somewhat awkward scene in “The Upside” in which Dell must change Phillip’s catheter and has extreme difficulty even saying the word “penis,” a comedic choice that may now be painted as homophobic. An NYC test screening yielded a 95 percent approval rating according to Vulture, but these external factors may still affect the film’s success.

Many will likely prefer “Les Intouchables” simply because it is the original film, but despite its downfalls, “The Upside” deserves a chance to be seen and fairly judged, particularly since it features a truly spectacular performance from Cranston.