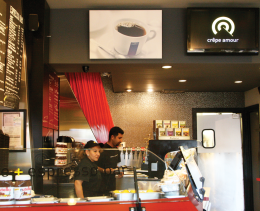 Co-owner Sri Suku said that the company decided to leave the Georgetown location, opened just over two years ago, after its landlord raised the rent for the upcoming lease renewal in May.

“[The rent] more than doubled, making it uneconomical to be here,” Suku said. “There’s a certain factor when you have to know when to walk away.”

Suku said that Good Stuff Eatery, a Capitol Hill restaurant that specializes in burgers, milkshakes and salads, will be the new occupant of the space. According to Good Stuff Eatery’s website, the restaurant will open a branch in Georgetown this spring.

Representatives could not be reached to confirm that the branch would be located in the spot vacated by Crêpe Amour.

Meanwhile, Crêpe Amour plans to open a new location in Vienna, Va., later this spring, according toSuku. In addition, the company plans to start a food truck and catering service, both operating under the name “Crêpe Love.”

The food truck will serve various locations throughout the District as well as Arlington, Fairfax, Clarendon, Tyson’s Corner and Rosslyn, Va. The owners hope to have the truck up and running in two to three weeks.

Suku added that Crêpe Amour is likely to open a new location in Georgetown and is also searching for a site in downtown D.C.

“We’re continuing to look for a location in Georgetown. As we speak, it’s not 100 percent, but if we get a good space, we’ll obviously take it,” he said. “Nothing is concrete yet. … You’ll see us popping up.”

Suku said he is grateful for the support of the surrounding neighborhood, and Georgetown students in particular, throughout Crêpe Amour’s time in the area.

“We have done phenomenally well, especially with the support of students and the community,” Sukusaid. “There’s a great synergy that we’ve had from more than a financial perspective. It’s really been a business for the community, by the community.”