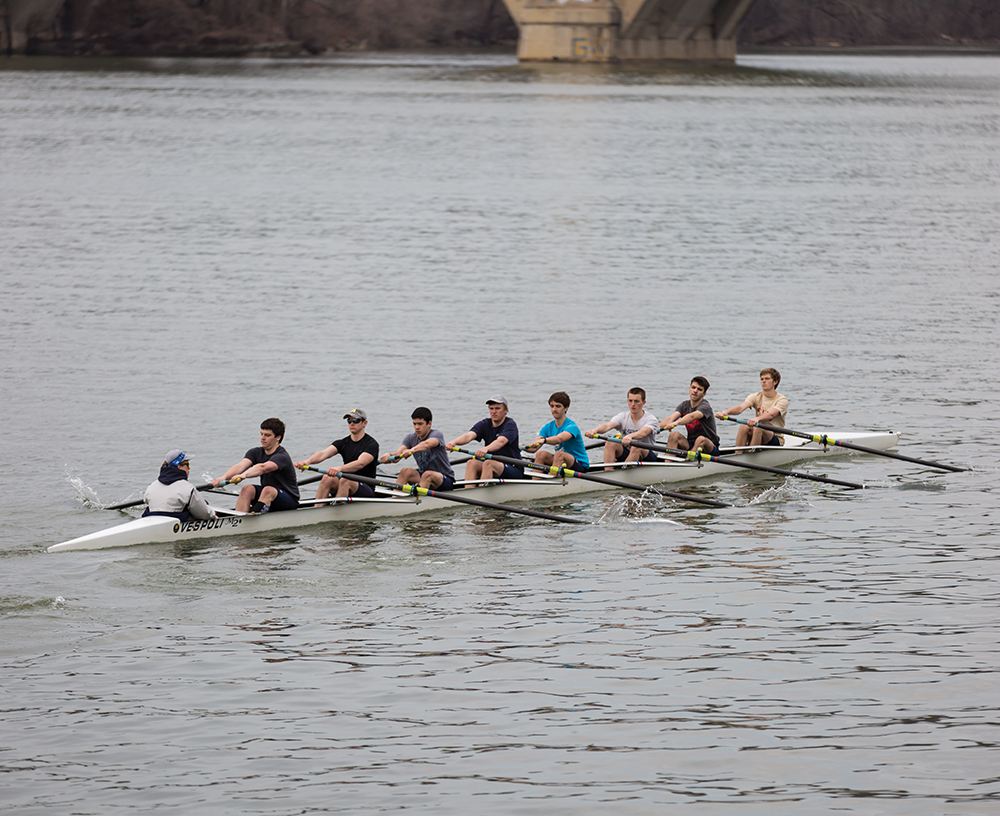 After a strange fall season that saw the closure of their boathouse because of the government shutdown and a winter hiatus, Georgetown’s men’s and women’s crew teams have taken to the water for the spring. The return of experienced veterans and an influx of freshman rowers with a semester of experience under their belts will assist the transition from fall to spring. Additionally, a series of preseason meets early in the season have helped to prepare the team for the shorter races of the spring.

The sharp winter weather that has pervaded the D.C. area deep into March was no match for last fall’s government shutdown in terms of derailing crew practices, and both the men’s and women’s teams have finally begun the shift to spring training.

“It’s an outdoor sport so you have to get used to those things in terms of the winter in the spring,” men’s Head Coach Tony Johnson said. “We didn’t get our dock back in as early as we would like and that is a problem, but some of the cold sort of comes with the territory in February and March.”

With one scrimmage completed so far, the women’s team is looking to build off of earlier gains and establish success under Head Coach Miranda Paris. Races against Bucknell on March 24 were overall a positive for the Hoyas as they took four of five events in the first spring scrimmage. It was the first time the Hoyas had rowed against the Bison as a conference foe, as Georgetown joined the Patriot League for women’s rowing last July.

“It was a great first performance. Bucknell finished second in the Patriot League last year,” Paris said. “We’re very excited to see how we’ll be competitive within that conference, and I think this shows that we started off well. There’s a long season left and there’s a long way to go, but we’ve been working very hard and I think we saw very much the results of our hard work.”

Georgetown was able to showcase a deep roster against Bucknell. Several of the Hoyas’ eight were competitive against the Bison, highlighting future potential for the team.

On the men’s side, the Hoyas were also able display their depth, with three wins in three events and an overall points victory at the Jesuit Invitational on the Cooper River in New Jersey.

“The freshman and second varsity crews did really quite well,” Johnson said. “The varsity conditions deteriorated during the regatta, so by the time varsity team was rowing conditions were not good. But they handled it all right and they won and that’s always fun and that’s the first order of business.”

Georgetown’s varsity eight finished 1.2 seconds ahead of Boston College, while the second varsity and freshman eight each finished with comfortable 15 second leads over their St. Joseph’s counterparts.

The addition of freshmen resulted in increased depth for both the men’s and women’s teams. For the women, 20 freshmen were added to the roster after rowing separately in the fall.

“We won the scrimmage very handily,” Paris said. “Everybody is a part of that, but I would say that what the freshmen are adding in particular is they’re adding depth to our program.”

For the men, freshman are rowing with the varsity team for only the second season, adding a new dynamic to the team that will require some adjusting.

“There are some new some things … that we’re working through, and I think we’re doing pretty well with it this year,” Johnson said.

For both teams, the freshmen augment a core, more experienced group of rowers. On the women’s team, some upperclassmen have been rowing at Georgetown since Paris began coaching the team three years ago.

“They’ve worked really hard to change and build different cultures here at Georgetown when they’re rowing,” Paris said. “The freshmen are helping us do that, but they’re adding to some strong leadership in the upper class.”

For the women, Georgetown’s varsity eight won two of three races, while the second and third varsity eights finished undefeated against their counterparts. While the results are not official, the finishes point toward more positive outcomes for the team as the season progresses.

“We are very excited. We think the team is going to do really well this year, but the most important thing for us is that we keep improving and if we just get a bit better every season and every year, we’ll get where we want to go,” Paris said. “It’s definitely our goal to get to the NCAA championship, and we get there by winning the conference championship. That’s definitely our goal, and we hope to get there as soon as we can.”

The men’s team will be keeping an eye on the future, with the development of young talent and the integration of freshman as important goals for the season.

The women will next race March 29 at the Class of 2006 Cup in Chapel Hill, N.C. Meanwhile, the men will next compete in a scrimmage against Princeton and Syracuse on March 29, in Princeton, N.J., with events throughout the day.