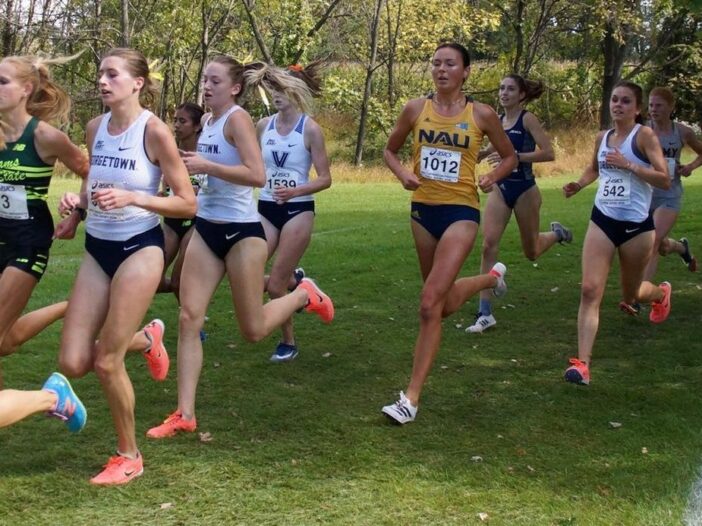 The men’s team placed 12th in a competitive field that included 10 ranked teams out of 23 total, following a third place finish in the Harry Groves Spiked Shoe Invitational at Pennsylvania State University three weeks prior. The Hoyas partook in the Blue 5 Mile Race and totalled 289 points, only beating Purdue University, Indiana University and University of Kentucky.

A bright spot of the overall poor Georgetown showing, however, was the debut of graduate student middle distance runner Matthew Young. With a time of 23:59.3, Young turned in the best time of the squad and came in 22nd place overall.

“Matt Young had an outstanding Hoya debut,” Bonsey said in an interview with The Hoya. “I’m really proud of the way he led us.”

Following Young’s top performance for the Hoyas, junior distance runner Parker Stokes secured 37th place with a time of 24:15.7 in his first race of the season. No other Hoya runner was able to crack the top 50, with the team’s next finish coming from junior middle-distance runner Sean Laidlaw clocking in at 24:39.5 in 61st place.

Bonsey acknowledged the team’s disappointing showing but will shift the team’s focus to rallying at Pre-Nationals in two weeks.

“Today certainly wasn’t what we were looking for,” Bonsey said. “I’m confident everyone will see a very different Hoya team in two weeks at Pre-Nationals.”

Strong performances from the Hoyas’ top four runners point toward the strength of this year’s team and impressive coaching from the women’s cross country Head Coach Mitchell Baker. A late finish from Dammer pushed the Hoyas to fourth place, an impressive yet still improvable performance.

Baker spoke highly of his team, yet still set his sights on what is to come later in the season.

“Those front four worked so well together and leaned into the task as a unit,” Baker said in an interview with The Hoya. “But seeing progress across the board today was definitely what we needed as we push to the second half of the season.”

The Georgetown cross country teams will race Oct. 15 at the Pre-National Meet hosted by Florida State University. The women will look to build on their successful showings, while the men’s squad has the chance to prove their resiliency and overcome their previous slow performance.