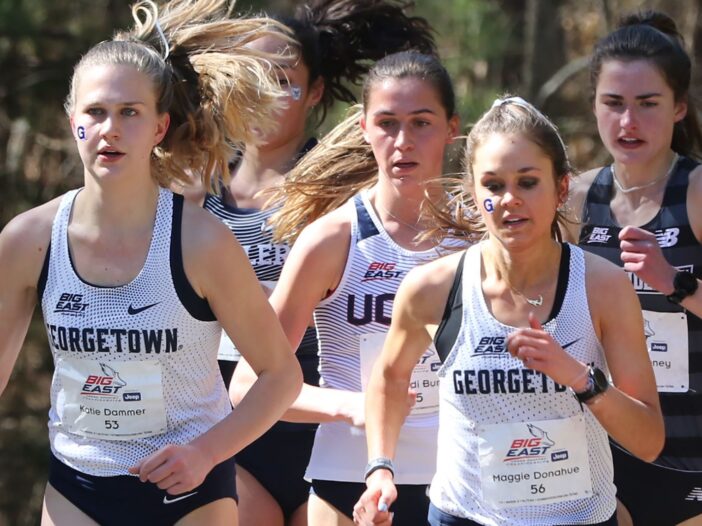 The Georgetown cross-country teams opened the weekend in commanding fashion as the women’s side captured first place and the men’s team nabbed third in the Harry Groves Spiked Shoe Invitational on Friday, Sept. 10. The event, which was hosted by Penn State, marked the beginning of the season for both squads.

In the women’s six-kilometer event, the No. 20 Hoyas were put up against a field that included three other ranked teams. Georgetown took the top prize with a score of 48 points, followed by No. 9 University of Minnesota with 51 points and No. 11 University of Michigan with 54.

Junior Maggie Donahue led the charge for the women, finishing second overall in the individual competition with a time of 20:46.2. Also finishing in the top 10 was graduate student Kiera Bothwell, who grabbed ninth place with a time of 21:02.2.

Graduate students Sara Platek and Baylee Jones finished back to back in 11th place and 12th place, respectively, with first-year Chloe Scrimgeour finishing 14th. The spread between Bothwell and Scrimgeour’s respective finishes was a tight 14.6 seconds, propelling the Hoyas to the top of the podium.

In the men’s 5.2-mile competition, junior Shea Weilbaker was Georgetown’s first finisher. Weilbaker completed the course with a time of 25:28.1, securing eighth place. Senior Quinn Nicholson was not far behind and finished ninth, posting a 25:28.7 time.

Other point-scorers for the Hoyas were junior Sean Laidlaw, who finished 12th, and graduate students Scott Johnson and Owen Ritz, who finished 14th and 24th, respectively. The team effort garnered Georgetown 67 points, landing it comfortably in third place, 26 points ahead of Minnesota, the fourth-place finisher.

Heading into the meet, both the men’s and women’s teams had been ranked in the U.S. Track & Field and Cross Country Coaches Association’s (USTFCCCA) National Coaches’ Poll, with the women coming in at No. 20 and the men ranked at No. 25.

The women’s squad will be looking to continue the momentum from the previous season, in which the team won its sixth Big East title in program history. The Hoyas seem poised to meet the competition, as they are currently the highest ranked program in the Big East, topping UConn at No. 23, Providence at No. 26 and Villanova, which is not ranked but did receive votes from the USTFCCCA.

The men, who captured second place at the Big East Championships last season, also find themselves up against ranked conference foes. Butler University is currently No. 9 and Villanova is No. 21, both above Georgetown.

Next on the schedule for both the men’s and women’s squads is the Lehigh University-hosted Paul Short Run on Oct. 1 in Bethlehem, Pa. Concurrently, a men’s delegation will make its way to Notre Dame, Ind., for the Joe Piane Invitational.