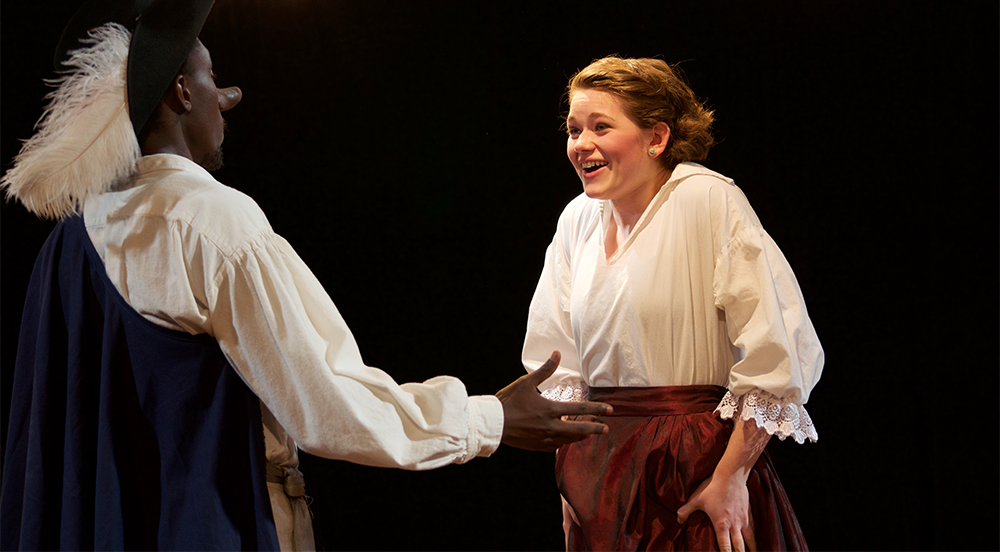 In its third event of the school year, the Mask and Bauble Dramatic Society will bring “Cyrano de Bergerac” to Poulton Hall. Veteran Georgetown actors and new performers alike have worked to stage this timeless tale, a fictionalization of the life of Hercule-Savinien Cyrano de Bergerac. Funny, sincere and as charmingly awkward as the character Cyrano himself, the play features a distinct lyrical and comedic style that still holds up nearly 120 years after the original play was written.

Cyrano, the titular poet, musician and cadet, has his sights set on the beautiful heiress Roxane. Only three things stand in his way: the amorous intentions of the powerful Count de Guiche, Roxane’s love for the new guard Christian and the peculiar enormity of his nose.

Although many characters in the story may engage in deception, the play itself is very self-aware and carefully toes the line between comedy and tragedy. It is rife with humor, and in the first five minutes the audiences is treated to at least 20 nose-related puns. Still, this light-heartedness is dampened just as quickly as it appears when the audience learns how this abnormal feature leads Cyrano to doubt his own worthiness of love.

The paradoxical emotions evoked by this storyline are emboldened by the flexible style of the script and stage direction, which include catchy songs, a Mrs. Doubtfire-esque nursemaid and a plethora of jabs at the uncomfortable fact that the main romance of the story is between cousins — second cousins, as Cyrano repeatedly points out. The tunes are charming and lovable, even with their crude subject manner and suggestive poses.

Mask and Bauble’s adapted performance isn’t a typical rendition of “Cyrano.” Mask and Bauble Director Nick Norberg chose this version, adapted by Aaron Posner and Michael Hollinger, because of how diligently Posner and Holinger worked to make the 19th century humor more accessible.

Norberg recalled seeing the play in high school and noting its similarities with another famous play about love.

“[It was] a funnier, more interesting, all around better Romeo and Juliet story,” Norberg said.

Ludtke and Norberg, both aware of the show’s potential to seem outdated, said they are especially eager to emphasize the more modern aspects of the story, which explores the complexities of personal relationships and affection, as well as the effects of different kinds of insecurities.

“[It’s] a pretty timeless message that is always nice to be reminded of,” Ludtke said.

Norberg said he sees value in a message beyond romantic clichés.

“Cyrano is [made up of] characters who go about their daily lives wearing masks,” Norberg said. “They have a perfect exterior that they think the world wants to see.” One of the first steps in removing our facades, he argues, is to learn to laugh at them and at ourselves.

The cast and crew of “Cyrano” are delightfully skilled at expressing the emotional range of the story. With four cast members who have never acted at Georgetown, two of whom had never been in any play at all, Ludtke and Norberg were understandably cautious. However, both came to embrace the fresh take it brought to the script.

“We got to work through a lot of disagreements and questions that people had with the scripts and with their characters,” Norberg said, adding that he was reassured by the cast’s questioning and critique and felt that the characterization benefitted.

Ludtke agreed. “It’s one of the most well-rounded pieces of theater I’ve seen in a very long time,” Ludtke said.

The play will run for the next two weeks, and tickets can be purchased online and in the Davis Performing Arts Center Box Office.