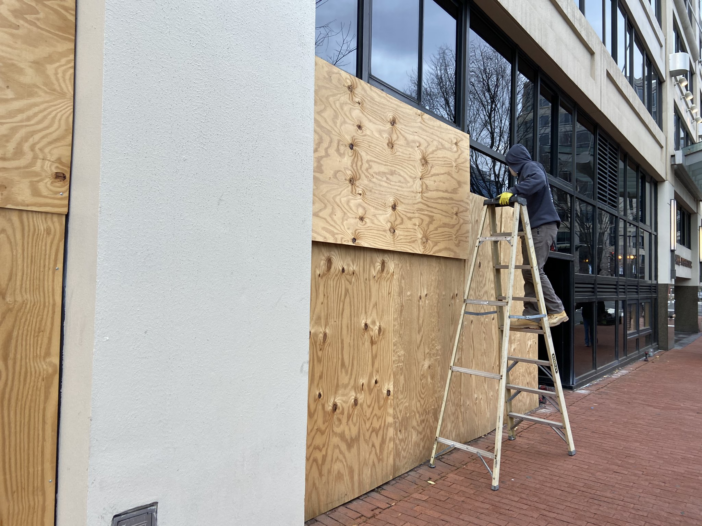 Businesses began putting up boards prior to the Nov. 7 election in anticipation of possible protests and disruption, the majority of which were removed after minimal demonstration activity. Businesses replaced boards in the wake of the Jan. 6 insurrection at the United States Capitol.

Boarded-up storefronts have only added to the financial stress caused by the COVID-19 pandemic, according to Bruce Klores, who owns GCDC Grilled Cheese Bar, a fast-casual restaurant on Pennsylvania Avenue.

“COVID was practically a death knell for lots and lots of particularly small restaurant businesses,” Klores said in a phone interview with The Hoya. “There’s not a single restaurant that’s doing anywhere near the amount of sales that they’re doing the year before. We’re off probably 75%. Many, many restaurants have closed.”

Numerous M Street storefronts, including the America Eats Tavern, Le Pain Quotidien and Peet’s Coffee, have closed since the start of the pandemic.

Downtown businesses, which faced the brunt of the impact because of their close proximity to the White House and the Capitol, have had to adapt quickly in order to stay afloat, according to Klores.

“Their client base is gone. No tourists, no office workers,” Klores said. “They’re all gone. That’s like there’s been an atomic bomb that has been dropped on our neighborhood.”

Pandemic-related struggles were further compounded by a lack of communication from city leadership during last month’s unrest, according to Elliot Spaisman, founder of Astro Doughnuts and Fried Chicken, a grab-and-go restaurant on G Street.

“With all the different forms of protest, that really hurts the business,” Spaisman said in a phone interview with The Hoya. “During inauguration, streets were closed pretty much for 10 days, but they weren’t really telling us where they were closed until they were finally closed and nobody could get down here. The same thing happened this summer, this fall. We’re always the last to know, and it’s hard to run a business that way.”

As businesses struggle to keep their doors open, many have covered their windows with plywood boards. While business owners and landlords originally boarded up their stores to protect their storefronts from potential threats of violence during the election and inauguration, the cost to take the boards down quickly became another burden, especially for stores that permanently shut down, according to Spaisman.

“Most of the stores I see with boards are temporarily or permanently closed,” Spaisman said. “And that logic, I get it, because they don’t know what’s coming next month or next week. Why keep taking them up and down if they’re not even open?”

After the insurrection at the Capitol, Mayor Muriel Bowser (D) urged the city to reopen.

“DC, let go of your boards. If you know a business that still has boards up, please remind them to pull them down,” Bowser wrote in a Jan. 27 tweet.

Stores that are keeping their boards up may be damaging the city’s economy more, according to Spaisman.

“Having your neighborhoods boarded up, it just doesn’t draw people around,” Spaisman said. “When businesses around you are open, the area becomes more vibrant. When boards are up, it’s just not welcoming for the city. I hope everyone listens and thinks about [Mayor Bowser’s tweet] and does it.”

The city’s leadership has attempted to assist businesses throughout the pandemic and political unrest, according to Klores. Efforts have included modifying zoning laws to allow for more seating outside, providing funding programs to give small businesses and restaurants money for outdoor dining equipment and allowing restaurants to serve to-go alcohol.

In order to expedite the removal of boards, the city should consider subsidizing the removal process, according to Spaisman.

“When you put the boards up, they’re not as easy to come down,” Spaisman said. “If a business closes and doesn’t want to take them down for that reason, either temporarily or permanently, if the D.C. government wants them down, they should absolutely take them down.”

Despite the lingering boards, D.C. is moving in the right direction, according to Klores.

“North of the White House, there’s still some boarded-up stuff, but it’s been much, much better,” Klores said. “There’s been a really nice, refreshing air of calm since the day after the inauguration. I think that in the city, we’ve learned our lesson and that we understand now to take threats seriously and create perimeters to try to keep the downtown business safer.”