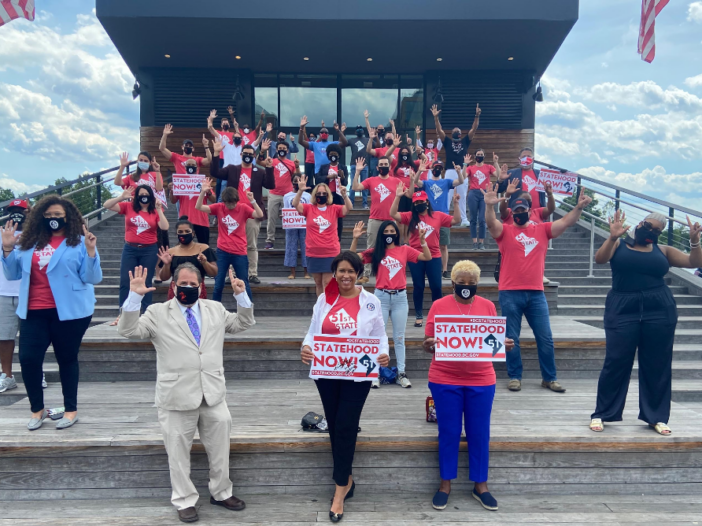 H.R. 51, the Washington, D.C. Admission Act, was passed in a 216-208 vote. The bill, however, needs support from 60 senators to advance past the filibuster. Democrats currently have the majority in the Senate with 50 senators and Vice President Kamala Harris, who could cast a tiebreaker vote.

The current Democratic majority in both chambers of Congress is an opportunity for action, according to Delegate to the U.S. House of Representatives Eleanor Holmes Norton (D-D.C.).

“Now that I’m in the majority, the first thing I’ve done is to get the D.C. statehood bill passed, and, in fact, we now have the majority in the Senate and the presidency,” Norton said in a phone interview with The Hoya. “I’m trying to make hay while the sun shines.”

Norton introduced H.R. 51 to the 117th Congress on Jan. 4. Norton has advocated for D.C. statehood since the first time such a bill went to the House in 1993.

The Biden administration formally backed H.R. 51 on April 20. The more than 700,000 people in D.C. should have equal representation in the U.S. democracy, according to a statement from the U.S. Office of Management and Budget.

“Washington, D.C. has a robust economy, a rich culture, and a diverse population of Americans from all walks of life who are entitled to full and equal participation in our democracy,” the statement reads.

The bill would make the District the nation’s 51st state, renaming it “Douglass Commonwealth” in honor of Frederick Douglass, the notable writer and abolitionist. An area of two square miles including the Capitol and the White House would remain the federal district and would not be a part of the Douglass Commonwealth.

There is a real possibility D.C. statehood will become reality, according to Norton.

“I’m feeling very optimistic with the support of the president, a very strong statement of support, which means that we have an extra two strong hands, or I always call many hands, from the White House helping us to get this done,” Norton said.

Georgetown University, as a part of the D.C. community of elected officials, leaders and residents, is in full support of D.C. statehood and equal voting representation, according to President John J. DeGioia (CAS ’79, GRD ’95).

“We are thankful for the efforts and advocacy that helped to make this historic vote possible and will continue to support and advocate alongside Congresswoman Eleanor Holmes Norton and our city leaders to achieve full representation for Washington, D.C.,” DeGioia wrote in an email to The Hoya.

Last week’s vote marks the second time the House passed a D.C. statehood bill. In June 2020, the D.C. statehood bill died in the Senate despite House support, since the Senate requires the support of 60 members to move to a vote. The Senate may pose a similar challenge to the 2021 legislation: Support for H.R. 51 is mostly divided along partisan lines and the bill will require some Republican support in the Senate to pass.

Statehood advocates note D.C. has a larger population than Wyoming or Vermont but lacks congressional voting power. The District also pays more in federal taxes per capita than any state.

In pushing for statehood, D.C. residents are demanding their rights as guaranteed by the Constitution, according to D.C. Mayor Muriel Bowser (D).

“The issue of taxation without representation was settled more than 200 years ago through the Declaration of Independence, and disenfranchising more than 700,000 taxpaying Americans is wrong no matter our politics or demographics,” Bowser said in a June 26 press release. “Who we elect is our business, and denying us statehood based on who we might send to Congress is both undemocratic and un-American.”

Granting D.C. statehood would also address a variety of other injustices, according to the Georgetown University College Democrats Executive Board.

“Statehood would resolve inequities in federal funding for disaster relief, give DC residents power over our own city budget, help reform the criminal justice system and empower local rather than federal judges, give DC residents fair voting representation in Congress, and more,” the GUCD Executive Board wrote in an email to The Hoya. “Statehood is long overdue and we call upon all Georgetown students to commit themselves to this exceptionally important cause.”

Constituents from other states can help make D.C. statehood a reality by reaching out to their elected officials, according to Norton.

“Those who live in other states can help a lot by writing their senators and saying, ‘Support D.C. statehood,’” Norton said.