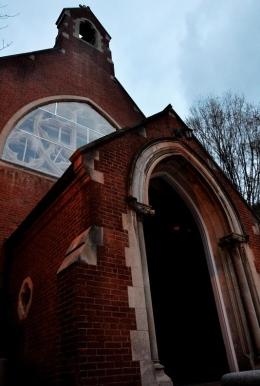 While outside renovations to Dahlgren Chapel are on schedule for a fall 2012 completion, planned interior renovations cannot begin until the university raises over $1 million in additional funds, according to Vice President for Mission and Ministry Fr. Kevin O’Brien, S.J.

O’Brien and representatives from Kerns Group Architects updated the campus community on the renovations’ progress in a meeting held in the chapel Thursday afternoon.

According to O’Brien, the first stage of the renovations, which focused on the chapel’s exterior and foundation, will be finished by the start of the 2012-2013 academic year. The final portion of the exterior renovations was scheduled for this summer because it requires the use of heavy and loud machinery.

Dahlgren’s stained glass windows, which were removed for protection and cleaning earlier this year, should be replaced at some point in the fall, O’Brien said.

Once exterior updates are finished, attention will turn to renovating the building’s interior, which is estimated to cost $2.1 million. According to O’Brien, the Office of Mission and Ministry has raised about half the total needed.

Currently, the university is seeking a donor to sponsor the purchase of a new organ, which will be moved to a space behind the altar. However, the size and shape of the new organ can be confirmed only once a donor is secured, since the funds raised will impact the size and quality of the new organ.

“So much is dependent on moving the organ,” O’Brien said.

The plans also call for renovations to the altar platform as well as the relocation of the chapel’s tabernacle and stations of the cross, currently located in the building’s transepts. The renovations and reconfigurations will increase the number of seats in the chapel from 281 to 318.

According to O’Brien, a timeline for the interior renovations will not be drafted until the necessary additional funds are raised.