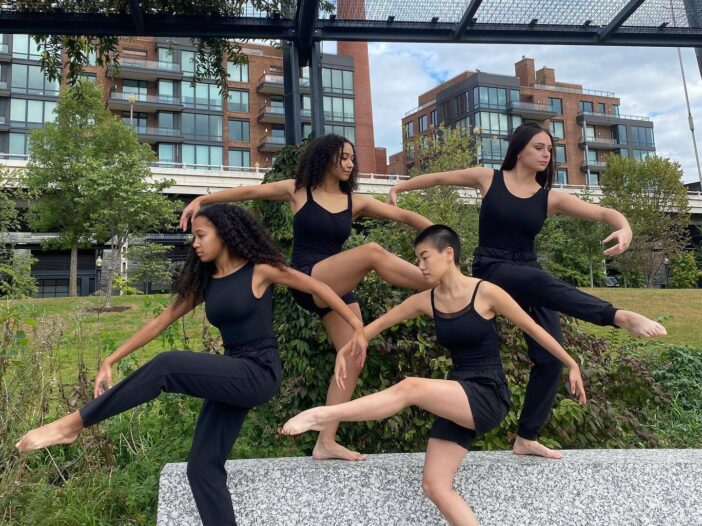 The Georgetown University Dance Company (GUDC) performed their annual showcase in person for the first time since the start of the COVID-19 pandemic.

The performance was held in the Gonda Theatre in the Davis Performing Arts Center on Feb. 18 and 19 and featured pieces choreographed by members of the company, guest choreographer Shaun Boyle D’Arcy and Faculty Artistic Director Raina Lucas. This year’s showcase was entitled “re_calibration.”

Despite having to adjust to changing protocols multiple times throughout the season and adapting to a last-minute casting change when a student in the production tested positive for COVID-19 two days before the company’s first performance, the show went on.

Lucas said she is proud of the work the company has achieved despite the turbulent season.

“I am so proud of the students, and honestly it was surreal to be back in the Gonda Theatre,” Lucas said in an interview with The Hoya. “We’ve been through a lot of challenges as a company, so I’m just really happy we had the chance to return to the stage with a live, in-person audience.”

Student Artistic Director Michelle Du (COL ’22) said the shows were a success as the theater was sold out both nights.

“We had to cope with a lot of uncertainties with the virtual beginning to the semester, but I think the company worked really hard as a team,” Du said in an interview with The Hoya. “We were able to pull together with the support of the department, our tech crew and everyone who was involved in the production, and I think it was one of our most successful productions yet.”

The show, which saw around 500 attendees each night, featured performances from 20 dancers over 10 pieces.

Cate Walter (COL ’25) said the company was about to start its usual run-through of the showcase when the student received her positive test result.

“We just had a company meeting before rehearsal and talked about what the plan was, and we were all required to get tested Thursday and Friday,” Walter said in an interview with The Hoya. “She was at rehearsal and everyone’s faces just dropped — we were all just like, ‘What are we going to do?’”

But the company adapted well, changing scenes that the student was meant to be in, according to Co-Production Director Christina Dropulic (COL ’22).

“It was a shock and there were definitely some nerves, but I think that, as usual, we persevered very well through it,” Dropulic said. “Everything ended up looking okay, and that’s a testament to how adaptable this company is, especially after our COVID year and how flexible we had to be during that time.”

The company, which began rehearsal for the showcase in September, was forced to operate virtually for a week in the fall following a COVID-19 exposure during the first two weeks of the spring semester when the university operated virtually, Dropulic said.

“That first week back in the studio, we were definitely all a little bit nervous to see if what we think we created we actually had,” Peacock said in an interview with The Hoya. “It ended up being definitely different than I anticipated but in a good way — I think it gave the cast members an opportunity to put a little more of themselves in the dance than they could have otherwise.”

Dropulic said while the first show back was nerve-racking, it was also a bittersweet swan song to the four years she has spent with the company.

“It was a lot of nerves to perform well and present myself well after having missed the stage for a while, but also just the biggest happiness to be back with my company and be back doing what I love,” Dropulic said. “Performing is really one of the primary reasons why I’m a part of GUDC and why I love to dance.”