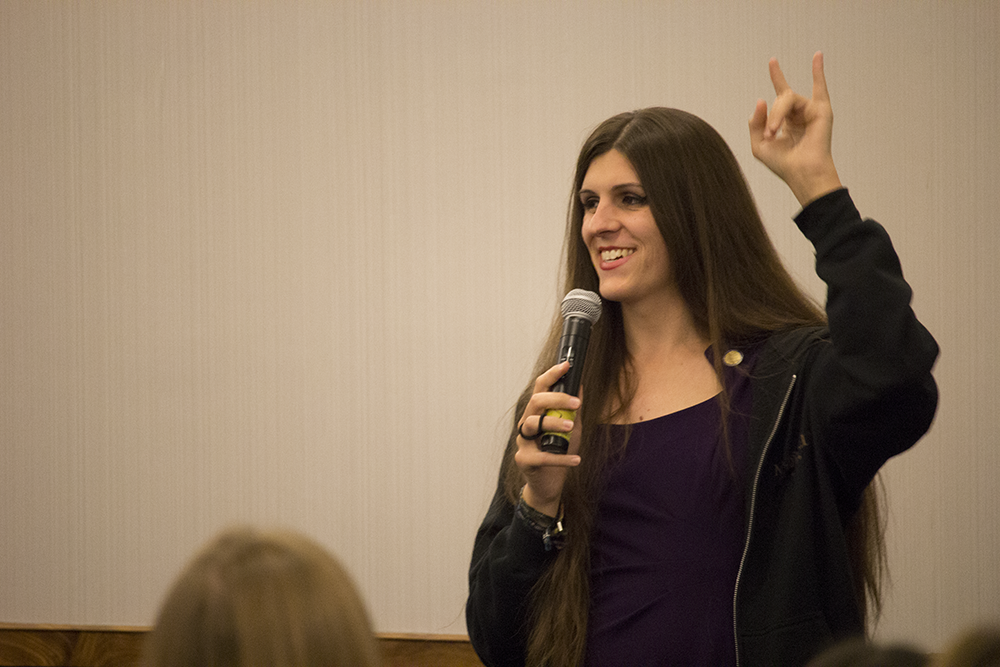 The current federal government’s policies threaten the rights of transgender people, Del. Danica Roem (D-District 13) of the Virginia House of Delegates said at an event in the Healey Family Student Center Social Room on Oct. 30.

Roem ran for the Virginia House of Delegates in 2017, after working as a journalist for almost 11 years. She defeated 13-term incumbent Del. Robert G. Marshall (R-District 13), the sponsor of a bill that garnered controversy, which would require students to use the bathroom of their biological sex.

With her 2017 victory, Roem became the first openly transgender person to be elected to and hold office in any U.S. state legislature. Stacie Laughton, who is also a transgender woman, was elected to the New Hampshire House of Representatives in 2012 but did not take office because she had not disclosed that she had been convicted of a felony.

Roem voiced her concerns about transgender rights under the current government at the event Tuesday. Grassroots mobilization and participation in local government are ways to combat such concerns, according to Roem.

Roem attributes some of her success to this type of grassroots mobilization, including canvassing by volunteers and small donations.

Roem is hopeful students will contribute to their local and national dialogues by holding their representatives accountable and running for office themselves.

“If you can’t find someone who shares your values, well, guess what?” Roem said. “This is America. Go grab a clipboard. Go collect some ballot signatures. Get yourself on the ballot and go be that person that you think that you don’t have. Because maybe you don’t. Or maybe some people do inspire you, but the people who represent you don’t.”

Roem decided to run, despite her unemployment and lack of health insurance, to demonstrate that the government is not solely the domain of the rich and powerful, she said. Voters appreciate authenticity from a candidate, according to Roem.

“If 2016 taught us anything, it is that the perception of authenticity, whether or not it is grounded in reality, is extremely important, and it is what people in our voting populus want from their elected officeholders and want from their candidates,” Roem said. “So the way that I decided to launch the campaign was to start being myself.”

Roem sought to run a campaign based on policy issues like transportation, education and Medicaid expansion, rather than focusing solely on her identity, she said.

Her background as a journalist prepared her to enter politics by teaching her to ask questions and to listen, Roem said.

“I love reporting the news, that’s why I did it for 10 1/2 years,” Roem said. “I love speaking truth to power; I love being the person who holds politicians’ feet to the fire. I love that idea that no one in elected office can look at me as a pushover, and that they have to answer my questions.”

She is hopeful her own experience will inspire college students to share their ideas and participate in democracy, Roem said.

“I’m here to tell you today that this is your America too. And no matter what you look like, where you come for, how you worship if you do, or who you love, that if you’ve got good ideas, if you’re well-qualified, then bring your ideas to the table,” Roem said. “Because this is your Georgetown too. This is your Washington, D.C., too. This is your country too. And it’s time for you to run it. And don’t think that it’s not just because you’re in college.”