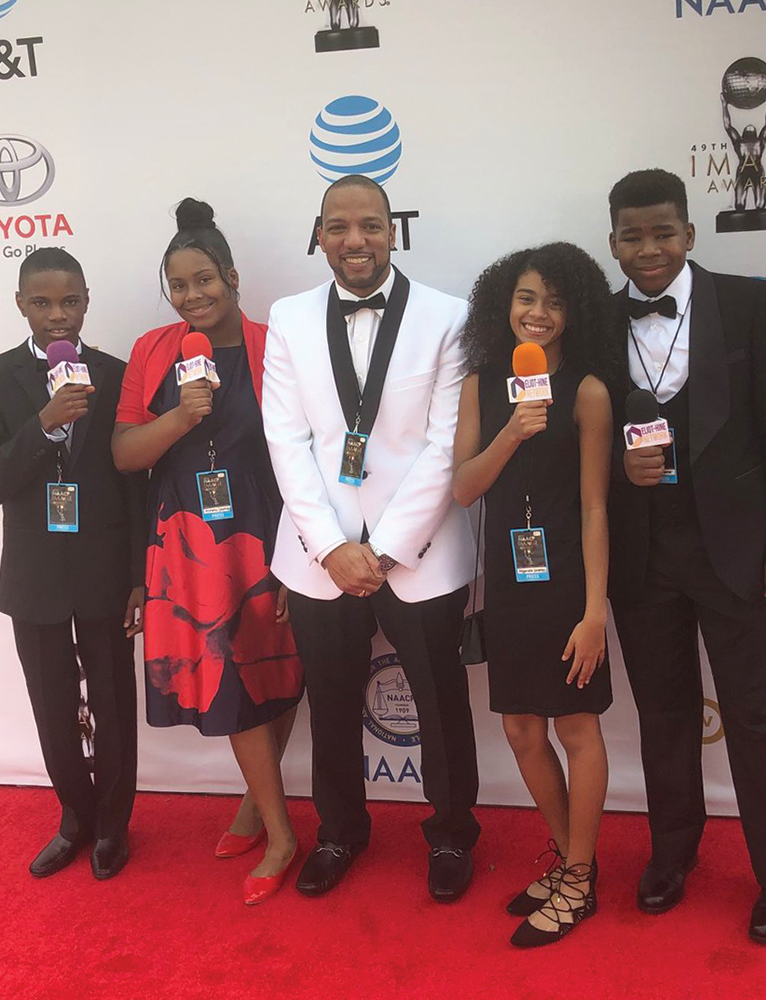 The students acted as news correspondents at the award ceremony, where people of color are celebrated for outstanding achievements in television, film and music. The awards were first presented in 1967 and first nationally televised in 1994.

The student radio program, which launched in 2012, is mentored by Mandrell Birks, the host of a D.C.-based domestic violence radio program called “The Sighlent Storm.” Birks began teaching a radio production class at Eliot-Hine in 2012, which culminated in a joint radio-television broadcast program a few years later.

Birks collaborated with TV One, Southwest Airlines, The Washington Teachers Union, Clarke & Associates and the Eliot-Hine community to cover the expenses and logistics for the trip. TV One offered Birks press credentials to cover the event, which the station aired a live broadcast of Jan. 15.

Eliot-Hine’s radio program makes it distinct in the District as the only public school with such a program. Councilmember Charles Allen (D-Ward 6) commended the school for providing the students with an opportunity to explore media arts.

“I’ve been a really big fan of this program for quite some time because of the experience it provides for kids,” Allen said.

Allen said he is proud of students’ progress in the years since the program’s conception, describing the students as having started with “bare-bones equipment” and transforming the production into a  “very professional production.”

However, in past years the school has suffered from declining facilities and low test performance. In an April 2016 article from Greater Greater Washington, a volunteer-based news source that advocates for improving the quality of life in D.C., Virginia and Maryland, Eliot-Hine was described as “falling apart,” citing faulty toilets, heating units and windows, among other issues.

Allen said that the most recent invitation to attend the NAACP Awards is a measure of the program’s success and a reflection of all the help the students have had along the way.

“With a lot of help and support, they were able to make it happen,” Allen said.

According to Allen, the D.C. local government is investing in the improvement of schools across Ward 6, including Eliot-Hine.

“We’ve spent — across all the middle schools in Ward 6 — a bit over $100 million dollars into rebuilding the schools, and Eliot-Hine is one of them,” Allen said. “That’s happened in the last couple of years, and we’re excited about what’s to come here in rebuilding.”

However, Allen said the radio show has been a constant positive factor at the school even before the D.C. government began the rebuilding effort, and that it creates a draw to the school.

“As a middle school student? You can’t learn how to run a board, you’re not going to get to be in front of a camera interviewing the mayor, elected officials, celebrities,” Allen said. “You don’t get to do that at every school. But at Eliot-Hine you do, and so it’s a great program and one that I’m really proud to support.”