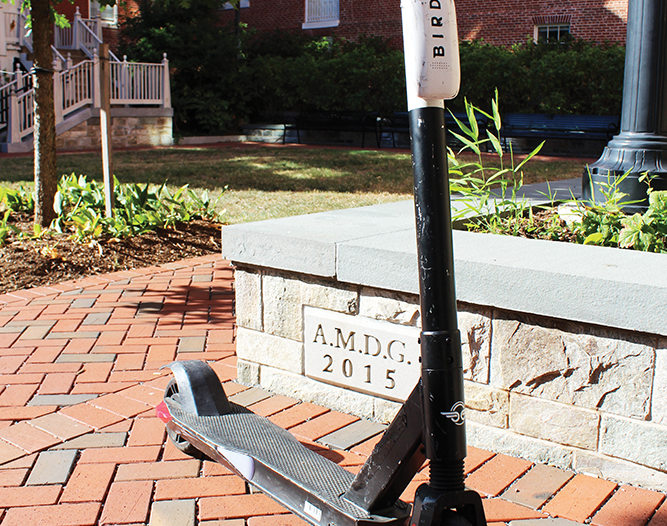 Mark Camilli (COL ’19) was returning from an ESCAPE trip in February 2019 when he sustained an injury that changed his last semester at Georgetown University.

He was riding an electric scooter while carrying a backpack and duffel bag past the Southwest Quadrangle when he lost his balance trying to slow the scooter down to adjust the bag.

“It was honestly one of the scariest experiences of my life,” Camilli said. “As I fell face first, I could literally hear my tooth shattering. It felt like there was sand in my mouth.”

Camilli fractured both his arms and afterward needed surgery on his right arm and physical therapy. He still ended up dropping two of his classes due to the weeks when he was unable to write.

“I still to this day cannot fully extend my right arm,” Camilli said. “It will probably bother me for the rest of my life.”

Camilli is just one of thousands of people who have been injured on electric scooters since they were introduced in 2017. Scooters, which have rapidly risen in popularity, pose dangers to riders and create problems with accessibility as they enter a landscape clearly not designed with them in mind.

As more companies roll out scooter options, many cities, including Washington, D.C., have found themselves scrambling to find ways to regulate them.

The District Department of Transportation recently extended the comment period on its proposed regulations for electric scooters in 2020 to Oct. 30. While the proposed rules would provide new limitations to usage to address concerns about safety and accessibility, they would also dramatically expand the presence of scooters by the thousands within the district.

Since scooters rose to prominence in D.C. following their introduction in 2017, a growing number of companies have placed their scooters on and off campus as a form of last-mile transportation, intended for short trips.

Currently, eight companies have scooters available in the District: Bird, Bolt, Jump, Lime, Lyft, Razor, Skip and Spin. Each has about 600 to 700 listed scooters in operation across the whole District, according to the DDOT.

Because of the DDOT’s proposed changes to regulations, the number of scooters allowed in D.C. could nearly double to 10,000 by January, and potentially 20,000 thousand by June. Though the number of scooter operators will be limited to four, each service that receives a permit can expand its fleet to 2020 under these regulations. The operators can submit petitions to expand on a semiannual basis subject to review by DDOT based on past performance.

Though scooter operators have been expanding exponentially, the rollout for many of these services has not always run smoothly. A report recently found that nationally eight people have died because of accidents on electric scooters and an additional 1,500 individuals have been injured. Many of the accidents were caused in part by roads with no clear spaces for scooters as well as general confusion about what traffic laws apply to scooters.

The Georgetown area is specifically difficult for scooter users to navigate safely, according to Camilli.

“The roads are cobblestone for a bunch of different streets, so if you’re on the road it’s way too bumpy, and then, there’s not necessarily always a lane for you to be in,” Camilli said.

In 2018, a man’s fatal collision with an SUV while riding a Lime scooter in the District prompted D.C. Councilmember Mary Cheh’s (D-Ward 3) call for greater regulation of the industry and greater education for scooter users.

“One of the problems that I see with this proliferation of new means of getting around is that there’s an education and cultural issue,” Cheh said in an interview with The Hoya.

Scooters do not simply present risks to riders; parking has raised problems in terms of city accessibility, especially to people with disabilities.

To avoid creating obstacles, scooter users are required to park their scooters upright, with at least 5 feet of walkway left for others traveling on the sidewalk. They also may not be parked in any place that would impede access to public or private property, according to the DDOT permit required for scooter companies.

These kinds of parking violations are common, Cheh said.

“I get complaints all the time from people around the District saying that scooters are being strewn across sidewalks,” Cheh said.

Improper parking can pose serious difficulties to those with disabilities, according to Anna Landre (SFS ’21), Georgetown Disability Alliance president and a wheelchair user.

“Oftentimes, scooters are left in locations that block pedestrian right-of-way and constitute a barrier for disabled people. This is especially true in Georgetown, where our sidewalks are already narrower than most other areas of DC,” Landre wrote in an email to The Hoya. “Personally, I’ve had the path in front of my apartment blocked by scooters on several occasions, preventing me from getting home.”

Scooter companies have a responsibility to increase awareness of how scooter usage and improper parking can impact those with disabilities, Landre wrote.

“We need to increase education around this issue among those who use scooters,” Landre wrote. “This is going to necessitate the cooperation of scooter companies, who in most cases have shown a clear lack of interest in making themselves responsible for their products.”

In addition to the proposed regulations, the District also plans to create curbside parking to help limit improperly parked scooters, according to The Washington Post.

The DDOT rules also require that scooters be available across D.C. so that a variety of residents can take advantage of them. Each company has a low-income customer plan that provides options for individuals making less than $24,980 per year and families of four with less than $51,500 in household income, according to the DDOT.

One of the important potential gains of low-cost transportation like dockless scooters is providing low-income residents with new options for transportation through these plans, according to Cheh.

“I want to make sure that scooters are going to be made available across the District,” Cheh said.  “Not just in special places.”

Yet problems of socioeconomic disparities persist. Because the scooters are dockless, they can be deposited by the user at any point and are often found with much greater density outside of low-income areas. Even in terms of regulation, actual requirements ask that only 1% of each company’s fleet be placed in each of D.C.’s eight wards by 6 a.m. each morning, according to Cheh.

“Since they’re all allowed to have 600, that would be just six for each ward,” Cheh said. “I want to increase that pretty substantially because I don’t think it’s adequate.”

The DDOT’s new proposal for 2020 rules on scooter use, open for comment until October’s end, would increase this limit, but only up to 20 total per ward, and would include more flexibility with hours of placement, according to documents released by the department.

As lawmakers develop new regulations to accommodate for the rising trend, part of the danger of scooters is the lack of knowledge of the regulations that attend the use of the devices.

In the central business district of D.C., scooters cannot be ridden on sidewalks at all, and many cities have set the speed limit at 15 mph, subject to a fine of $25. These rules are frequently broken, however, according to Cheh.

“Currently, they’re not allowed to go on the sidewalk in the central business district,” Cheh said. “But you don’t see anybody adhering to that.”

Although on many scooters these regulations are prominently marked, it is often not an effective deterrent to breaking these rules. Commonly flouted rules include the requirement that riders be at least 18 and the rule against multiple passengers.

“I see more than one person on a scooter; I see kids on a scooter, and none of that is allowed but there’s really no enforcement,” Cheh said.

Lack of knowledge of safety regulations and options for scooters ultimately, however, falls outside the legal liability of companies like Bird or LimeBike, and many insurance policies will not cover injuries from accidents on scooters.

With hundreds of scooters, D.C. remains a focal point for the forthcoming regulations that include capping the speed limits on scooters and a proposed regulation that would prohibit scooter usage between 10 p.m. and 4 a.m. Some cities have implemented more severe regulations, with the mayor of Nashville requesting that legislation be proposed banning electric scooters entirely as backlash begins to mount against the vehicles.

Though concerned about the dangers that unclear regulations pose, Cheh still supports their introduction to metropolitan areas, according to a press release.

“Electric scooters and battery-assisted bicycles produce multiple benefits for the District,” Cheh said. “But, because this technology is relatively new, we don’t have a safe electric scooter culture — resulting in many users neglecting to follow important safety rules.”

However, lawmakers considering scooter regulation don’t have access to reliable data on these metrics, according to Cheh.

“There’s also an issue about data: to exercise oversight we need to have accurate data about incidents and injuries,” Cheh said.

The proposed regulations will require operators to submit monthly data on scooter usage and parking to help account for the current gaps in understanding.

The Committee on Transportation and the Environment is set to hold a hearing Nov. 4 focusing solely on scooters, according to Cheh, as law makers continue to figure out the appropriate level of regulation on electric scooters.

“I think there is a way forward,” Cheh said. “I don’t think that we should plan on banning scooters, but obviously there are things that have to be attended to.”