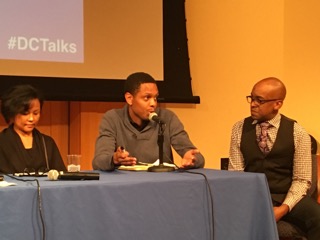 The capital city is not just a political hub, but also a thriving center of arts, music and journalism. The D.C. Talks conference, hosted by the Georgetown University Music Program in partnership with the Music Policy Forum, Listen Local First and 202Creates on Oct. 28 in the Lohrfink Auditorium, sought to spark conversation about the changing relationship between arts and the media, specifically in the District.

The event brought together a wide array of professionals from across the country to discuss the role of the public sector in the rapidly expanding media landscape. The various panelists and presenters spoke about the intersection of various arts communities and how like-minded creators can benefit from integrating strategies and networks.

Following an introduction from event organizers Anna Celenza, Thomas E. Caestecker and Michael Bracy (COL ’90), Jax Deluca, media arts director for the National Endowment for the Arts, discussed the results of an NEA and International Documentary Association report that outlined key issues and recommendations to improve the career sustainability of documentary professionals.

“The purpose of this report was to capture the conversations that have been happening in the field for so long,” Deluca said.

Deluca also addressed the conference’s main theme of cross-sector dialogue and stressed that although different mediums are becoming more interconnected than ever before, there is still much to be done in regard to bringing them together.

“While there are many collaborations happening, it is easy to forget that there is a whole lot of relationship building and education that needs to be put into place in order to build better working structures,” Deluca said.

“We’re very lucky. Folks are coming to our city for the arts and cultural opportunities,” Gedgaudas said. “We’re a highly collaborative city, with a lot of startups happening. The tech industry is coming in more and more.”

Joyce, founder of Underground Comedy, noted the growth that he has seen in the D.C. comedy scene and how a lack of opportunity led him to begin producing weekly shows.

“I was unhappy with the way comedy shows were being run in the city,” he said. “D.C. didn’t really have mid-level comics. There are a lot of great theaters, but only so many people can perform there.”

Glover also gave his thoughts on gentrification and changing demographics in the city, which he saw as having a mixed effect on his career as a musician.

“They just fixed the Wharf up, with the big theater [the Anthem], but our music is always downplayed,” Glover said. “But you also have lots of different people of all nationalities and races, from all different places, moving to Washington, D.C., and they’re curious about my music.”

The keynote interview, moderated by Bernard Cook, an associate dean in the College, spotlighted singer-songwriter Thao Nguyen. A native of Falls Church, Va., Nguyen is influenced by folk, country and hip-hop and has released seven albums since 2005. She is the subject of the intimate documentary “Nobody Dies,” which follows her bittersweet trip with her mother to her homeland of Vietnam.

Changing tone, local comedian Haywood Turnipseed Jr. provided the auditorium with some laughs while discussing his own experiences and performances.

Asked about the impact of today’s national politics on comedy, Turnipseed was pessimistic.

“When Obama was president, people liked laughing,” he said. “Now, they feel like they need to.”

The final event was a roundtable on public sector partnerships that explored the relationships between public, private, nonprofit and creative entities. Cynthia Lopez, media strategist and former commissioner of the New York City Mayor’s Office of Media and Entertainment, summed up the spirit of the conference.

“Every job I’ve had has been figuring out, with the resources we have, how can we have a productive conversation?” Lopez said. “At the crux of my career has been building partnerships between unlikely organizations.”