July 27
Jay Z & Beyoncé at FedExField
Queen B and J-Hova are coming to FedExField in Landover, Md., on July 27 and 28 to cement their reign as one of music’s biggest power couples. FedExField, a football stadium with a capacity of 82,000 people, is one of the few venues capable of hosting the combined star power of a hip-hop legend and a pop icon. Only a 10-mile drive from downtown, Landover will be hosting epic performances of hits like “Lemonade,” “The Story of O.J.” and “Drunk in Love.” Tickets start at $100.

July 28
Arctic Monkeys at The Anthem
The indie rock band Arctic Monkeys is going on a world tour to promote its new album, “Tranquility Base Hotel & Casino,” released May 11, 2018. The group is coming to The Anthem, a music venue and auditorium on the Southwest Waterfront of D.C. on July 28. Opened in October 2017, The Anthem has a moveable stage, food and drinks, shops and plenty of floor space and seating. See the Arctic Monkeys perform a distinctly modern style of rock music this July with tickets starting at $160. 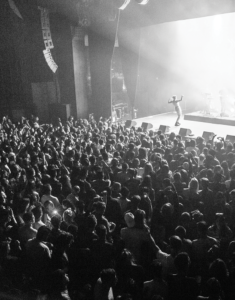 August 17
Mura Masa at the 9:30 Club
English DJ and electronic music producer Mura Masa is making a repeat appearance at the 9:30 Club on Aug. 17. Master of the party, Mura Masa crafts his electronic trap beats with immaculate attention to detail and has featured guests like A$AP Rocky and Charli XCX. His biggest hit, “Love$ick,” is sure to make an appearance, but fans should also expect some of his more laid-back jams like “U Never Call Me.” Renowned for its crystal-clear sound system and casual atmosphere, the 9:30 Club is just the place to dance the night away. Tickets for Mura Masa start at $47.

August 25
Beach House at The Anthem
The silky-smooth voices and production of dreampop band Beach House are taking center stage at The Anthem on Aug. 25. Building on the success of its May 11 album “7,” the indie favorite will be performing alluring tracks from the 2018 project like “Lemon Glow,” as well as past hits like “Space Song” and “Master of None.” Tickets start at $48.