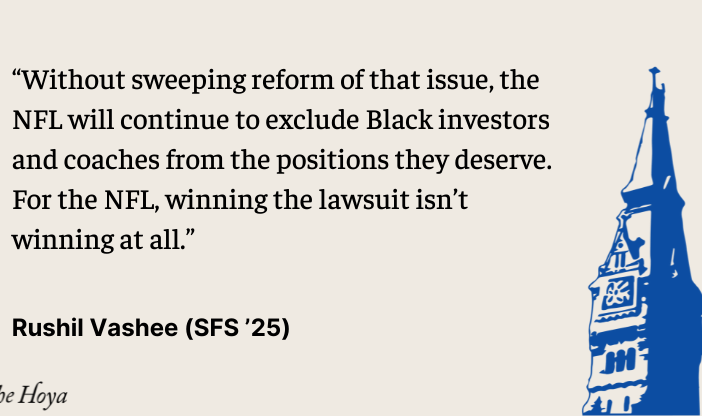 For years, the NFL has struggled to represent the racial diversity of its players in its front offices. While 70% of NFL players are Black, only about 9% of coaches are Black. Furthermore, no majority owners are Black.

This stems from decades of racial discrimination by a league afraid of diversity. Now, locked in a legal battle over systemic racism within the league instead of embracing inclusion and diversity, the NFL is continuing in its ways.

On Feb. 1, former Miami Dolphins head coach Brian Flores — later joined by two more former NFL coaches — filed a 58-page lawsuit alleging systemic racism and hiring discrimination by the NFL. For many, the suit offered hope that the league would be forced into a racial reckoning with its past and present, instituting policies to bolster the Rooney Rule, which mandates interviewing minorities for executive roles, and embrace racial equity.

Professor N. Jeremi Duru, a sports law expert at the American University Washington College of Law, was among those who recognized the lawsuit’s importance.

Duru, who has extensively studied and written about coaching discrimination in the NFL, spoke to the unprecedented nature of the suit.

“It’s important to point out how groundbreaking the lawsuit was,” Duru said in an interview with The Hoya. “I’m glad to see that [Flores] is coming up with some novel approaches, and I think that it should inspire others in that space to think creatively about how best to move the ball forward when it comes to equal opportunity.”

Flores’ lawsuit can create lasting change for a couple reasons. First, rarely before has an NFL player or coach openly criticized the league’s racism issues without subsequently being silenced or blackballed from the organization. Second, Flores included tangible strategies for racial inclusion in his lawsuit, ensuring that his cause doesn’t die with a legal settlement.

“He’s not just coming to the court seeking money; he’s coming seeking improvement of the league,” Duru said. “The greater likelihood is that the case is settled at some point, and I suspect that, if it’s settled, some of his proposals will be a part of the settlement.”

Now, though, the league’s response threatens to shatter any hopes for progress. Rather than conducting honest investigations and adopting Flores’ strategies, the NFL has resisted change, expressing its intention to compel the lawsuit into arbitration April 21, fighting to keep its racist systems in place.

Duru said that, if successful, arbitration would bury the case.

“One of the consequences of arbitration is that it pulls the matter out of the public space,” Duru said. “In this case, that adheres to the benefit of the National Football League.”

As a result, Flores’ attorneys have rightfully blasted the move.

“The NFL’s attempt to force these claims into arbitration demonstrates an unmistakable desire to avoid any public accountability and ensure that these claims are litigated behind closed doors,” his attorneys wrote in a statement the same day.

And they’re right. Given the recent developments, it is clear that the NFL wants this lawsuit to be settled privately, quietly and, worst of all, meaninglessly.

For this case, a private and quiet settlement directly inhibits social progress. Public pressure from the Flores lawsuit has uniquely forced the NFL to make some strides toward equity in recent weeks.

“The NFL has made adjustments to the Rooney Rule and made a move with respect to diversity on the offensive side of the ball within the coaching ranks,” Duru said. “I suspect that is in response — although the NFL has not articulated it as such — to the lawsuit.”

In March, the NFL announced that the Rooney Rule would require NFL teams to interview at least two women and/or persons of color for executive roles after the league owners held their annual meeting. The league also decided that every team must employ at least one woman or person of color as an offensive assistant.

But the more the NFL quiets the issue now, the less change they’ll have to make in the future.

Since Feb. 1, the league has been so focused on winning the legal matter that it has ignored the underlying issue. And without sweeping reform of that issue, the NFL will continue to exclude Black investors and coaches from the positions they deserve. For the NFL, winning the lawsuit isn’t winning at all.

Rather than fight against Flores, the league must reflect within itself. The strategies for the NFL to honestly commit to equity are readily accessible; it just needs to listen.