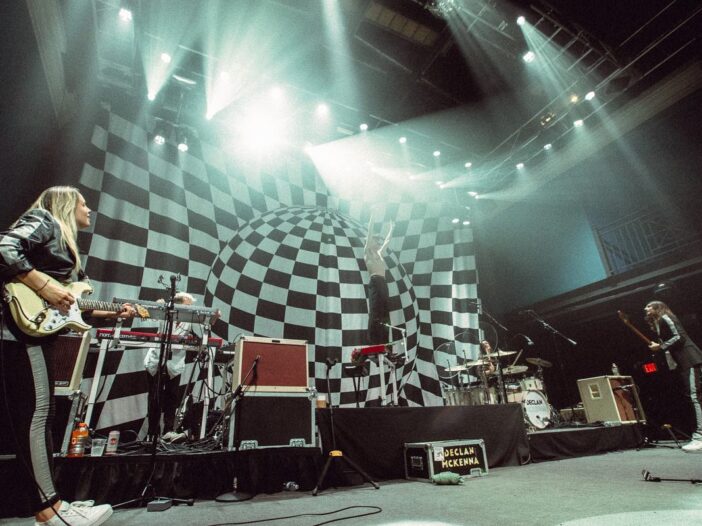 Just one strum of Declan McKenna’s glittered golden guitar was all it took to ignite the antsy crowd.

The 23-year-old indie-rock singer from London has made waves among American listeners, as his concerts have sold out nationwide to hear his newest album “Zeros” live. Some fans even waited as long as four hours before doors opened to get a front row spot for McKenna’s sold-out show at Washington, D.C.’s 9:30 Club on Oct. 12.

McKenna’s electric voice and progressive lyrics attracted a collegiate fanbase to the show. Few adults were present in the audience.

McKenna began his performance with “Beautiful Faces,” which hones in on the issues of personal and political inaction young people face in the modern day. McKenna uses his songwriting gifts to highlight the stressful realities young adults go through and shed light on global issues. These themes feature in most of McKenna’s new album, which comprised much of the setlist for the show.

The stage consisted of a trippy black and white checkered backdrop and neon strobe lights, but what made the set truly McKenna’s was the inclusion of a shiny disco ball. His performance props alluded to the idea that life is not “black and white,” a common theme in McKenna’s work.

McKenna played 14 songs, followed by five encore songs. While most of the setlist was from “Zeros,” McKenna included popular tunes from his 2017 album,“What Do You Think About the Car.”

Some of McKenna’s songs are especially vibrant for concerts, such as “Rapture” and “Twice Your Size,” but most of his songs contain melancholic but optimistic lyrics that match his folk-adjacent sound.

McKenna uses his lyrics to express frustrations with and bring awareness to current political debates, such as British foreign policy toward arms trading. These themes do not overtake his music, however, as they emerge while listening intently to McKenna’s lyrics. Unfortunately, while elegantly written, these nuanced ideas are not always apparent to casual listeners.

For example, “I Am Everyone Else” and “The Kids Don’t Wanna Come Home” voice McKenna’s frustration with the lack of youth representation in politics and political inaction. But McKenna’s lyrics are poetically dense, requiring several listens to fully comprehend. Those who casually tagged along to the concert with a friend may not have grasped the call for change embedded within the song, resulting in wildy different concert experiences.

It was evident that McKenna was at the 9:30 Club to perform, and perform only. He began his performance without an introduction, only making quick comments after the first song. This disconnect with the audience only continued, as McKenna struggled to reach the crowd on a personal level.

Usually, an artist explains the meaning of the song they are going to perform for new listeners in the audience. Annie DiRusso, who opened for McKenna, gave a brief explanation before each of her songs about what inspired her lyrics. Although not a well-known artist, DiRusso established a connection between her music and the fans by sharing stories about her musical journey — a connection McKenna did not achieve.

Additionally, McKenna rarely moved from one spot on the stage while performing. He mostly stood in front of the microphone and played his guitar. His lack of movement on stage was reflected in the audience, who stood calmly with little movement in response.

McKenna’s music is moody and brings up melancholic feelings, but more could have been done to connect with the audience.

McKenna’s impressive singing and guitar skills are not up for interpretation. The audience watched in awe as he skillfully strummed his collection of guitars through the set with a beautiful voice to match.

Although McKenna’s music may have a different meaning to each listener, his music still emotionally resonates with listeners, which could be felt throughout the venue.

Though McKenna was far from his birthplace, his music hit close to home for many fans in the crowd. It was evident from the fans’ engagement in the crowd that McKenna’s performance bridged a connection between his lyrics and his fans, even if his personality did not match. With a bit more connection with his crowd, Delcan McKenna could elevate his status as an artist to new heights.