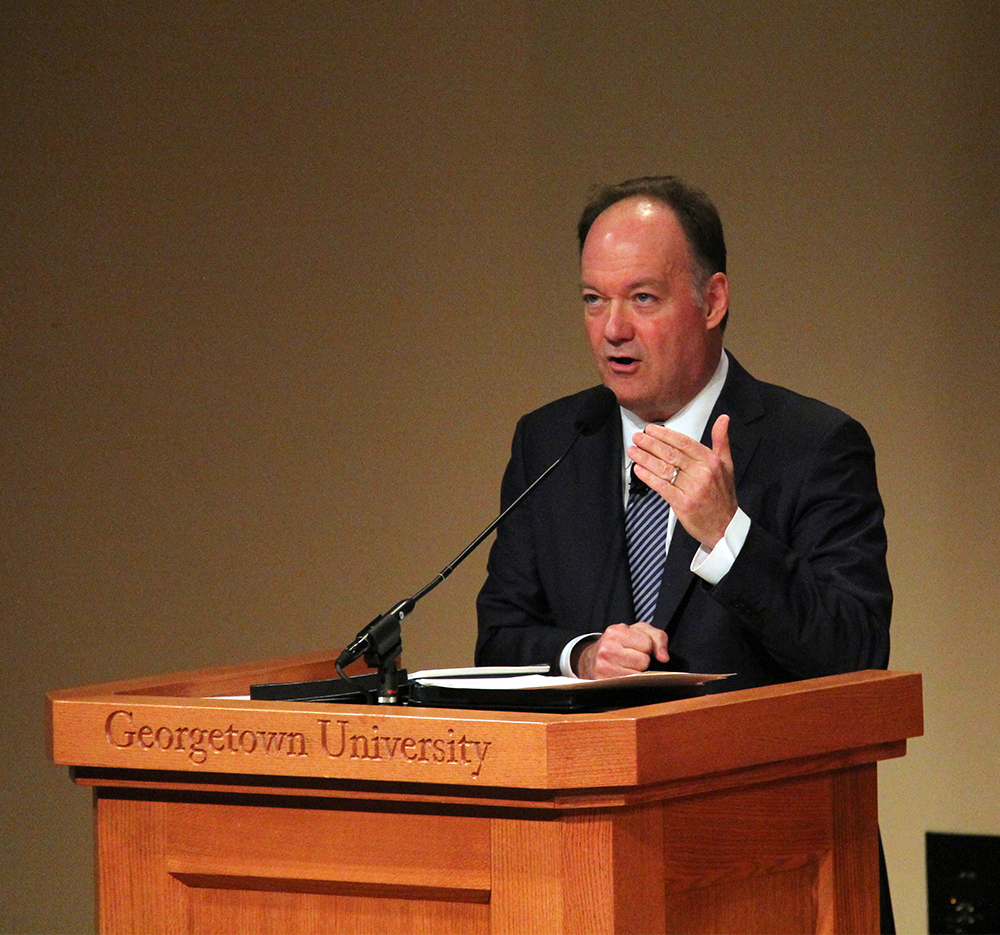 University President John J. DeGioia announced four new commitments to address Georgetown’s engagement with race, including the expansion of African American studies to include a major, during his “Racial Injustice in America: A Framework for Georgetown’s Future Engagement” address in Lohrfink Auditorium last Thursday.

DeGioia enumerated four explicit commitments, beginning with an expansion of the AAS program to a full department and major as well as the establishment of a research center dedicated to studying racial injustice. He also noted that a substantial recruitment effort will be made to hire the faculty needed for the department and center along with the appointment of a new senior officer to support the aforementioned initiatives.

DeGioia said the formation of the AAS department will revolve around interactions between a variety of different fields and departments. He asserted that the committees involved with the initiatives will ensure that the new department will flourish through such interdisciplinary efforts.

“We recognize that to draw from the full resources of our community it will be important to determine how best to capture the ‘interdisciplinary’ character of this work.” DeGioia said in his speech. “Our working group will need to explore whether the structure of a traditional department will support interdisciplinary work that crosses the full range of schools and disciplines that can contribute to this effort.”

For students planning to major in African American studies, and for others who want to take classes within the program, the addition of a new department comes after a lobbying effort begun last year with a petition and meeting with Dean of the College Chester Gillis.

The African American studies program also conducted a survey of students regarding the potential feasibility of an AAS department, major and students’ interest in specific classes in 2015. The AAS program was initially formed in 2004 for students hoping to minor in AAS and is now being transitioned to a full academic department.

According to Olivia Holmes (COL ’16), the effort has been years in the making, with the demand of students to take classes within the program measured by waitlist counts of 30 or more.

“With the creation of [an AAS] program, students have had the opportunity to take classes with professor of English and African American Studies Angelyn Mitchell, who helped found it, and it geared a lot of interest in creating a major,” Holmes said. “Since I’ve been here, the advocacy started with the Last Campaign for Academic Reform, which created the diversity [requirement], and from that push there’s also been a movement behind creating an African American studies department here, since the program is such an interesting thing and has so much depth.”

In order to continue to facilitate the development and progress of the commitments, DeGioia also authorized the recruitment of four professors for the upcoming school year and another four for the following year. Holmes noted how such an effort to increase faculty should also increase interdisciplinary study and the overall success of the initiatives.

“That’s the real push that I think a lot of students wanted across the country when it comes to African American studies, and just diversity of faculty,” Holmes said. “More faculty would be the best thing that the major’s doing, and it also gives us more options for interdisciplinary study and … we don’t have the opportunity to do so currently.”

While DeGioia did not provide a timeline for the commitments’ implementation, Bria Wade (COL ’19), a student interested in the program and excited for the new initiatives, hopes to be able to officially declare her major some time next year.

“From what I am aware of, hearing last semester and more recently, I expect the major to be solidified by next year, and that’s what I’m banking on,” Wade said.

Wade said she appreciated the commitment to make sure the programs are interdisciplinary, arguing that an AAS program needs to encompass a wide variety of different academic fields in order to be a program with depth.

“I can definitely see something that requires a deeper exploration of the African diaspora, so maybe an African studies course, an anthropology [class],” Wade said. “A little bit of everything. African American studies isn’t just African history in the U.S. or the Caribbean; it’s much more expansive.”

DeGioia stressed that the formation of the department and major, along with the planning of the other initiatives, will be careful, but it will not slow the process of innovation.

“I commit Georgetown to making these important new investments,” DeGioia said. “These will happen. But we will do so as we do all important, successful work —together, listening to one another, letting all who can contribute to participate in the new endeavors and working together to achieve our goals. These discussions will not be about whether we do these things, but how best to do them in the urgency of the moment.”