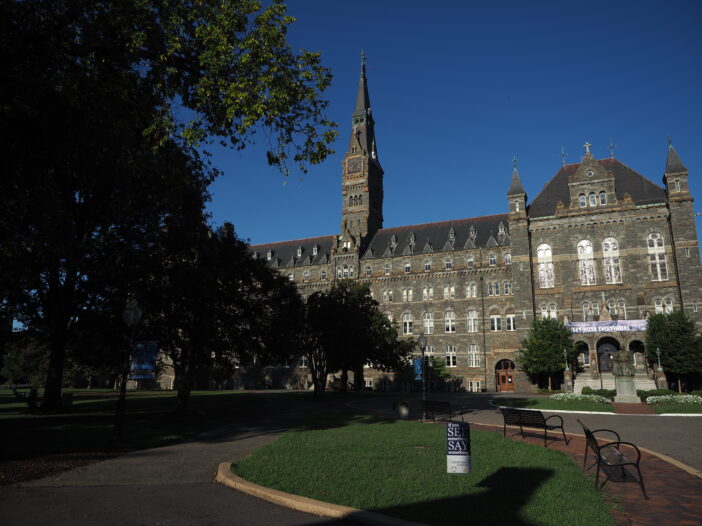 Georgetown University announced its support for new regulations proposed by the Department of Education that would strengthen Title IX protections for students by addressing sexual misconduct guidelines.

University President John J. DeGioia (CAS ’79, GRD ’95) submitted a formal comment to Secretary of Education Miguel Cardona, in which he advocates for the federal government to strengthen Title IX guidelines related to sex discrimination and sexual misconduct, according to a statement posted on the university website Sept. 13.

DeGioia’s comment follows the Department of Education’s release of the proposed changes for public comment June 23, 2022, the 50th anniversary of the passage of Title IX.

“Over the last 50 years, Title IX has paved the way for millions of girls and women to access equal opportunity in our nation’s schools and has been instrumental in combating sexual assault and sexual violence in educational settings,” Cardona wrote in the release. “We welcome public comment on these critical regulations so we can further the Biden-Harris Administration’s mission of creating educational environments free from sex discrimination and sexual violence.”

A series of listening sessions with students, faculty and staff informed DeGioia’s comment, according to a university spokesperson.

“Over the course of the listening sessions, we heard meaningful feedback and questions from students, both undergraduate and graduate, faculty and staff who are committed to preventing sexual assault and misconduct on our campus,” the spokesperson wrote. “We are grateful for our community’s respectful and diverse engagement on these complex issues.”

DeGioia also wrote that it is crucial to lower barriers to reporting, particularly for students of color, who have historically tended to avoid reporting incidents of sexual misconduct due to a lack of trust in judicial systems, according to two surveys the university conducted in 2016 and 2019.

“The student conduct system is not — and should not be — a substitute for the criminal or civil courts,” DeGioia wrote in the comment. “By requiring colleges to mimic courtroom procedures, and mandating opportunities for cross-examination by advisors, the current regulations deter certain students from reporting, create potential inequities and therefore allow misconduct to go unaddressed.”

In his official comment, DeGioia also indicated the proposed provisions that could use additional clarification from the Department of Education.

DeGioia and the university have historically shown support for expanding Title IX protections — in 2019, Georgetown submitted a formal comment urging the Department of Education to adopt regulations that encourage similar protections as the 2022 proposals.

The university will continue to advocate for Title IX protections moving forward, according to Rosemary Kilkenny, vice president of diversity, equity and inclusion and chief diversity officer for the university.

“Our work to eradicate all forms of sexual assault and misconduct will never stop,” Kilkenny wrote in the Sept. 13 statement. “We still have work to do, and we will be relentless as we continue to create a more supportive and safer educational and work environment where every member of our community can pursue their very best work and thrive.”

This story was updated to reflect additional comments from the University.